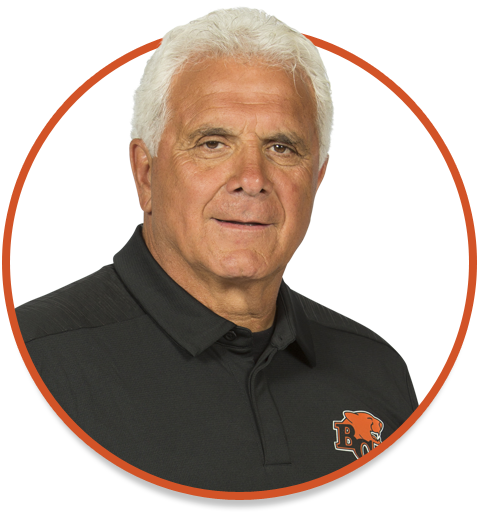 The 2018 season marks Wally Buono’s 16th year with the Leos, his seventh as VP of football operations and his 12th as the team’s head coach. In November 2017, Wally stepped down as GM following 15 seasons in the role, appointing Ed Hervey in his place.

Wally had also previously retired as head coach following a remarkable nine-year run and a Grey Cup title in the 2011 season. The win brought to a close, a record-setting tenure in which he ultimately led the Lions to two Grey Cup wins in 2006 and 2011. Through 2017, Buono has coached BC Lions teams to ten playoff appearances; seven Western Finals and a crossover visit to the Eastern Final. He returned to the sidelines in 2016.

In a coaching career that has spanned two stints in BC and 23 years overall after a 13-year run in Calgary, Buono has led his teams to five Grey Cup championships and 13 regular season division titles. In 2009, Buono surpassed Don Matthews’ 232 victories to become the all-time leader in CFL coaching wins and finished his amazing career with a regular season record of 254 wins, 154 losses and three ties.

In recognition of his numerous accomplishments as a coach and general manager as well as his dedication to Canadian football, Wally was awarded the Order of Canada in 2015 and he was inducted into the Canadian Football Hall of Fame in 2014.

Born in Potenza, Italy, in 1950, Wally moved to Canada in 1953 with his family, later playing minor football in Montreal. He attended Idaho State University and was a linebacker for the Bengals. Wally returned to Canada and played 10 seasons with the Montreal Alouettes as a linebacker and punter, appearing in 152 games.

Shortly after his retirement, Wally tried his hand at coaching, landing an assistant position with Montreal in 1983. Four years later, Wally joined the Calgary Stampeders and worked under Larry Kuharich until 1990 when Stamps president Norman Kwong hired him as head coach.

In addition to his accomplishments as a coach and administrator, Wally is a noted contributor to the community and was recognized for his work with the Paul Harris Award in 2001.

Wally continues to donate a significant amount of time as an ambassador of the Royal Columbian Hospital Foundation and as a spokesperson for the Heart and Stroke Foundation. Among his charitable efforts, Wally is actively involved with Operation Christmas Child, giving presents of clothing and toys to children of impoverished nations. Following the passing of his good friend and former teammate Tony Proudfoot in 2010, Wally lends his support to the ALS Society of BC’s WALK for ALS.