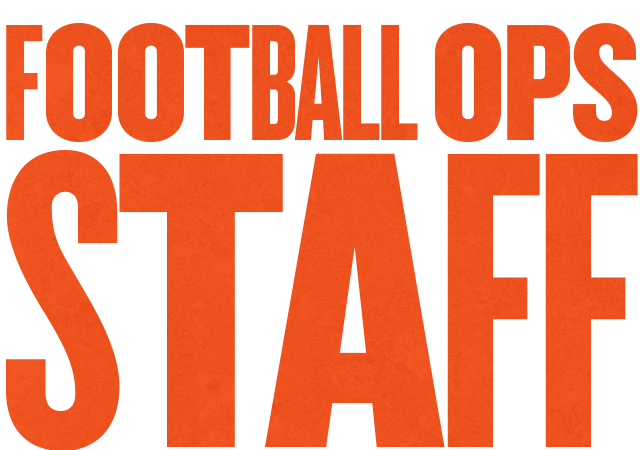 The 2023 season marks Neil’s 28th year as a member of the BC Lions, seventh year as the club’s director of football operations and second as Co-General Manager. A native of Surrey, he handles many of the day-to-day activities of the football operations department including player contracts, training camp, travel logistics and scouting preparation.

Neil also plays a key role in the evaluation of Canadian talent for the CFL Draft alongside Rob Ralph and Geroy Simon while also working with GM Ed Hervey and the club’s personnel staff.

Neil joined the BC Lions in 1995 in the ticket sales department. He subsequently moved on to media relations in 1997 before becoming the player personnel coordinator two years later.

Neil graduated from Kwantlen University College and played with the Surrey Rams before joining the Lions. He has two sons, Logan and Spencer and lives in Surrey with his partner Keri. He spends numerous hours as a coach in minor football and lacrosse. Away from the field, he is an avid reader and podcast listener.

Ryan enters his second season as assistant general manager. He returned to the Lions in 2021 as Director of U.S. Scouting after serving in the role from 2013-17, during which he recruited and signed many of the squad’s key American players.  In December 2021, he was promoted to Assistant GM. He had spent 2018-20 as Director of College Scouting with the Winnipeg Blue Bombers where he won a Grey Cup ring in 2019. The Spokane, Washington native began his football career as a contributor for Scout.com from 2002 to 2005. Establishing a network of contacts throughout the NFL, AFL and NCAA, Ryan was named the director of player personnel for the Arena Football League’s Spokane Shock in 2006 and then added the GM title in 2010.

Ryan’s keen eye for talented players resulted in an 88-31 record for the Shock during his time there including three league championship appearances and two titles in 2009 and 2010.

Ryan makes his home in North Carolina and in addition to attending numerous collegiate pro-days and NFL preseason games also coordinates the efforts of regional scouts.

2023 marks Rob’s fifth year with the BC Lions and fourth as the top Canadian scout in charge of evaluating talent for the CFL Draft.

Prior to joining the Lions in 2019 as a regional scout, Rob spent 20 seasons with Edmonton where he began as video coordinator and was promoted to offensive assistant under head coach Danny Macocia for the 2008 season.

Rob graduated from the University of Western Ontario in 1998. He is also a graduate of the Northern Alberta Institute of Technology (NAIT) Radio and Television program.

He and his wife Joanne have two sons, Charlie and Andrew. The family resides in London, Ontario.

Jim began with the Lions as director of US scouting in January 2022 and works closely alongside Neil McEvoy, Rick Campbell and Ryan Rigmaiden in evaluating talent at the pro and college levels across the United States. After playing defensive back for the University of North Carolina from 1984-88, Jim would go on to play five seasons in the Canadian Football League, beginning with Calgary in 1989 and continuing with stints in Edmonton (1990-91) and Hamilton (1992-93).

Following his playing career, he became a college scout for Pro Football Hall of Fame general manager Bobby Beathard with the San Diego Chargers in 1994. In 2004, he moved to the Cleveland Browns and was promoted in 2006 to be the associate director of college and pro scouting until 2010.

He would return to the Chargers from 2010-14 and then moved on to the New York Jets in 2015 as a national scout where he remained until 2018.  Jim then moved back north to serve as the director of pro scouting with the Toronto Argonauts. He returned home to Charlotte to run his own business for two years before joining the Lions in his current role.

Jim played together with his brother Joey at the University of North Carolina and in Hamilton with the Tiger-Cats. He lives with his daughter Sienna in Charlotte, North Carolina.