HEART OF A LION AWARD

The BC Lions Football Club have launched a program to recognize British Columbians whose notable efforts make a positive impact, by awarding them with the “Heart of A Lion” Award.

To have a “Heart of a Lion” means to be a leader in the community, to give to those in need, to educate, and to inspire others to participate. The BC Lions, along with partner Amacon, would like to recognize and celebrate our local heroes with your help, our fans, by nominating someone you believe has the ‘Heart of a Lion’.

Do you know someone who embodies what it means to have the Heart of a Lion? Let us know! 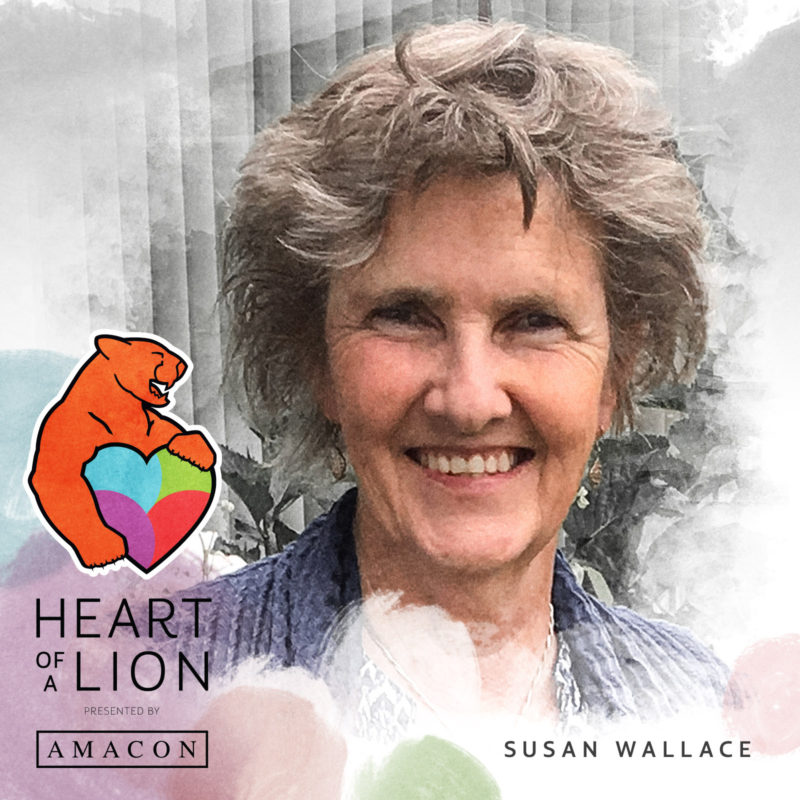 For over 30 years, Dr. Susan Wallace has served her local community as an eye doctor. Yet her “Heart of a Lion” has been best demonstrated when serving those less fortunate.

For 16 years, Dr. Wallace has coordinated a meal service that provides food to those struggling on the downtown eastside of Vancouver.

On top of providing meals and donations, Dr. Wallace recruits and organizes other volunteers. This dedicated group makes meals for hundreds of those in need every Sunday and Tuesday.

Sue’s impact has also been felt internationally. She has worked to establish and run a medical clinic in Africa that provides free eye care- including surgery- to people across Zambia. The high quality of care has also attracted patients from neighbouring Botswana and Zimbabwe.

Her work at the clinic has also involved the recruitment of volunteer surgeons and the fundraising necessary to obtain the needed drugs and supplies.

Dr. Wallace is also the director of a charity organization that was founded to ensure the clinic’s long-term success. They continue to train local physicians and staff to continue ongoing care.

Sue’s actions have no doubt had a profound impact on countless individuals in need. Congratulations Dr. Wallace!

NOMINATE A HEART OF A LION HERO

Nominations are open to any individual, group, or organization that you believe embodies the virtues of a BC Lion. Someone who has shown leadership, perseverance, community stewardship, and deserves to be recognized by fellow British Columbians for their contributions. 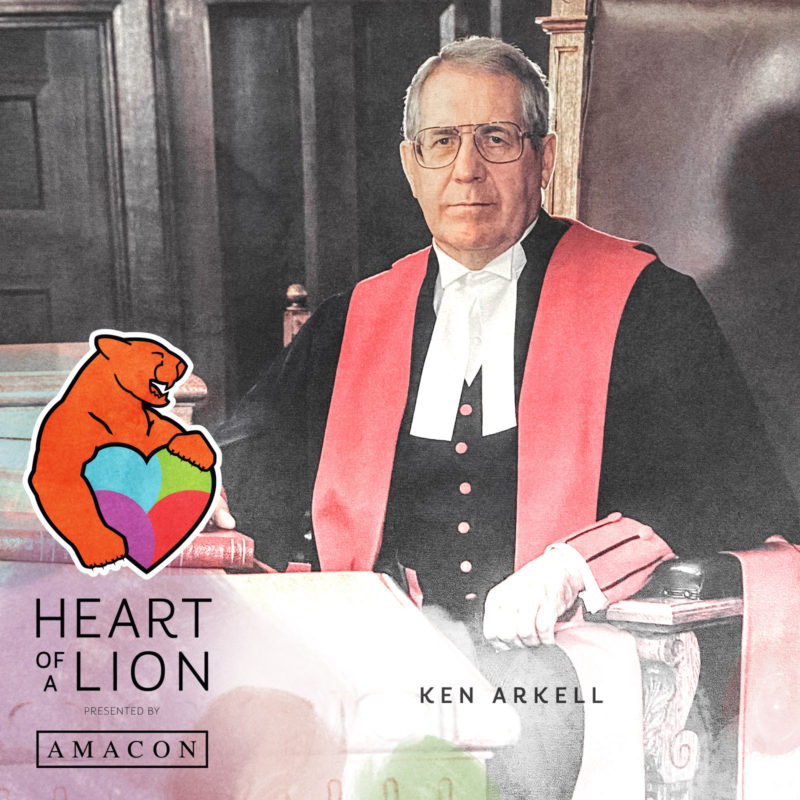 Ken Arkell suited up for the BC Lions as a lineman in 1956 and 1957, yet that’s far from the only impressive note on his resume.

After starting out in law enforcement, being accepted to medical school and spending 30 years as a Judge on various levels of provincial courts, Ken can definitely say he has the Heart of a Lion!

Ken left his family farm in Southern Ontario and decided to join the RCMP. It was the Mounties that first brought Ken to British Columbia, where he was first posted in Ocean Falls, a small Northern BC community that was policed entirely by boat.

He then moved to New Westminster and primarily worked prison escort duty between BC Penitentiary, Okalla Prison Farm and BC Supreme Court.

It was while he was still playing football when he started studying Law at UBC, noting that Friday and Monday games made it hard to get to class and keep up with fellow students.

Ken still managed to get his degree and it was back up north to Dawson Creek where Ken began practicing law. A few years later, he was appointed Provincial Court District Judge for the Peace River Region.

During his time as Associate Chief Judge of the British Columbia Provincial Court, Ken authored the new Provincial Court Act in 1975 which would establish new rules in regards to salaries, pensions, security of tenure and administrative independence, all based on his own research.

He finished his career by serving on the Supreme Court of British Columbia from 1990-1999 in Vernon and Kelowna. Since his retirement, he has enjoyed time with his wife of 60 years, Olivia, his children and grandchildren while spending most winters in Texas and then Arizona before returning to Kelowna full-time. 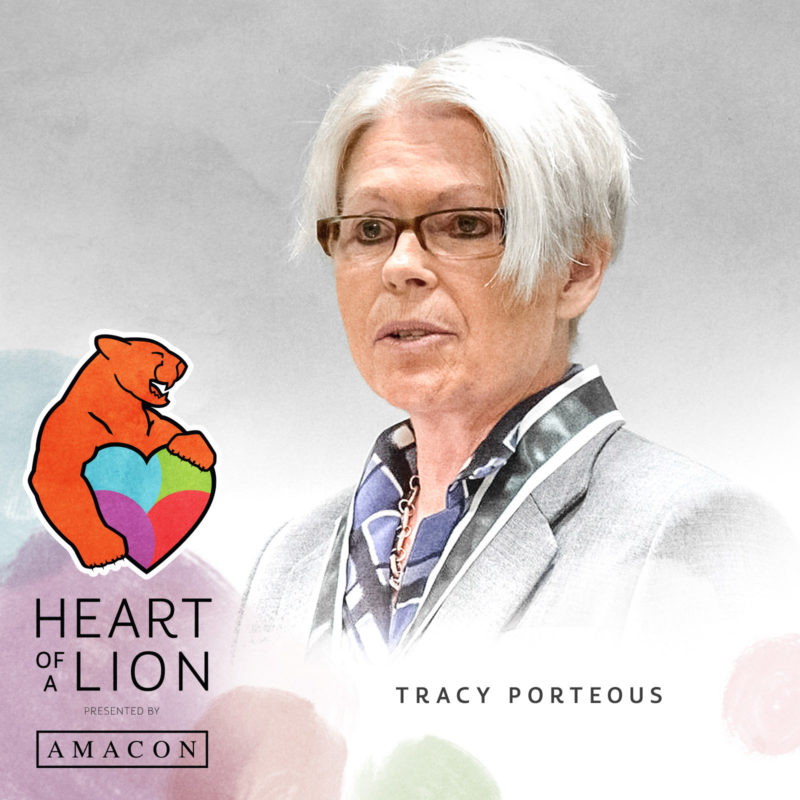 Tracy Porteous is a Registered Clinical Counsellor in BC active in the anti–violence field for over 30 years. She became the Executive Director of the Ending Violence Association of BC in 1995, a provincial association that supports over 220 anti-violence programs across BC who specialize in responding to sexual and domestic violence, child abuse and stalking.

In 2011, Tracy led EVA BC to a long-standing partnership with the BC Lions who teamed up to deliver the Be More Than A Bystander program to help break the silence on gender-based violence. Today, the Be More Than A Bystander program has expanded to include other teams in the CFL as well as other organizations. Here in BC, the Lions continue to partner with EVA BC to raise awareness and provide education related to gender-based violence. More than 205,000 people have heard the program’s crucial message delivered by the Lions’ players and EVA BC primarily to students in high schools across British Columbia.

Tracy is a member of the Provincial Integrated Recovery Council of BC, the National Victim Policy Centre’s Advisory Committee and was appointed to the Canadian Delegation to the United Nations Commission on the Status of Women.

Tracy was one of five women from across Canada honoured with the Governor General’s Award in Commemoration of the Persons Case. Most recently in 2020, she deservingly received the honour of the Order of BC. Tracy truly represents what it means to have the Heart of a Lion. 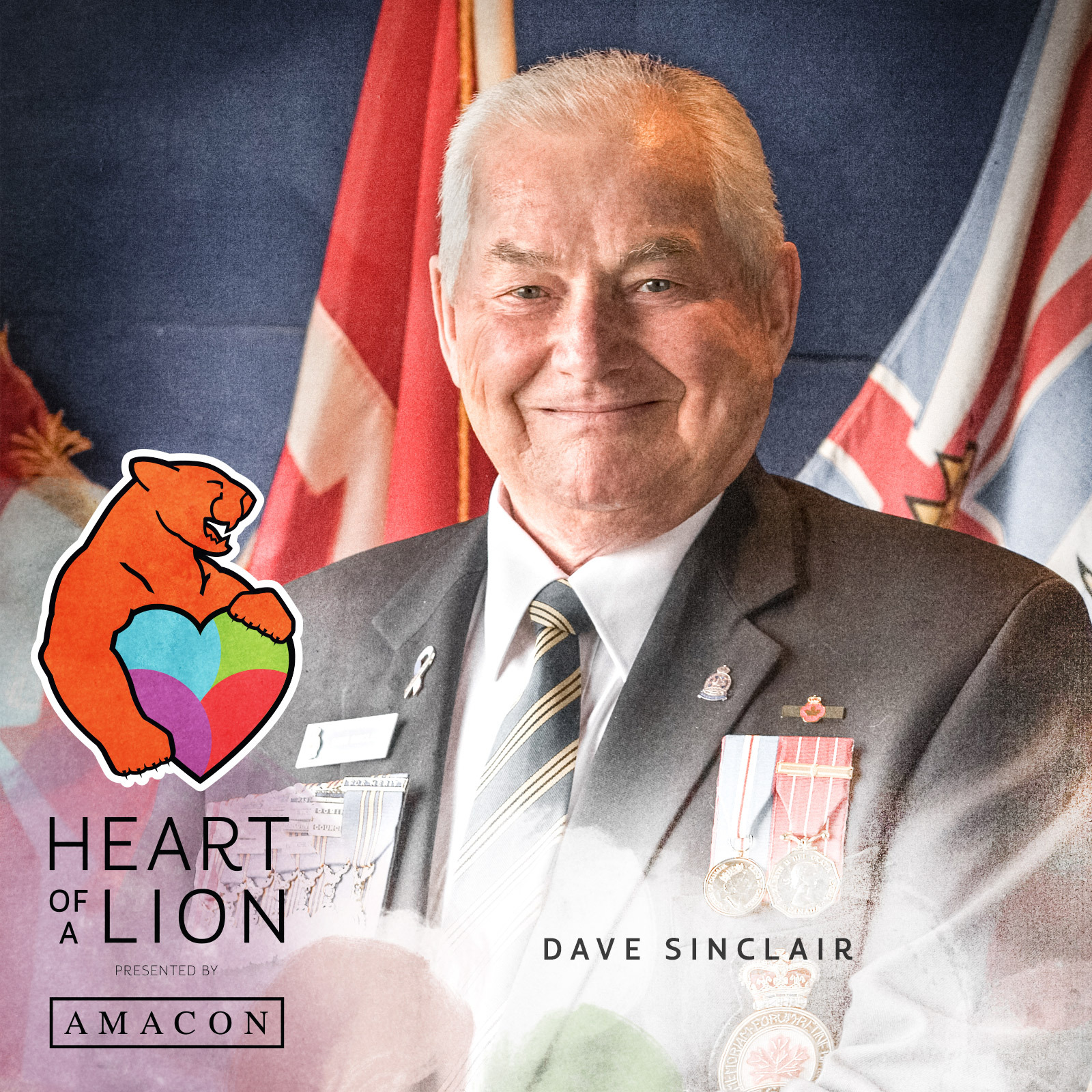 Our newest honoured recipient of the Heart of a Lion Award is a true Canadian hero and major pillar of his local community. David (Dave) James Sinclair started in the Royal Canadian Navy during the Korean War in 1953 and would go on to serve in the RCN for 25 years in a number of key roles.

Along with serving on numerous ships in the Pacific, Dave also served on the Australian Aircraft Carrier HMAS Melbourne and was also loaned to the United States Navy where he served at Pearl Harbour in a naval communication facility.

After leaving the Navy, Dave joined Communications Canada as a radio inspector where his main duties were technical inspections for the broadcast industry which included radio, television and cablevision systems. He also became senior radio inspector for deep sea shipping on Vancouver Island where he was in charge of foreign freighters, passenger ships and drill ships and was promoted to Operations Manager for Vancouver Island and the Gulf Islands for the remaining six years of his career. Immediately after his retirement in 1994, Dave was the supervisor of all 675 vehicles at the Commonwealth Games in Victoria.

In November of 2012, Dave was elected President of the BC Seniors Living Association (BCSLA), a position he held for two years.

Dave also served six as the President of Legion Manor Victoria, a 143- unit housing complex located in Central Saanich, BC. During his term in office he was instrumental in raising over $14 million dollars and built a 68-suite ($8.6M) assisted living complex for low-income seniors on their 5- acre property in Central Saanich. Presently (January 2019) he is working to develop another seniors housing community on the Saanich Peninsula following on the success of Legion Manor.

Dave met and married his wife Anne in 1957. They have two children, two grandchildren and two great grandchildren. 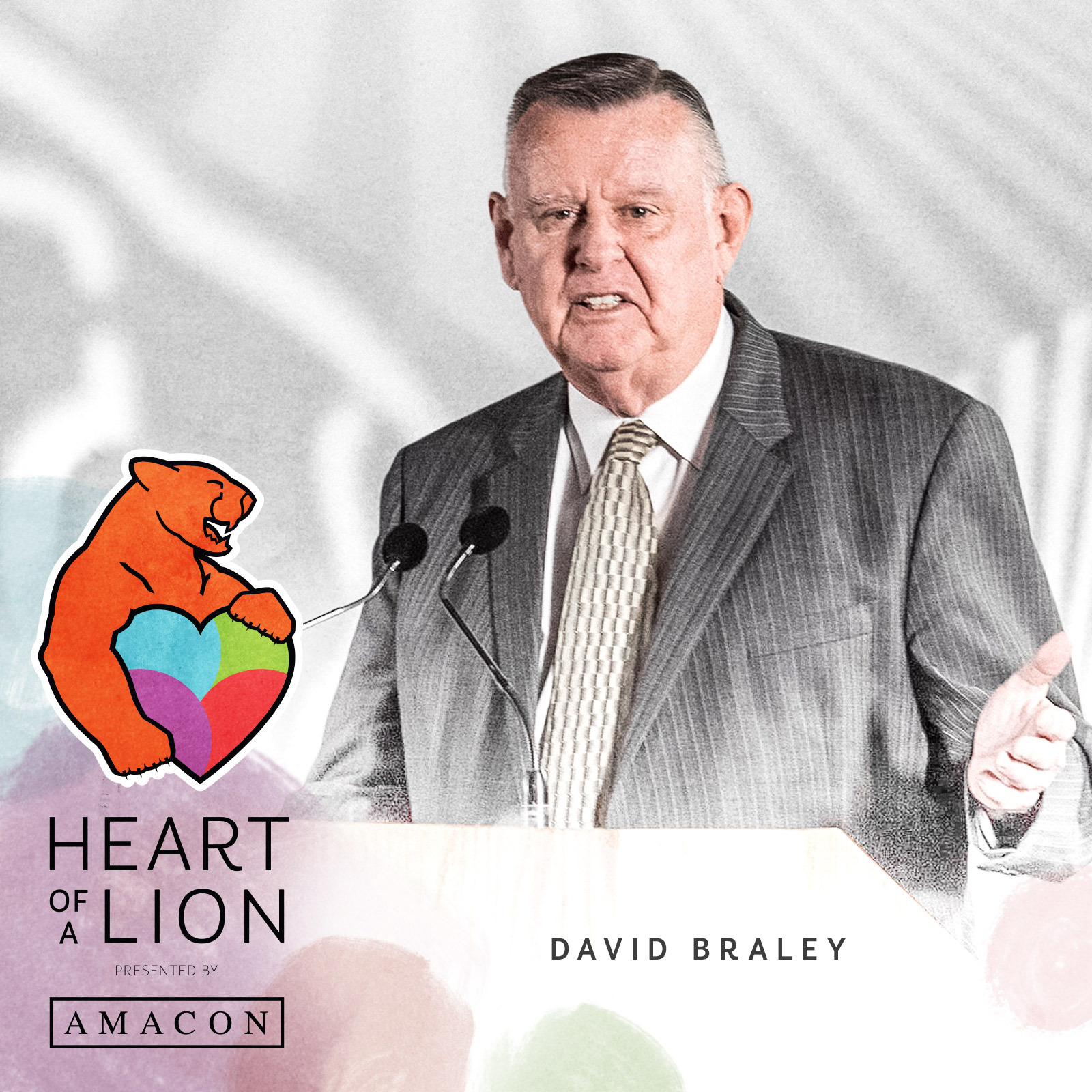 You would be hard pressed to find anyone that epitomizes the phrase “Heart of a Lion” more than our late owner and champion, David Braley. Affectionately known as “Mr. B” to those in the Lions organization, he took over as caretaker of the franchise in November of 1996, ultimately rescuing British Columbia’s oldest and most successful sports franchise from financial turmoil.

He is also an honoured member of the Canadian Football Hall of Fame, BC Football Hall of Fame and McMaster Hall of Fame. Not only did Mr. B’s ownership result in one of the greatest turnarounds in CFL history both on and off the field, the Lions became great pillars in communities across the province and regularly visited 150 schools per year prior to 2020.

Mr. B was also a champion when it came to his community work and philanthropic contributions, donating over $125 million to various organizations during his career. These included $50 million to McMaster University’s medical school and $10 million to Hamilton Health Sciences for a new cardio, vascular and research institute.

In his honour, the Lions will not only continue to win football games but also carry on the legacy of being great leaders and ambassadors in the community. Mr. B truly did possess the Heart of a Lion!

A SPECIAL THANK YOU TO OUR PRESENTING PARNTER