They both believe they have the talent to play quarterback in the CFL.

Now what Greg McGhee and Keith Price are looking for is the opportunity.

The two quarterbacks were among 27 players who participated in a BC Lions mini-camp. When training camp opens next month Jonathon Jennings and Travis Lulay will compete to decide who starts and who becomes the backup in BC this season. That leaves McGhee and Price to battle for the third-string job.

Of the two, McGhee may have more to prove come training camp. The 23-year-old from Pittsburgh was with the Lions last season. He spent eight weeks on the practice roster before dressing for the final nine regular season games. His body of work consists of competing two of six passes for 28 yards and rushing three times for 10 yards and a touchdown.

The signing of Price, who spent two years with the Saskatchewan Roughriders, could be a message the Lions are looking for someone else to groom for the future.

McGhee knows he must show patience and mental resilience if he hopes to stick with the team.

“You have to stay mentally positive,” he said. “The more you stay positive mentally, the better you can perform out on the field.

“It’s one of those things where you put your head down and keep grinding.” 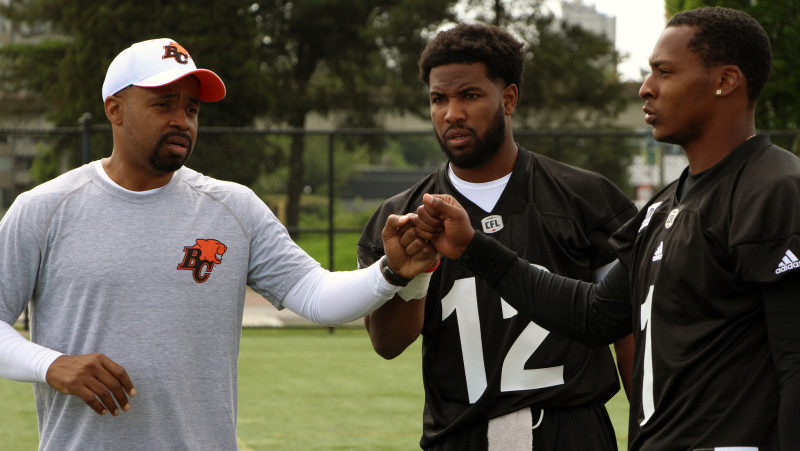 What McGhee needs to do is show the coaching staff he’s progressed in his development.

“A couple of the guys were telling me last year that the No. 3 quarterback is like a revolving door, circling around with different guys,” he said. “I did everything I possibly could in the off-season to prepare. I feel like I am prepared for everything.”

Wally Buono, BC head coach and general manager, said McGhee will be given a chance to compete.

“He is a year better than he was last year,” said Buono.

He dressed for 17 games with the Riders but most of his playing time came in the final three regular season games last year where he completed 32 of 50 passes for 407 yards, three touchdowns and an interception.

“The little time I got I tried to take advantage of it,” said Price, who was born in Los Angeles and played his college football at the University of Washington, not far from Vancouver. “I thought it was awesome.

“I thought I played well, I thought the team played well around me. We were able to put some points on the board.”

After university, Price spent time in Seattle Seahawks camp before going to Saskatchewan.

“I’ve been bouncing around but it’s football,” he said. “I thought this was a great place, a great opportunity.

“I was brought in (to BC) to add depth. I feel like I can play with the best of them. I have a high, high expectation for myself and hopefully I can be an all-time great one day.”

Buono was impressed with what he saw in Price.

“I liked his size,” he said. “He does throw the ball better than I anticipated. He knows where the ball is supposed to go, he reads the coverages. His accuracy was better than I thought.

“We wanted to get a young guy in here that has paid his dues and was looking to get a fresh start.”

Considering how many quarterbacks were hurt in the CFL last year, Buono could keep both Price and McGhee for the season. He might even bring in someone else.

“I don’t want to get into who we are keeping or who we are cutting,” he said. “You’re not going to get rid of a good quarterback and a good football player.

“You’re allowed to have so many players on your roster. There are ways to keep good players around. You can never have too many good quarterbacks.”

Jennings’ Cinderella rise through the ranks last year shows the importance of having depth at quarterback. The 23-year-old from Columbus, Ohio, began 2015 as the Lions’ third-string quarterback.

He moved into the starting role after Lulay and John Beck were both injured. Jennings won three of his six starts, completing 142 of 215 passes for 2,004 yards and 15 touchdowns. He also rushed 26 times for 127 yards.

“We all were in the same meeting room,” he said. “We did everything the same.

“He got his opportunity and took it and ran with it. Opportunities can happen to anyone. You just have to be ready for it.”

“We all were in the same meeting room. We did everything the same. He got his opportunity and took it and ran with it.” 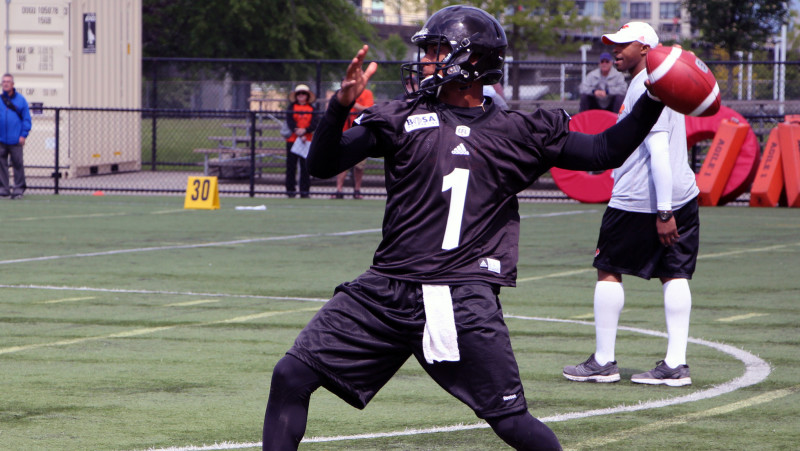 Price came to BC because he wanted to return to the West Coast. He hopes to learn from Jennings and Lulay and eventually become a starter.

“I’m a competitor. I like to compete. I’m here, just doing my role, trying to better myself so I can better the team. I have high, high expectations for myself. Hopefully I can be an all-time great one day.”