Primer: What you need to know about Tuesday’s CFL Draft 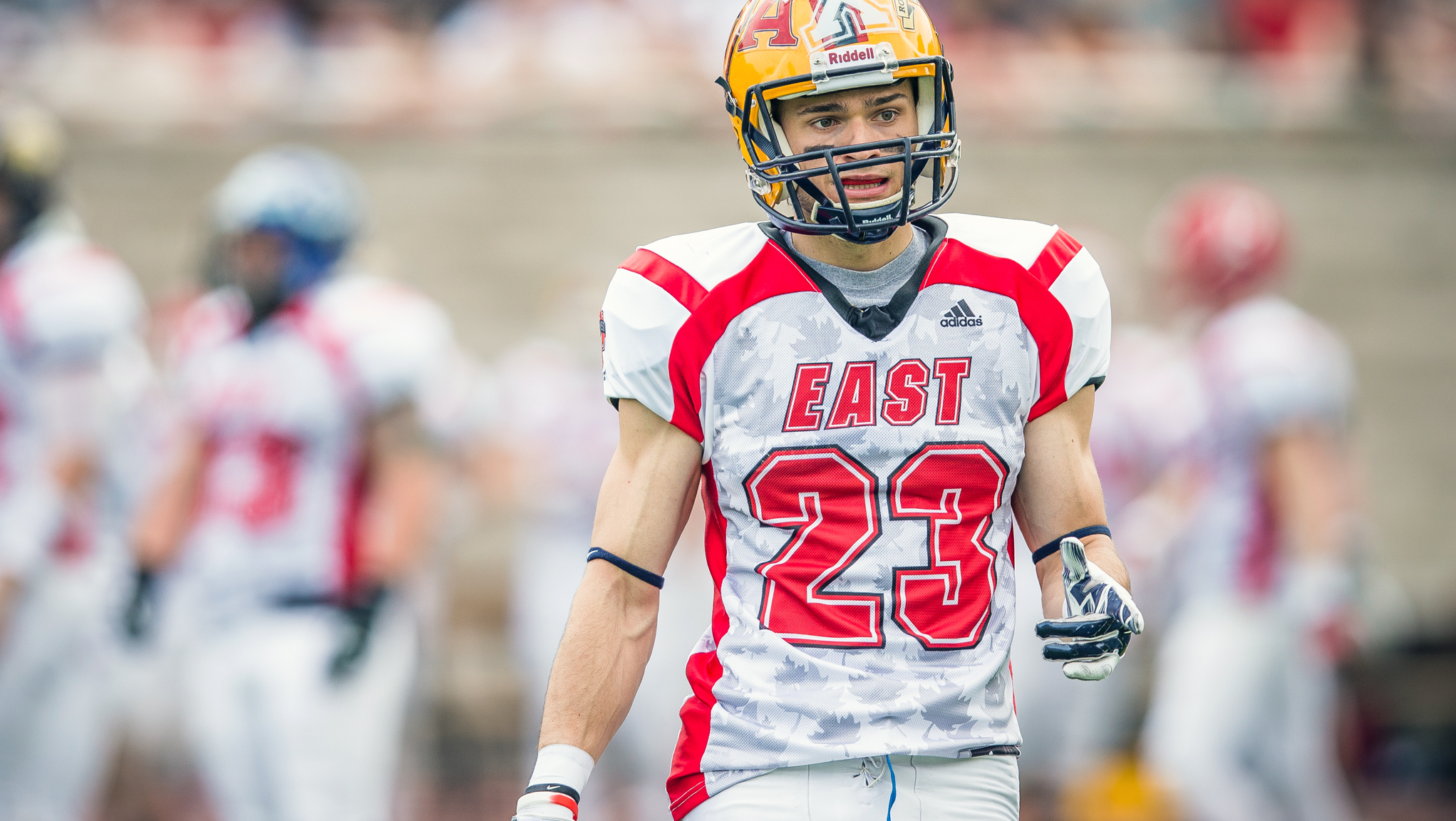 Primer: What you need to know about Tuesday’s CFL Draft

TORONTO — Plenty of intrigue surrounds the 2016 CFL Draft, which kicks off Tuesday, May 10 at 7 p.m. ET. From Laval’s chance to make history to the trades that have affected the order, here’s what you need to know going into Tuesday night:

The priority draft order was set in reverse order of the 2015 CFL standings, with the Saskatchewan Roughriders holding the first overall pick and the Grey Cup Champion Edmonton Eskimos capping things off. The selection order for Round 1 is as follows:

*Winnipeg forfeited its first round selection in the supplemental draft to select Garrett Waggoner.

2. Why are there only eight first round picks?

The Bombers used their 2016 first round selection to win the rights to Garrett Waggoner in last year’s supplemental draft. Waggoner became available only after the 2015 CFL Draft after obtaining national status late.

In the supplemental draft, every team is allowed a shot at each player involved. Teams bid on one player at a time, and the team willing to bid the highest original draft pick of the following year is awarded the player.

The last team to forfeit a first round pick in supplemental draft was also Winnipeg in 2012 for the rights to receiver Kito Poblah, and before that Hamilton in 2010 for offensive lineman Zac Carlson. 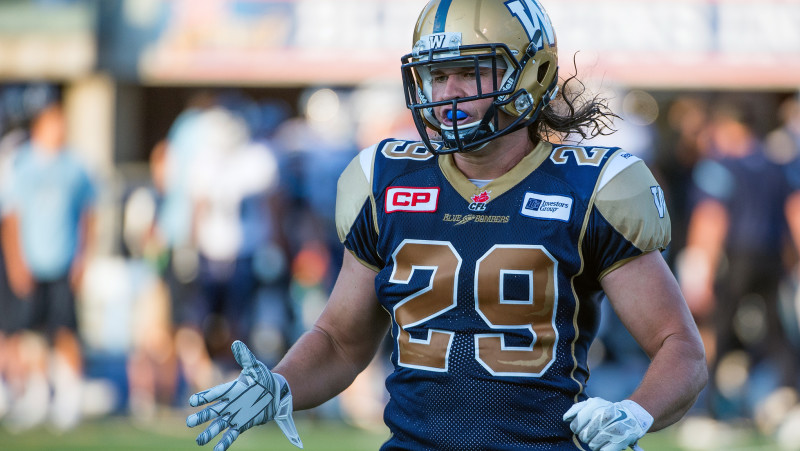 3. Will the Riders trade the first overall pick?

It wouldn’t be the first time. The Ottawa REDBLACKS held onto the first overall pick last year to select Alex Mateas the year after trading it to Calgary for offensive lineman Jon Gott. That year the Stamps selected Laval centre Pierre Lavertu.

There’s been a lot of talk around the league of the Riders trading the pick this year, including some from Chris Jones and John Murphy as the team looks to stock up on Canadian talent in what appears to be a deep draft. Also to consider is the fact that after the first pick of the draft, the Riders aren’t on the clock again until the seventh pick of round three, 24th overall.

Josiah St. John — If the 6-foot-6, 300-pound tackle goes first overall he’ll be the first Oklahoma player to do so in CFL Draft history. It was also mark the first time since 1998 that an NCAA player is taken first overall two year in a row after Connecticut’s Alex Mateas went first last year. Since the start of the modern era in 1985, 14 of 31 players (45 per cent) of first overall picks came from NCAA schools.

Laval O-linemen Part II — If all of Jason Lauzon-Seguin, Charles Vaillancourt and Philippe Gagnon go in the first round as projected, Laval would tie the University of Calgary for the record of most players taken in round one in a single draft with three. Calgary achieved the feat in 2013 with Linden Gaydosh (1, HAM), Mike Edem (3, MTL) and Steven Lumbala (5, MTL).

It would also mark the first time in history a school has had multiple players go in the first round of back to back years, potentially bringing Laval’s total to five first round picks between 2015 and 2016. In all, Laval ranks second since 2001 with eight first round picks, but Calgary with 11 is reachable.

Offensive Linemen — If an offensive lineman goes first this year as is expected, it would mark the third straight year that has occurred. Only three times in history has that happened including once in the modern era. The last time it happened was 2002 to 2004 (Alexandre Gauthier, Steven Morley and Wayne Smith). Never has an OL been the first overall pick four years in a row. 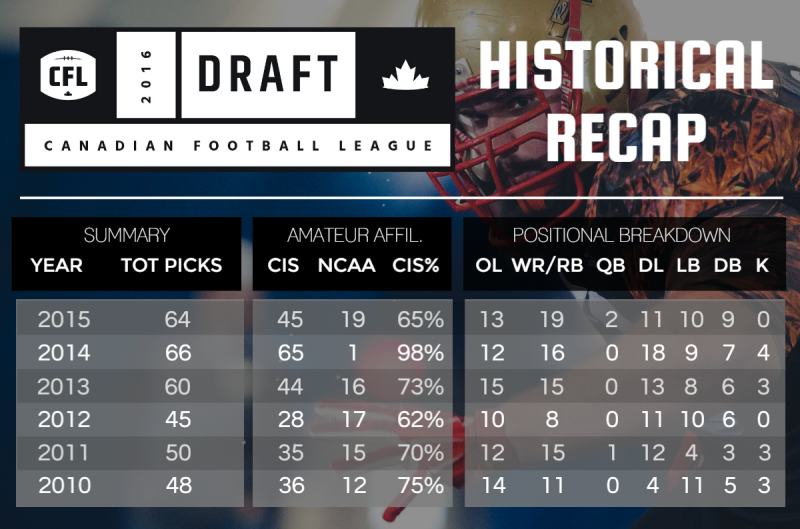 6. Trades that impact the CFL Draft

Winnipeg forfeited its original first round selection after selecting Garrett Waggoner in the 2015 CFL Supplemental Draft.

Edmonton originally acquired Saskatchewan’s second round selection (9th overall) along with receiver Cory
Watson in exchange for the rights to national long-snapper Jorgen Hus and Saskatchewan’s third round pick (26th overall) in the 2016 CFL Draft.

Hamilton originally acquired the Edmonton’s fourth round pick (35th overall) in a trade for Steve Myddleton.

Hamilton originally acquired the Edmonton’s fourth round pick (35th overall) in a trade for Steve Myddleton.

Calgary forfeited its original seventh round selection after selecting Brandon Tett in the 2015 CFL Supplemental Draft.