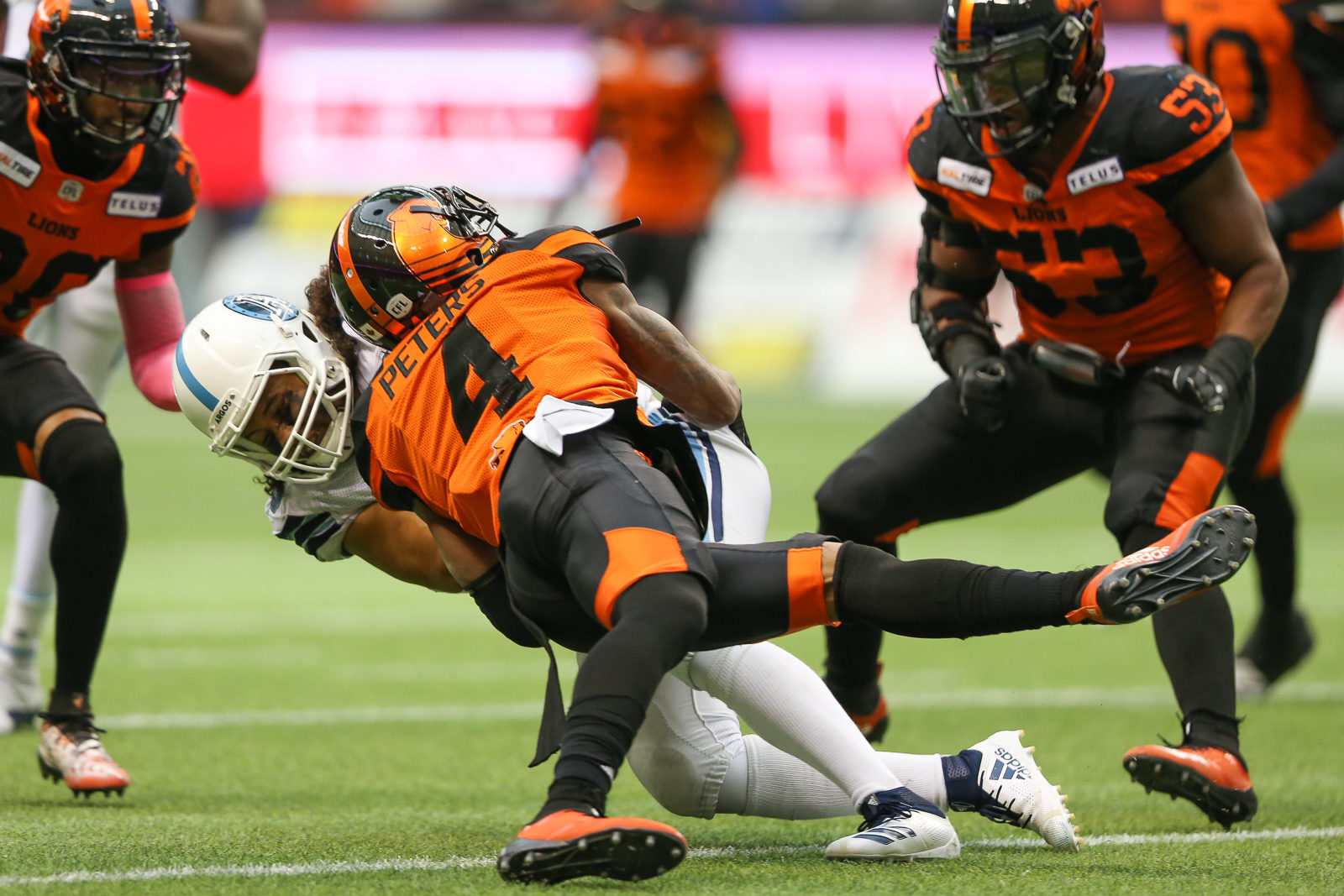 They heard the questions all week. And for the better part of four quarters, the BC Lions defence silenced those critics with a defensive domination. The stout D intercepted quarterback McLeod Bethel-Thompson four times and your Lions (7-7-0) would hang on for a 26-23 victory over a Toronto Argonauts squad that refused to roll over and die.

Two of those takeaways came from defensive lineman Davon Coleman and a first quarter interception from Anthony Orange led to their only offensive touchdown- a Jonathon Jennings dart to Cory Watson- as the home side remained firmly in the middle of this Western Division dogfight. With the loss, the defending Grey Cup champion Argonauts were officially eliminated from playoff contention.

Jennings, who has now been the Leos’ quarterback of record in five of their seven wins, acknowledged that it wasn’t an oil painting, but that they certainly did enough to earn another victory.

“We just wanted to win, it didn’t matter how. Obviously, we’d like to clean some things up, but that’s the nature of the game,” said the quarterback.

“It’s football. They’re competing just like we are and obviously, they made it a little scare at the end, but we did our job to get a win.”

Jennings finished with 199 yards and the lone touchdown strike and was also the beneficiary of a solid ground attack, something they have not been able to say this season. Jeremiah Johnson finished with 118 rushing yards and played a big role in flipping the field position all game.

“Everything came full circle. Our offensive line was blocking their butts off,” said Johnson.

“Rolly (Lumbal) here my fullback, (David) Mackie my fullback, they were blocking their butts off and encouraging the run. That’s all we ask for as an offensive run team. We just want to make sure it stays like this each week.”

Johnson admits he was surprised to hear just how productive he was.

“It was amazing. I talked to Jonathon and asked him how much I finished with and he said ‘I think 118.’ I shook him like a rag doll and said ‘you’re freaking kidding me.’ It just comes back to the hard work we put in during practice when nobody sees us and just maintaining that positive mindset. It happened for us tonight and we’re just going to keep it going.”

Johnson and company led 20-10 at halftime and remained patient through a scoreless first quarter before things got a little interesting before the end. Ty Long’s fifth and sixth field goals put them ahead by 16 with 5:33 to go.

After a James Franklin touchdown pass to Duron Carter made it 26-16, Long missed on his seventh attempt and left the door tad more open for Franklin and the Argonauts to work a miracle. A touchdown strike to Myles White pulled them to within three in the final minute, but that’s as close as the defending Grey Cup champions would get. All in all, it will go down as a nice bounce-back for Orange and the defence. Yet they won’t be totally satisfied just yet.

“Man, we played a hell of a game in the first half. Going into the fourth quarter we’ve got to close the game a bit better than that,” said Orange.

“We gave up too many points, but we got the W. That’s what matters.”

Sometimes you need to be lucky to be good, and vice versa. That was the message Orange conveyed when asked about his big takeaway to get the ball rolling for a solid defensive outing in that first half.

“I’m so proud of Coleman, he does defensive back drills with us every day and always tells us about how he has great hands,” laughed Orange.

“They could have had even more picks. They got their hands on a lot of balls. I’m so proud of that defensive line. They make it easy for us in the secondary when they play like that.”

The win moved BC into a tie with Edmonton for fourth place with the Eskimos paying a visit to Saskatchewan on Thanksgiving Monday. What hasn’t changed is the fact Jennings and company remain firmly in control of their playoff destiny with four weeks remaining.

“Absolutely. One game at a time. We know we have to be better, but we’re excited about the challenge,” added Jennings.

Next up for the Lions is a trip to Calgary and a showdown with the first place Stampeders on Saturday, October 13th. 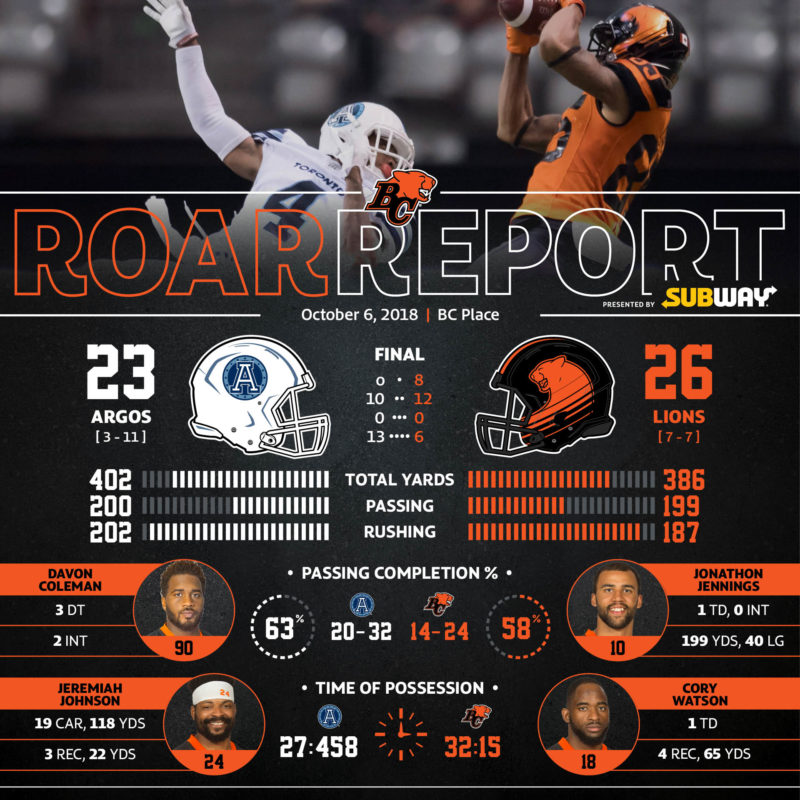 118- rushing yards for Johnson, the first time this season a Lions’ back has eclipsed the century mark.

47- rushing yards for Jennings on four carries. It was his second-highest rushing total this season.

4- interceptions for an opportunistic Lions defence after they forced no turnovers in the loss at Hamilton.

12- the total points off turnovers for the Lions.

33– the number of consecutive home field goal attempts for Long before his fourth quarter miss. That streak dated back to last season.

2-  point differential in the season series between these teams. The Argos prevailed 24-23 at BMO Field on August 18th.

Wally Buono met with the media post-game and spoke on the following points:

His takeaways from another close win at home: “Like I always say, there is no easy game in professional football. We didn’t make it easy.  But we won, right? The thing that was encouraging is our defence got turnovers, our special teams again were very good, our return game seemed to come to life a little bit and offensively (we) did enough good things. It was nice to see us run the ball with some authority, right?”

On Coleman’s two interceptions and the fact his defence came to play: “The thing about that is we preach to them about getting their hands up and good things happen when you listen, right? The big thing we’re preaching, and we have been preaching, since training camp is turnovers: affecting the ball, affecting the security of the ball and our coaches have gotten to the point now where they give them a certain percentage that they should affect the balls in practice, they keep tabs and the more you emphasize these things, the more the players buy into it and tonight was a good example.”

Johnson, Coleman and Long were all deserving of their game balls in this one, but let’s take a moment to acknowledge the job Long has done in his two seasons in the den. This is a guy who was just viewed as a training camp “body” when he first reported to Kamloops in 2017. After all, the club had made Swayze Waters one of its top priorities in free agency. After an injury to Waters, Long took an opportunity and ran with it. Buono said after tonight’s win that he would be hard-pressed to think Long isn’t the league’s best all-around kicker.

The offensive line performance is extra impressive when you consider how banged up they are. Hunter Steward braved his wonky ankle while rookie Andrew Peirson did a nice job in his debut at centre. Pass protection and running the ball will be even more crucial as we get deeper into the fall.

We’ve given Orange plenty of the credit for setting up the only Lions touchdown, but what can you say about the amazing Bryan Burnham 43-yard catch three plays before Watson’s score? All while in tight coverage. That’s the Burnham we know.

The Lions will pay a visit to Calgary on Saturday, October 13th for the second of three regular season meetings. It is a 5:00 PM PT kickoff from McMahon Stadium. The 11-2-0 Stampeders are in Montreal on Thanksgiving Monday.