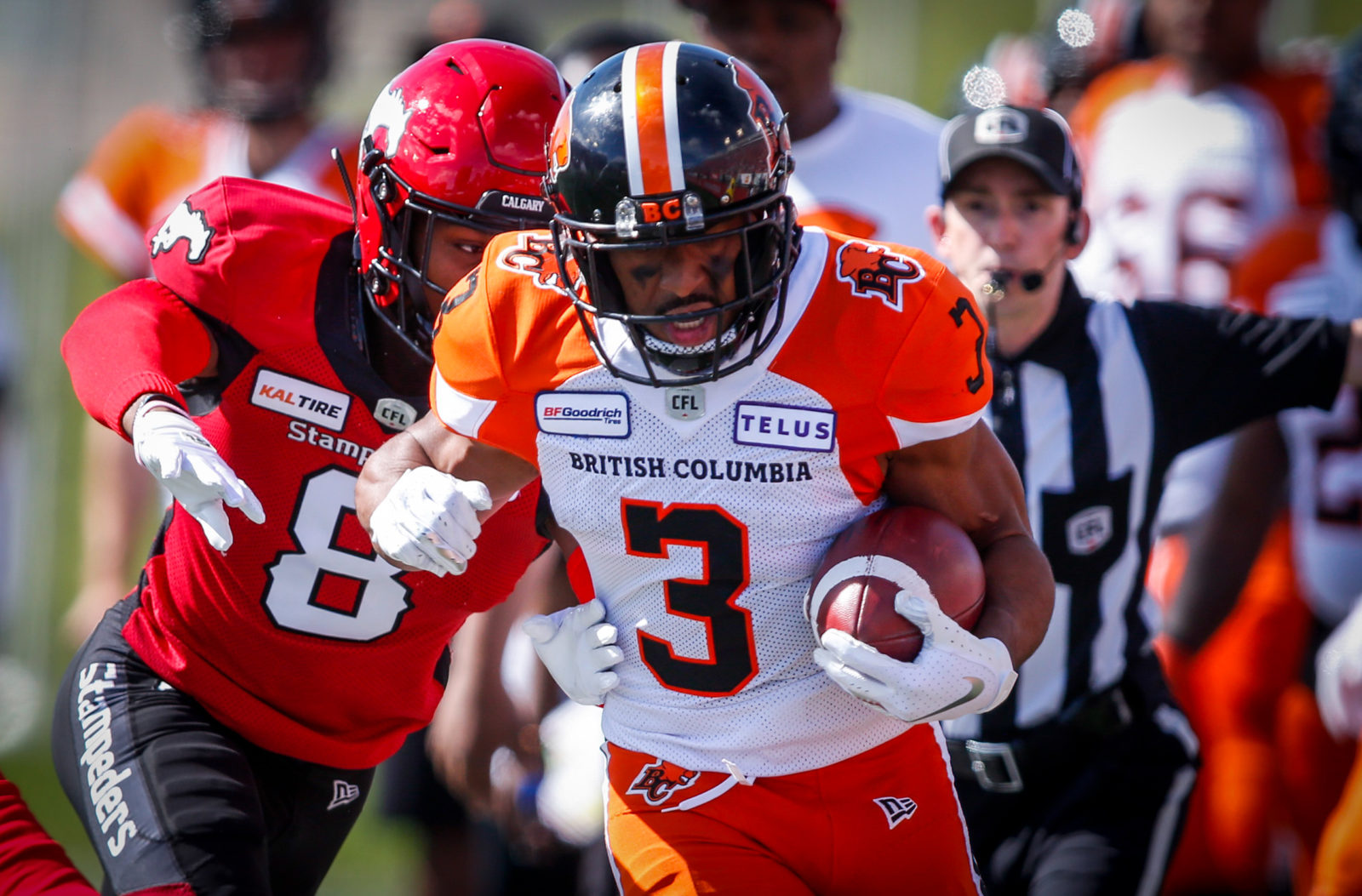 Once again, they came firing out of the gate. And once again, a worthy opponent got themselves up off the mat. Eric Rogers’ third touchdown reception of the night with 31 ticks on the clock was the final dagger in a stunning 36-32 Calgary Stampeders victory over the BC Lions on Saturday night.

The defending Grey Cup champions pulled it out despite trailing by 11 points with 1:32 to play and starting quarterback Bo Levi Mitchell going down with an apparent shoulder injury in the midst of the crazy comeback. Nick Arbuckle engineered their final two scoring drives, the ladder coming after the Stamps executed an onside kick. It was a definite reminder of just how cruel the football world can be at times.

“It was a wild two-and-a-half minutes but welcome to the CFL,” stated head coach DeVone Claybrooks after his eventful return to Cowtown.

“It’s a tough loss but we’ve got to pick our heads up off the mat and be ready to re-load and play. Looking at your season and your matchups, you’ve had arguably your three best teams in your division on the ropes and double-digit leads in at least two of the three. So you’ve got to understand what we do great and what are we doing bad that we need to continue? It’s the consistency. We can’t continuously shoot ourselves in the foot and those plays are the plays that we have to make and it’s playmakers that need to make them.”

The Lions fall to 0-3 despite churning out by far their best offensive performance to date. Mike Reilly finished 36/42 for 354 yards, two touchdown strikes and ran for another to put them ahead 32-21 with 4:10 left on the clock while many of the fans dressed in red headed for the exits.

John White gave them the backfield production they were seeking, finishing with 161 all-purpose yards and two touchdowns for a visiting squad that led by as many as 21 points in the first half. But as we are reminded, no points in the standings are given for early leads.

“The mindset is that we have to improve,” said Reilly after the loss.

“We did some good things offensively but the things that I am focused on and concerned about are what stopped us from winning.”

One of those miscues was a failure to punch it in from the one-yard line on the final play of the first half with Reilly and company leading 22-10.

“If we leave with a touchdown, there’s s good chance the result of the game is different,” added Reilly.

“Coming out of halftime we did nothing for the first two drives of the third quarter as our defence is playing well. We’ve got to be better. We can’t let those opportunities pass us by without taking advantage of it.”

Reilly was once again on point with Lemar Durant who caught his third touchdown reception in as many games. The quarterback also benefited from much better pass protection from a tweaked offensive line that saw Jean-Simon Roy debut at centre with Hunter Steward and David Foucault juggling positions from the first two weeks. Indeed some positives to take into next week’s trip to Toronto yet this one will sting for a day or two.

“The best part about it is the cupboard isn’t bare,” added Claybrooks.

23- the number of Calgary points in that frantic final quarter.

3- the number of successful Stampeders two-point conversions. The last one got them to within three after Arbuckle’s touchdown run. It was caught by, you guessed it: Eric Rogers.

100- completion percentage for Arbuckle (9/9) after being summoned for Mitchell late.

87- yards for White as a receiver out of the backfield. He caught nine passes from Reilly.

37:11- the Lions’ time of possession; a stark reminder of those missed opportunities the QB spoke of.

445- the Lions’ total offence in a losing effort.

The Reilly you saw tonight was the ultimate warrior. He took a couple of hits yet kept fighting. Look no further than his ten-yard TD scamper. He wasn’t going to be denied.

You have to feel good for White. The running game has had its share of criticism and given his recent injury history, that’s what makes his story all that more special. He played a big role in flipping field position in this contest.

The onside kick to help seal it: have to give them credit for the execution.

McMahon Stadium: you’d forgive members of the Lions and several other visiting teams if they were happy to see it demolished one day. Although, any talk of a new stadium for Calgary appears to have gone away for now.

The Lions are back at practice on Tuesday ahead of a road date with the Toronto Argonauts on Saturday, July 7th. It is a 4:00 PM kickoff from BMO Field.