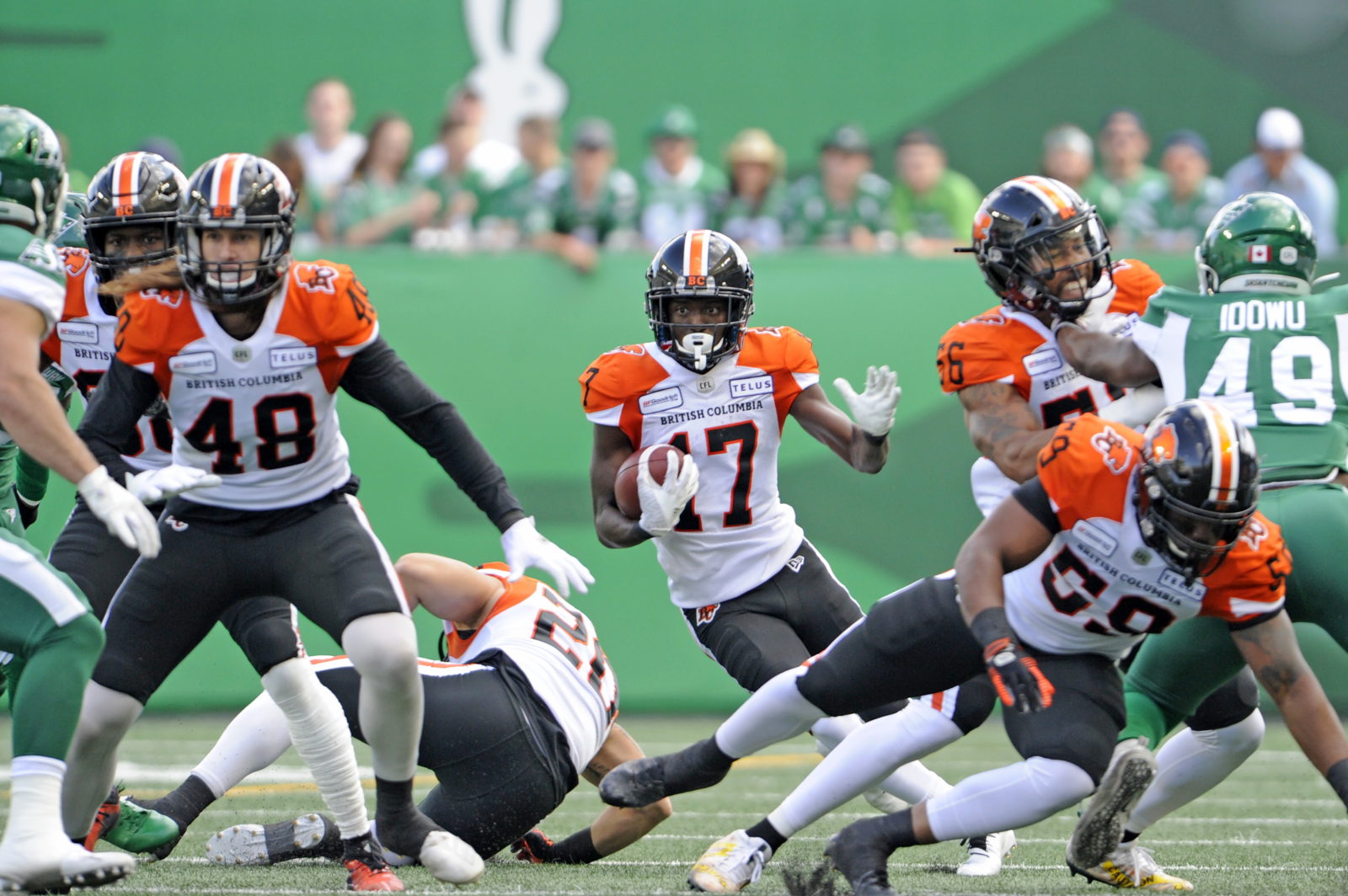 BC Lions defensive back Victor Gamboa finds a seam during first half CFL action against the Saskatchewan Roughriders, at Mosaic Stadium in Regina on Saturday, July 20, 2019. THE CANADIAN PRESS/Mark Taylor

@BakesTakes84
Regina, SK- They traded punches for three quarters in what was shaping up to be a heavyweight bout of the 12-round variety. And then the hometown Saskatchewan Roughriders pulled away.

Cody Fajardo finished with 278 passing yards and a pair of TD strikes to Shaq Evans as the Riders prevailed 38-25 in the first of a home and home series with the B.C. Lions.

Evans’ second major was the exclamation point in a final 16-and-a- half minutes where the home team exploded for 20 unanswered points after Sergio Castillo’s fourth field goal of the night gave the Lions a one-point lead. Reilly found Jevon Cottoy for a touchdown in the final minute but it was too little too late.

Those Castillo field goals will be a major talking point on a night where Mike Reilly and the offence simply couldn’t finish drives. With the loss, Reilly and company fell to 1-5; the franchise’s worst start since the 2011 season.

“Offensively, we moved the ball pretty well the entire game (but) we just didn’t finish in the red zone,” said a frustrated Reilly after the game.

“That’s obviously the difference. Way too many field goals and we’ve gotta be better in the red zone. If we come away with touchdowns I’m not saying it’s a different outcome in the game but it’s certainly a closer score at the end and then you never know what happens. I thought we were efficient on first down, I thought our second down conversions, for the most part, was decent, second and long we struggled again but you know, we’ve got to finish in the red zone.”

The quarterback was bang on when he said they were efficient. With Brandon Rutley used as the primary back, the offence was able to move the ball and pick up huge chunks of yardage before the result turned in favour of the Roughriders. Rutley finished 73 yards on 13 carries before leaving in the fourth quarter with an injury. That balance on offence is definitely a positive they can take into the rematch next week at BC Place.

“We were able to move the ball efficiently and in all phases, ” added head coach DeVone Claybrooks.

“When Mike had time, he was able to find guys and we were able to run the ball. We can’t get behind the sticks. We’ve got to stay ahead on first down. When we get behind the sticks, now they can tee off on the rush and those types of things. We understand there are some positives, very few positives, we can take out of the game, and that was definitely one of them. The offence coming in when the game is pretty much out of hand and engineering a drive. The fight was there for them and they were still fighting.”

Reilly’s one-yard touchdown run with 45 seconds left in the first half made it appear they were heading to the locker room up by six until the roller-coaster first half concluded with Marcus Thigpen returning the ensuing kickoff 100 yards for a touchdown to give the Riders a 17-16 advantage. Momentum swings indeed went a long way in this battle.

“Anytime the other team gets a big play, it’s going to be a big momentum shift for sure,” said Reilly.

“It’s tough before halftime because you don’t really get a full chance to try to get that momentum back because you’re limited in time and things like that but that was certainly one of the plays. There was many throughout the game, again. I choose to focus offensively and the opportunities were in the red zone that we didn’t convert into touchdowns are ones that I think we’ll all look at and wish that we had done better.”

The veteran quarterback is no stranger to adversity, yet wasn’t willing to elaborate on just how frustrating the 1-5 start is to grasp. At this point, all they can do is look forward.

“I think everybody knows what it’s (frustration) at. If people can’t figure it out when we’re 1-5, then I’ll let you guys figure out the frustration.”

6- the number of lead changes in a wild first half, culminating with Thigpen’s big special teams play for Saskatchewan.

87- Rutley’s all-purpose yards when factoring in his two receptions out of the backfield.

20- unanswered points for the Roughriders after the Lions led 19-18 late in the third quarter.

0-3- the Lions’ record at the new Mosaic Stadium since it opened in 2017. The last victory remains the final ever game played at the old one in October of 2016.

Another backbreaker came when Ebo Ogundeko was flagged for roughing the passer before Saskatchewan’s touchdown late in quarter three. Instead of settling for a field goal attempt, the fresh set of downs resulted in a touchdown run for Fajardo and a 25-19 Riders lead after 45 minutes before the floodgates really opened.

Line of scrimmage was key again. Only this time, it was the Lions’ offensive line that had a nice bounce-back game while the defensive front allowed Fajardo too much time to operate for four quarters.

Claybrooks told Reilly he wanted to take him out once the score was out of hand. The quarterback talked him out of it and engineered the late scoring drive. That’s the sign of a great leader and something the entire team can rally behind going forward.

“Mike didn’t want to leave his teammates. You have to respect that,” Claybrooks said.

The Lions and Riders meet once again next Saturday back at BC Place. It is a 4:00 PM PT kickoff.