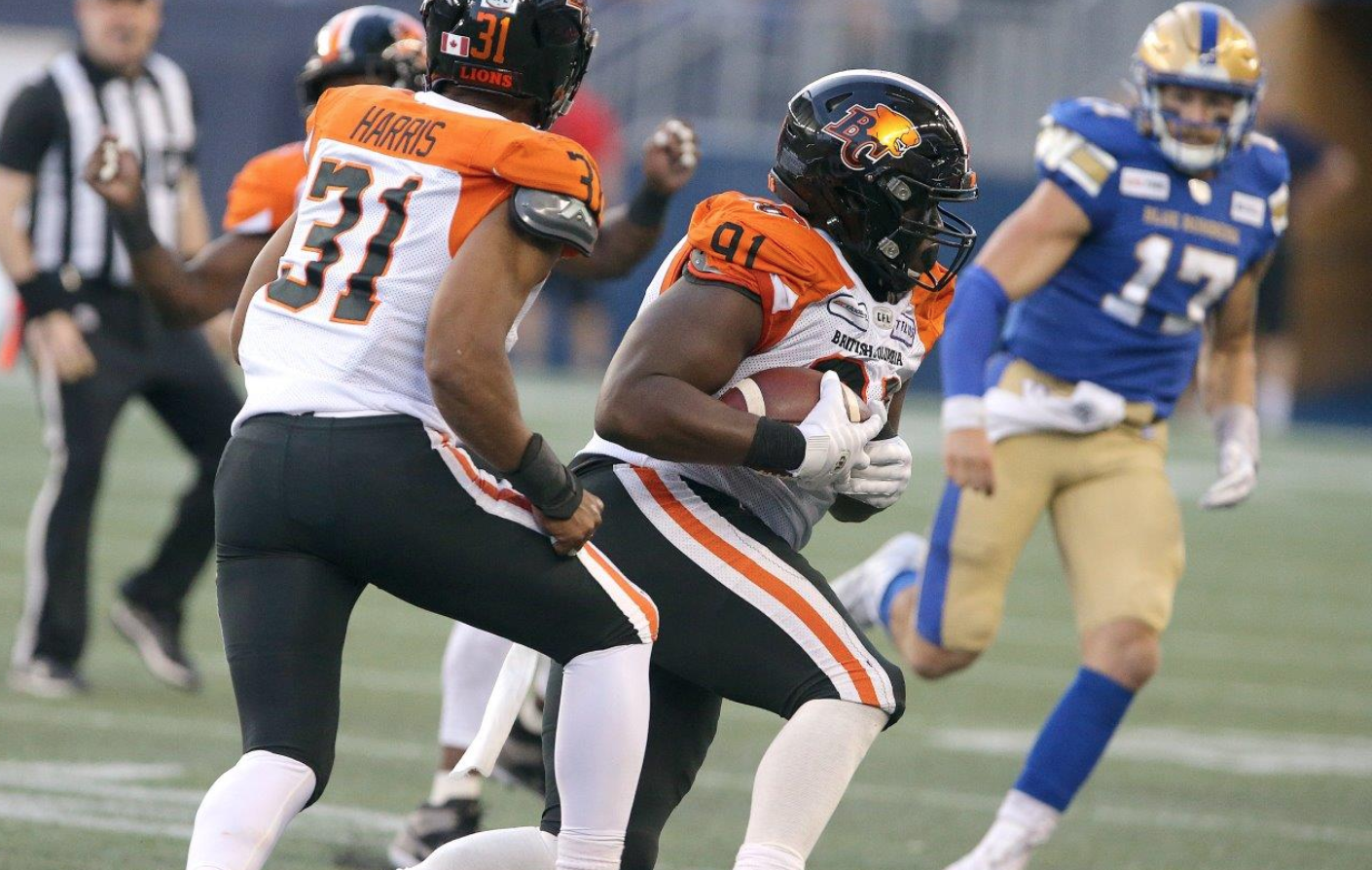 They came roaring out of the gates to start the second half before a couple of key momentum swings ultimately did them in. The end result for your BC Lions was a 32-16 loss to the West Division-leading Winnipeg Blue Bombers and a 1-8-0 record at the halfway point of their season.

Trailing 12-6 at the break, the visitors wasted no time on the opening drive of that eventful third quarter. It began with a 68-yard completion from Duron Carter- after a lateral from Mike Reilly- to Lemar Durant that set them up on Winnipeg’s 12-yard line. Two plays later, John White rumbled four yards for a major to give the Lions their first and only lead of the night.

That’s when, for lack of a better term, all Hell broke loose. Janarion Grant’s 56-yard kickoff return and an interception by Reilly to Willie Jefferson led to ten points for the Blue Bombers and then a blocked punt return touchdown by Marcus Sayles put them ahead by 16 points and it was pretty much curtains.

For the Lions’ quarterback and his entire team, it was a cruel case of déjà vu: a solid effort in spurts, but not good enough in the end.

“I mean, they played better than us. It’s what happens when you lose,” said Reilly.

“This has happened far too much this year. We had moments where we fought, took the lead early in the third, they took it right back and it seemed like from that possession swing they never looked back.”

Reilly finished 16/28 for 177 yards and was sacked seven times as Winnipeg’s defence sent more and more pressure as the game went on. Following the surge at the beginning of that second half, they would only manage a fourth-quarter field goal from Sergio Castillo, a sure cause for frustration after the offence put together one brilliant effort in last week’s narrow loss to Hamilton.

“I didn’t think that we played very consistent tonight. I thought last week was one of our better, if not best, performances offensively. We were just kind of on the same page the majority of the game and tonight it wasn’t the case. We were stringing together a couple of 10, 12 play drives but not finishing with touchdowns and the next time we get out there, it’s a two and out. It was definitely disappointing to come out and had the performance that we had after we were feeling pretty good after last week.”

If there is a silver lining to take from this one, it was a solid effort from the defence. Shawn Lemon recorded two sacks and a forced fumble in his first game back after Monday’s trade, while interceptions by Maleki Harris and Junior Luke led to all six of their points in the opening half and put them in a position to come away with a possible upset. With another tough test against Hamilton looming, head coach DeVone Claybrooks will certainly be intrigued to see that side of the ball build off something.

“You always find the positives and the steps out of it and everything and that’s one of the positives, that we were able to generate some pressure and able to get the quarterback off the spot, but they are still some things we’ve got to clean up defensively,” explained the head coach.

They settled down quite nicely after Matt Nichols and the Bombers’ offence drove 66 yards on nine plays on the game’s opening drive. The only other major they allowed came on Nichols’ one-yard plunge after the key Jefferson takeaway as part of that fateful third quarter. Nichols left the game late with an apparent arm injury and was replaced by Chris Streveler.

“All in all, those guys did a good job of withstanding the blow in the beginning and fighting back to get in the game,” added Claybrooks on his defence.

“That’s the thing that we understand, is we can play with any team in the league. This is another of the upper echelon teams that we’ve clawed our way back and got in the game and once we get there it’s almost like ‘ok, we’re here’ and then they make a play. It goes into those five plays that we talk about. It’s one of those things where we got to learn how to win. You get punched, you’ve got to throw two back.”

The Lions will now head back to Vancouver after seven straight days away from home.

“We haven’t protected our home field yet,” reminded the head coach.

“So this is a sour taste in our mouth and to lose the way we’ve lost these last two games, when you’ve had the lead in the third quarter, it tells you that your team can play with anybody but it tells you that your team is not where you want it to be yet. We understand that and we’ve got to go back to the drawing board. It’s the CFL. Nobody is going to feel sorry for you.”

53- Rushing yards for White after he put up a season-high 124 on the ground last week.

108- Durant’s game-high in receiving yards, more than half coming on the gadget play to begin the third quarter.

7- the number of sacks for an aggressive Blue Bombers defence.

3- the number of Lions sacks after they failed to register any in their previous three contests. Lemon with a pair and one for newcomer Kevin Haynes who was appearing in just his second game this season.

32:19- the time of possession for Reilly and the Lions offence.

Jefferson’s interception could have resulted in limited damage had they not allowed Lucky Whitehead to convert on a 2nd and 19 with Winnipeg on the Lions’ 41. Forcing a field goal in that situation would have certainly been ideal. It’s one of those key four or five plays Claybrooks always speaks about.

Credit to the home side for winning the way they’ve been known to win and that’s by taking advantage of opportunities, whether the big plays on special teams or capitalizing with a short field. As has been the case before, Nichols wasn’t forced to win the game on his own.

Lemon’s addition clearly sparked the entire unit. That will be interesting to monitor going forward, a solid veteran presence doing good for the group.