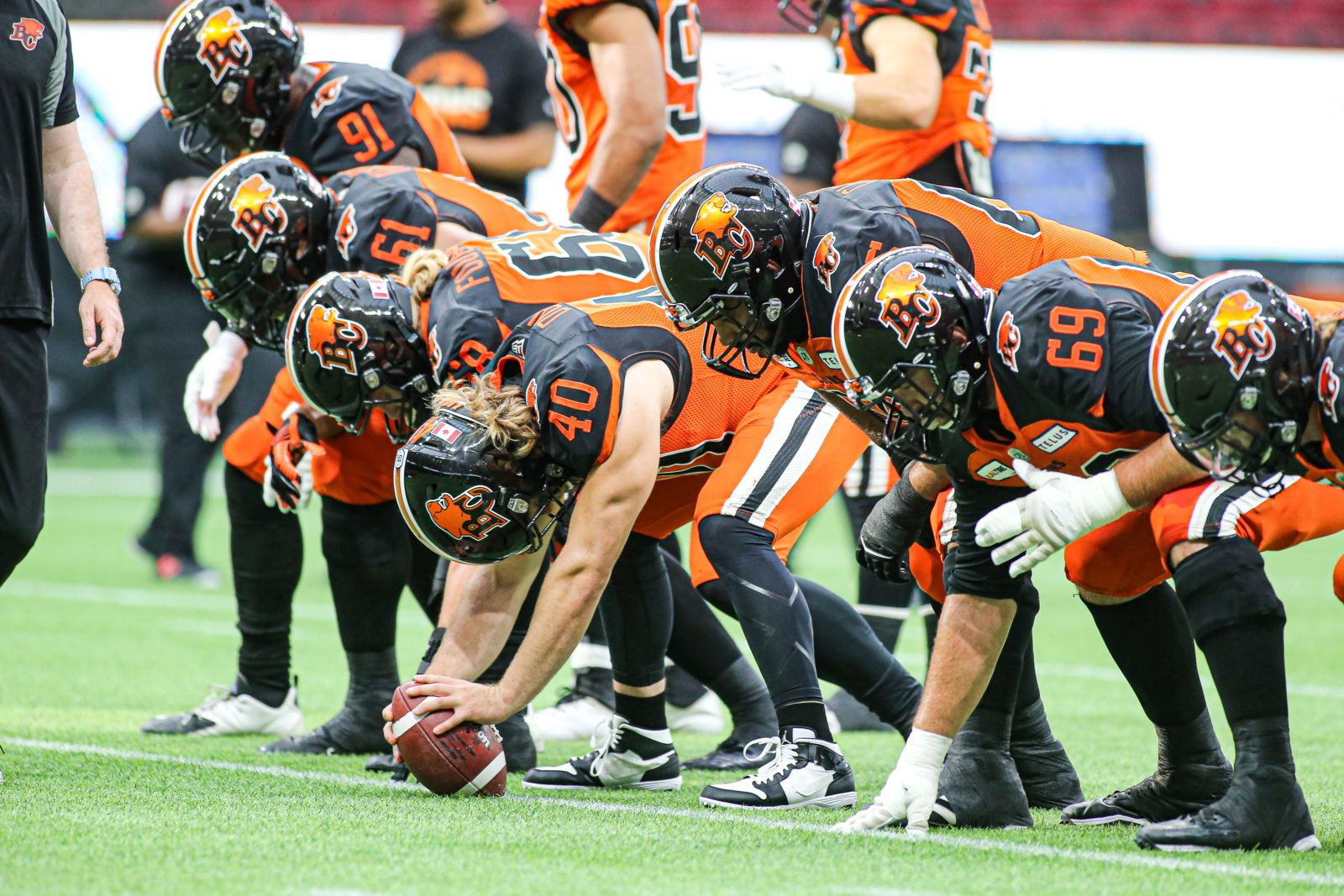 Recent history: these clubs met once previously this season, way back in week three on June 29th. The Stampeders erupted for 23 fourth-quarter points- including 15 in the final 1:25- to stun the Lions 36-32. That loss dropped BC to 0-3 on the season.

Vegas odds: The Stampeders are favoured by 7.5 points with the over/under set at 46.

Yes, playing the role of spoiler is always something a team with nothing to play for in the standings can use to get themselves jacked up. And it’s true, a win by the Lions will drop the defending Grey Cup champions into third place in the West and force them to travel to Winnipeg for the division Semi-Final next Sunday. The chance to move a few pieces around in the Grey Cup puzzle is an intriguing position to be in, yet it’s far from the only motivation head coach DeVone Claybrooks and company will use in their final game action of 2019. Simply put: they want to win it for themselves and try and take that into next May.

“You’ve got to make sure your front porch is clean before you worry about sweeping off somebody else’s,”  Claybrooks told bclions.com earlier this week.

“We’ve got a great group of kids but with anything, you’ve got to decide on what direction and do they fit in our future plans and those types of things? Hopefully, you can get some looks on some guys that haven’t played too much throughout the course of the season but you’re kind of in that limbo. Winning the game is priority number one. If I don’t get to see any of the young guys, I’d rather take the win than anything else. I can always re-assess them at next year’s training camp type thing. You want to go out there, put forth your best effort and put on a good show.”

The last time Calgary finished lower than second in the West? You have to go all the way back to 2011 when they ended up third and lost to Edmonton in the Semi-Final. Since then, the Stampeders have appeared in seven consecutive Western Finals and won five of those contests. 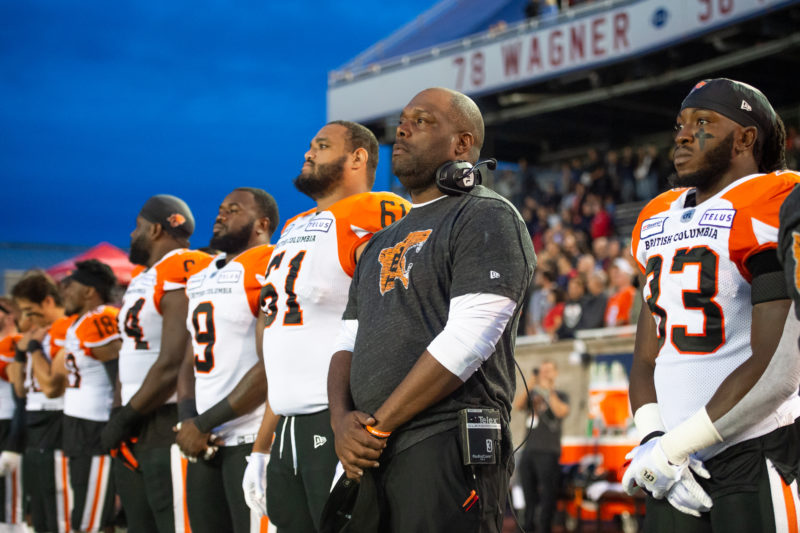 Head coach DeVone Clayrbooks stands with his players prior to a game against the Montreal Alouettes at Percival Molson Stadium on September 6th. Photo: Marc Bourget

They are a victory away from locking up yet another home playoff date and have been the league’s model franchise for much of this decade. Yes, they may have been hot and cold at various points of the season, but this Stampeders squad remains the clear measuring stick for all CFL clubs. That’s what will motivate the Lions’ brass as they look to get this franchise back to contender status starting in 2020. What makes them so good? Quarterback Danny O’Brien points to the complete buy-in from everybody in the organization.

“I think that they’ve been since I’ve been in the league, the best at making you beat them,” said O’Brien.

“They’re very good at sitting back, being patient and teams just beat themselves because they’re that patient. Obviously a lot of vets on both sides of the ball and special teams so they’re going to be lined up properly you have to beat them for 60 minutes which is a challenge for any team they play.”

All you have to do is look back at how it ended in the week three meeting at McMahon Stadium.

“That sums up kind of who they are, “added O’Brien.

“We played really good football for 52 minutes of the 60 and then you give them that sliver, they work their way back in and they’re used to winning. That’s contagious and that’s just part of their culture. We’ve just got to finish if we’re in that same situation this week.”

O’Brien will get his second consecutive start with Brandon Bridge backing him up. It remains to be seen how many, if any, reps the Canadian Bridge will see in relief. 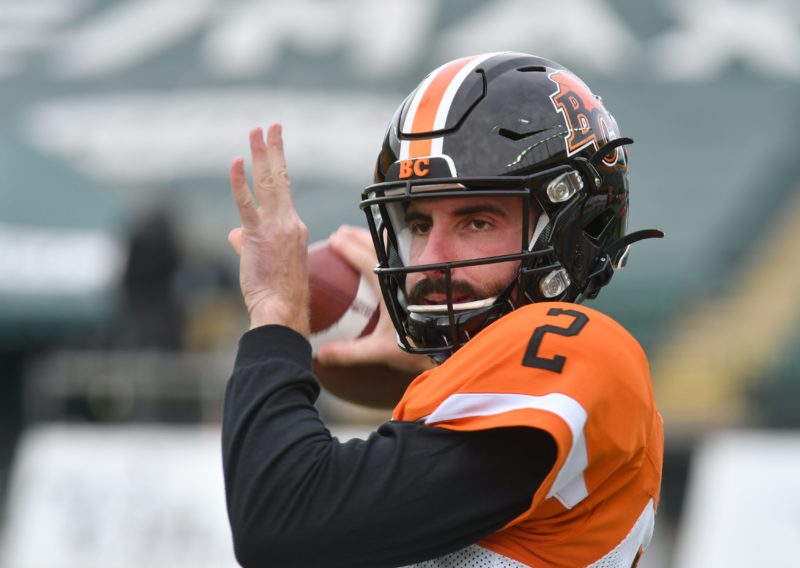 British Columbia Lions player #2 (QB) Danny O’Brien is seen warming up out on the field before the 1st quarter of CFL game action between the Edmonton Eskimo’s and the British Columbia Lions at the Brick Field located at Commonwealth Stadium in Edmonton Saturday, October 12, 2019. (CFL PHOTO – Walter Tychnowicz)

Slowing Down Bo And The Stamps Attack

An endeavour that is always easier said than done. Since returning from his arm injury that kept him on the shelf for seven games, Bo Levi Mitchell and his offensive weapons have done their part in Calgary’s quest to once again reign supreme in the West. His top receiving target is Reggie Begelton who has 1,384 yards and ten touchdowns. They will be without fellow receiver Eric Rogers this week due to injury. It still provides a nice challenge to close out 2019.

“They’re going to give them 50/50 balls and we just have to come down and make plays,” said defensive back TJ Lee.

“I’m riding with my team and I know that we’re going to make the plays. The second half of the season we have played great defensively and we want to continue that.”

As we chronicled earlier this week on bclions.com, Lee always embraces the challenge of facing Mitchell, his former college teammate at Eastern Washington.

“He likes the deep ball more than your average quarterback,” added Lee.

“If you make him throw it short a few times he’s going to get frustrated and force a few deep ones. He’s a great competitor and that’s it.” 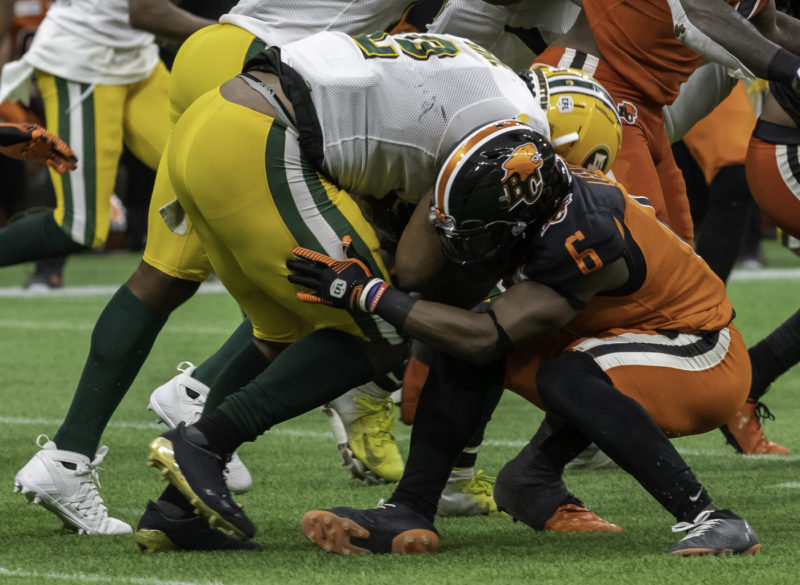 More on those scenarios for the Stampeders: as week 21 begins, it remains possible they can finish 1st, 2nd or 3rd in the West. A lot of that is in the hands of the Saskatchewan Roughriders who host Edmonton at 1:00 PM PT on Saturday. A win or a tie for the Riders would give them 1st place and home field for the Western Final on November 17th. Should they lose, Calgary would then be in a position to finish in top spot with a win over the Lions by virtue of beating Saskatchewan in both regular-season meetings. Wins for both Saskatchewan and Calgary would mean a second place finish for the Stamps and home date with Winnipeg next week.

2011 is also the last time Calgary lost three consecutive road games. They enter this one having lost their last two games away from home: Winnipeg last week and at Montreal on October 5th.

Since Mike Reilly went down for the season early in Edmonton October 12th, the Lions’ offence has registered just one touchdown drive in 26 offensive possessions.

These Lions will be trying to avoid a pretty bad historical mark in this one. Never in the 66-year history of the franchise have they gone completely winless against Western division foes. They are 0-9 in divisional games going into this one.

Running back John White needs just 40 more rushing yards to reach 1,000 for the first time in his career.

Your Bryan Burnham factoid of the week: after not recording a touchdown reception in the first seven games, he has scored ten in the last ten.

The improved Lions’ offensive line gets a couple of tweaks for this one. Second-year National David Knevel starts at left tackle in place of injured Joel Figueroa. 2018 first round pick Peter Godber will dress for the first time since suffering his foot injury on September 29th of last season. Since then, Andrew Peirson, Hunter Steward, Jean-Simon Roy and Phil Norman have taken turns starting at centre It remains to be seen how much action Godber will see behind Norman this week. Ryan Lankford will take the spot of Jevon Cottoy (lower body) at starting slotback.

TSN 1040 has you covered, beginning with the pre-game show at 5:00 PM. Bob Marjanovich and Giulio Caravatta bring you the action at 7:00 PM. Viewers can watch on TSN 1 while Lions fans south of the border can stream it on ESPN+. Fans across the pond in the UK and Ireland can watch on BT Sport. 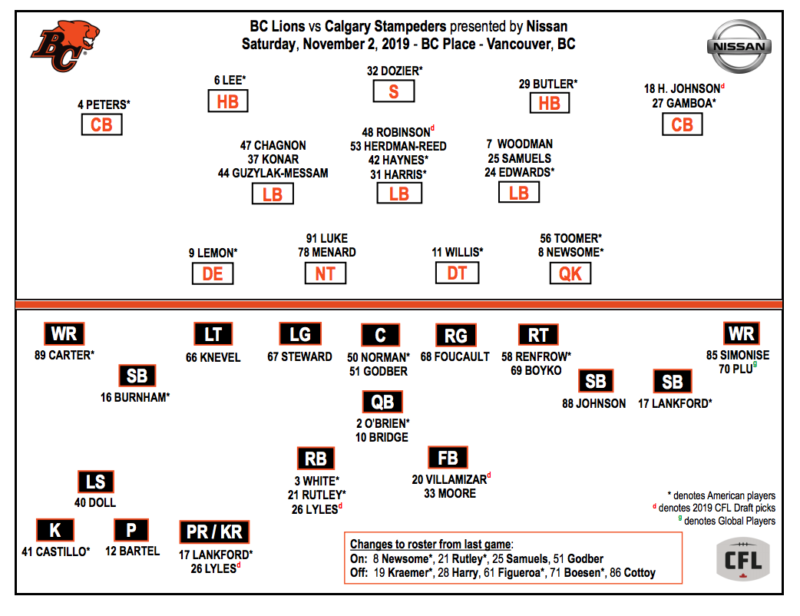