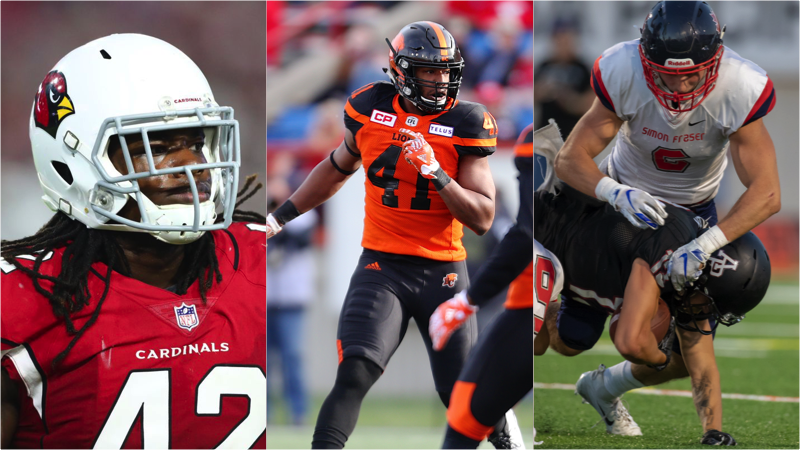 The BC Lions Football Club has added DE Nordly Capi (A), LB Adrian Clarke (N) and DB Ben Minaker (N) to the roster.

Capi- Nordly most recently attended 2018 training camp with the Arizona Cardinals and led the team with four sacks in pre-season play before being waived as part of the final roster cuts. He split 2017 between the New York Giants and Buffalo Bills, appearing in four regular season games for each club and recording a total of seven combined tackles. He was with the Atlanta Falcons for 2016 training camp before finishing the season on Arizona’s practice squad. Nordly originally joined the NFL as a non-drafted free agent with Jacksonville in 2015. After his release from the Jaguars, he finished his first pro season on the Baltimore Ravens practice squad.

Nicknamed “Cap,” the native of Ocoee, Florida played his first two college seasons at Colorado State (2010-11) where he racked up 37 total tackles, ten sacks, seven forced fumbles and a pair of pass deflections in 15 games. He then transferred to Akron for 2013 and 2014.

Clarke- originally drafted by the Lions in round four (32nd overall) of the 2015 CFL Draft out of Bishop’s, the native of Mississauga, Ontario was a standout in his first pro training camp and suited up in 40 games over three seasons. He contributed with 25 special teams tackles to go with one defensive stop. Clarke then appeared in four games with the Saskatchewan Roughriders in 2018.

Minaker (pronounced MINA-KER)- the native of Kelowna and former standout at Mt. Boucherie High School played four seasons (2015-18) at Simon Fraser University. In 139 games, Minaker recorded 194 total tackles, one interception and was a Great Northwest Atlantic Conference (GNAC) All-Academic selection in 2017. He spent the 2019 season on the program’s coaching staff as a defensive assistant.