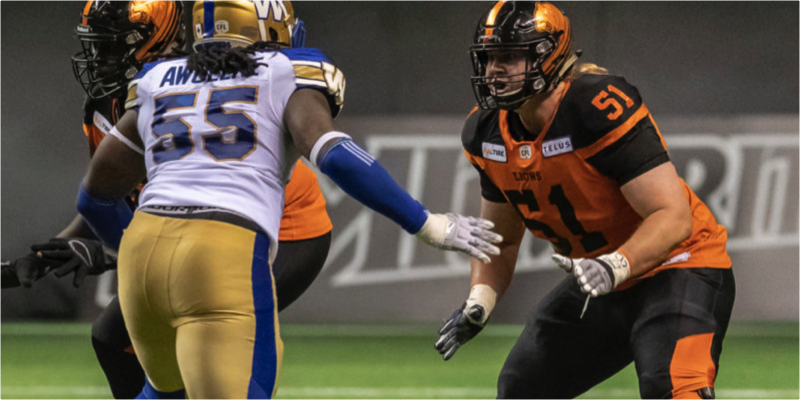 As a young football player growing up in Toronto, Peter Godber always knew how special the Grey Cup was to this country’s sporting history. Appearing on 1st and Now Chat, presented by iA Financial Group, the Lions offensive lineman recounted one of his favourite childhood memories. The 2007 Grey Cup festival was in Toronto and Godber found out that a group of CFL players including Geroy Simon was going to be signing autographs at an event.

“I told one of my friends, ‘man, we’ve got to go to that,'” Godber remembers.

“We hopped on the subway and went downtown. You wait in this line, they give you a football and a t-shirt. Geroy Simon was there in front of me and he got to sign my BC Lions T-Shirt. I still have it at my Dad’s house in Marmora, Ontario which is not too Peterborough.”

The story becomes even more legendary when you flash forward over a decade later when Simon called Godber to inform him the Lions were selecting the Rice University product third overall in the 2018 CFL Draft.

“To have that come full circle is just kind of crazy,” Godber said.

There are many young fans cherishing similar memories to the one Godber has as a young kid. That’s one of the things that has always made this league extra special: the chance for anybody to meet players. It’s one of many reasons some fans have elected to etch their names on the new Grey Cup Fan Base. After seeing pictures of the base, Godber believes it will be a huge hit for fans wanting to attach themselves to the storied trophy.

“Man, what an experience. I know there is a lot of people countrywide that all want to participate in that as well. It sounds like a great experience for them,” the offensive lineman said of the Grey Cup Fan Base.

“I feel like we had a pretty good team this year. Ed Hervey has done a tremendous job. As players, we’re surrounded by great legends in the CFL and we were all very excited to play this season.”

“It definitely does give us an extra little bit of motivation. We all strive to have our name on that Cup one day.”

Up until the season cancellation, Godber was living near the club’s training facility and taking part in regular workouts with a few of his offensive line buddies. He was also taking part in many of the club’s school visits before the pandemic became more serious in March. He credits both his dad and meeting Simon all those years ago for helping him understand the importance of giving back to the community. He got his first taste of CFL player access when he got a ball signed by Argonauts players on the field after a game.

“I went to all the Bills in Toronto games, I went to all the Raptors games, Blue Jays games and I was a big sports fan. I never had this access to the players quite like the CFL and honestly the most affordable ticket and best for my family,” Godber recalls.

“My dad used to love going to Argos games and he always used to tell me, ‘son, these are the guys you want to support. These are the working-class heroes in Canada in the sports leagues. These guys are the ones that are true Canadians, a lot of these guys have offseason jobs and they just love playing football, they love their communities and that’s what they’re here.’ So that kind of inspired me and going back to the schools is really cool to me because I can give the kids what guys like Geroy and some of the Argos players gave me when I was a kid.”

Yet another thing that can motivate him in a quest for the Grey Cup.