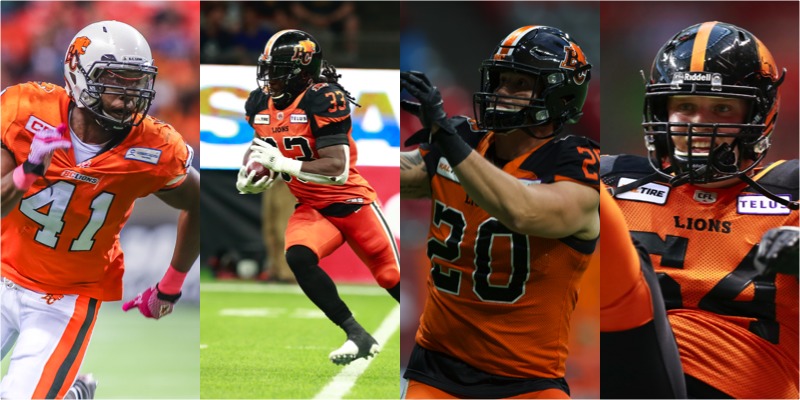 “These are four solid football players that we wanted to get signed early in the offseason,” said Lions co-GM and head coach Rick Campbell.

“Along with ensuring we have depth at a few key positions, this group also gives us a solid mixture of veteran experience and young talent hungry to compete from day one of training camp.”

Clarke- The Toronto native most recently appeared in four games with the Saskatchewan Roughriders in 2018. Drafted in round four (32nd overall) by the Lions in the 2015 CFL Draft, Clarke suited up in 50 games in orange over three seasons and was a force on special teams with 25 tackles. He had previously returned to the Lions as a free agent in January of 2020.

Moore- Since his arrival in 2018, Moore has been a reliable special teams player and contributed out of the backfield with 19 carries for 86 yards. He has also added nine receptions for 91 yards. A second-round draft pick of the Montreal Alouettes in 2017, Moore also spent time on the Ottawa REDBLACKS roster before moving west. Moore rushed for 1,515 yards and 13 touchdowns in four seasons at McMaster University.

Peirson- Will enter his third season in the Den after spending most of 2019 on the practice squad. Known for his countless hours giving back in the local community, Peirson was the Lions’ 2019 nominee for the Tom Pate Memorial Award. The native of Kingston, Ontario originally joined the Lions as a non-drafted free agent prior to 2018 camp and due to injuries, would serve as the starting centre for five regular season contests plus the Eastern Semi-Final in Hamilton.

Villamizar-  The only Lions draft pick from 2019 to appear in all 18 regular season games, Villamizar saw most of his action on special teams before taking over starting fullback duties in September. He recorded two receptions for 13 yards. In four seasons at Wilfrid Laurier, Villamizar caught passes for 191 yards and five touchdowns in 38 games while also playing a big role in pass protection.

The Lions on Tuesday also added RB De’Veon Smith (A) to the roster.

Smith (5’11, 228 lbs)- Spent the first part of 2020 with the XFL’s Tampa Bay Vipers and rushed for 365 yards on 90 carries in six games. Prior to his 2019 stint with the AAF Orlando Apollos, Smith had NFL practice squad stints with Miami and Washington. In 41 games four years at Michigan, Smith had 2,486 scrimmage yards and 23 touchdowns. His 107 yards led all rushers in the Wolverines’ 41-7 Citrus Bowl win over Florida to cap off the 2015 campaign.