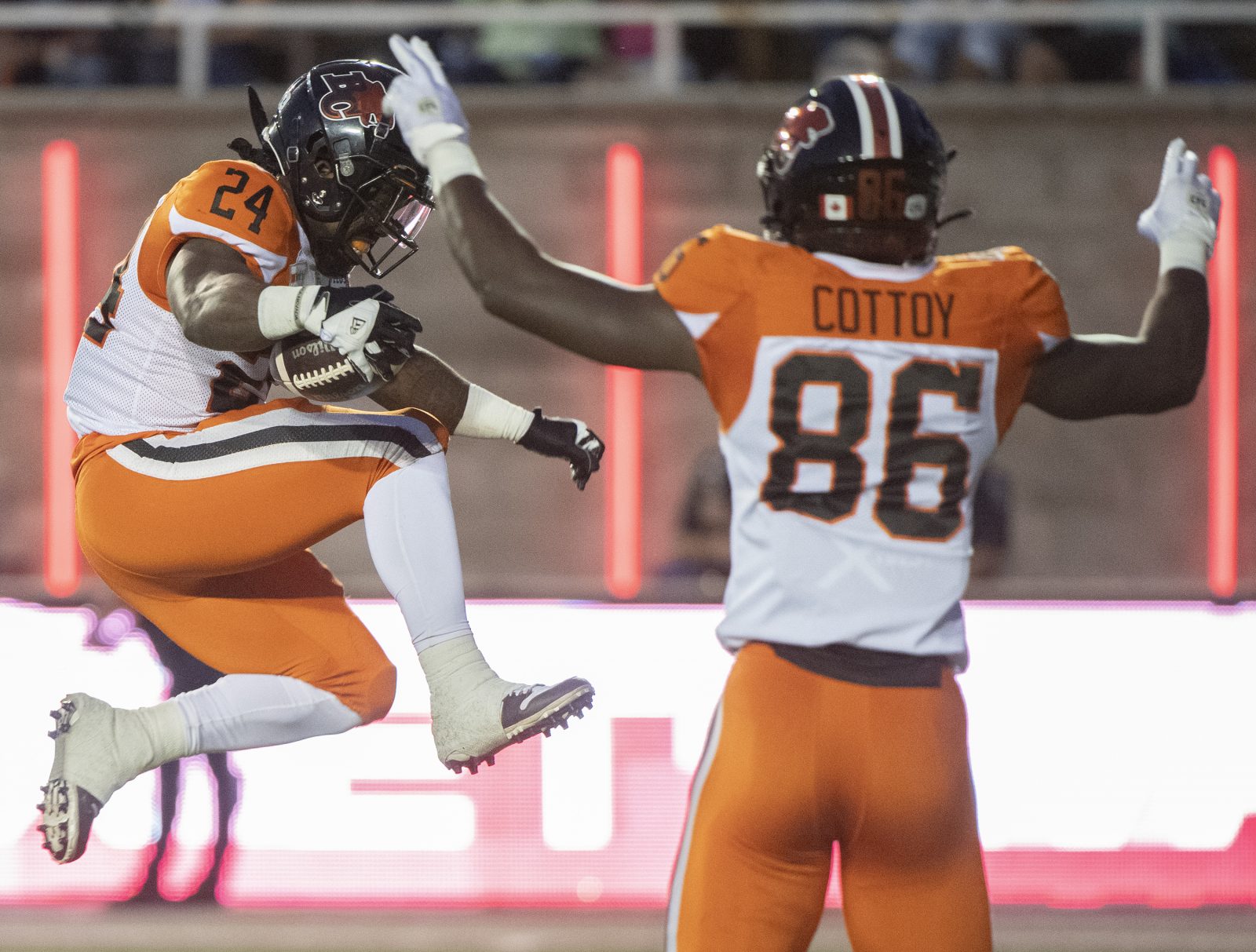 B.C. Lions James Butler (24) runs in for a touchdown during first half CFL football action against the Montreal Alouettes in Montreal, Saturday, September 18, 2021. THE CANADIAN PRESS/Graham Hughes

(Montreal)- An electrifying start that featured some timely plays from a ‘bend but don’t break’ defensive effort all added up to a 27-18 victory over the Alouettes at Montreal’s Percival Molson Stadium. The 4-2 Lions keep pace with Saskatchewan in the ultra-competitive West Division. Now for some game takes from Matt Baker following 27-18 in Montreal on Saturday night.

Michael Reilly and the offence didn’t miss a beat after last week’s beat down against Ottawa. After receiving the opening kickoff, they marched down the field on a nine-play, 77-yard drive that ate 5:30 of time off the game clock. The opening series also featured two third and one conversion, including Nathan Rourke’s 17-yard bootleg to set them up on the two-yard line.

Rourke stayed in on the very next play and pitched one to James Butler for the game’s opening score. As has been his custom, Reilly picked and chose his targets on the series with big completions to Shaq Johnson and Lucky Whitehead to chew up some initial yards. Clinical. That’s the only way to describe this start.

Reilly finished 21/25 for 308 yards and two touchdown passes. More on those later…

It was another night where they gave up some big plays and at times struggled against a mobile quarterback. But at the end of the day, credit goes to the secondary for making timely plays and stifling more than one Montreal drive. For the third time this season, this Lions’ defence didn’t surrender a single touchdown. Six field goals by David Cote was all the home side could muster in this one.

The tone was set on the Alouettes’ opening series when they drove the length of the field only to have TJ Lee intercept a Vernon Adams pass in the end zone. Lee just flat out stepped in front of BJ Cunningham and took it. To say the group was jacked up would be an understatement.

The second interception of the night was just as timely. Bo Lokombo got his second in as many games to prevent Montreal from taking their first lead late in the third quarter when the Lions were clinging to a 17-15 lead. Credit also goes to Jalon Edwards-Cooper for a big end zone knockdown in that same third quarter. That one had Rick Campbell fired up on the sidelines.

Whitehead’s big-game capability was once again on display with a 75-yard touchdown grab from Reilly to put the team up 14-3 in the second quarter. It was remarkable to watch him pick up speed and gain separation on Montreal’s secondary. This guy is quickly becoming a fan favourite and big plays like this one in Montreal will no doubt add to that.

Reilly’s second touchdown pass of the night went to Keon Hatcher to help put it out of reach late.

1,601- Reilly’s passing yards in 2021. He remains second in the CFL behind Zach Collaros (1,731) after the Blue Bombers took down Edmonton later on Saturday.

11-3- Reilly’s career record against the Alouettes.

554- Whitehead’s receiving yards this season to lead all CFL receivers.

13 – Number of pass knockdowns vs the Als, tying a CFL record.

4– the total number of Lions forced turnovers; the two interceptions and two fumble recoveries. The Lions have nine total interceptions this season and remain the only team to record at least one in every game.

“They’re a hard offence to hold back because they’ve got a lot of really good players. Out guys sure stepped up and made plays that were needed, especially late in the game to get it done for us.”- Rick Campbell on his defence.

“Thankfully, we were to make them. Unfortunately, we needed to make them because the regular plays, we weren’t making. That’s kind of the bittersweet part about this win. Coming back east on a long trip and getting a win in this place was awesome but kind of revealed to us how much further we have to go. It felt like we really left a lot out there.

Part of that is them taking it away, right? They did a really good job defensively. We had a number of drives end prematurely because we couldn’t execute whether it was second and short or earlier in the drive we took a penalty and it was second and forever. Good to get the win but there’s also room for improvement, which is great because we just beat a really good team but we can be even better.”- Michael Reilly.

The Lions are back home at BC Place next Friday, September 24th for a big western clash with the 4-2 Saskatchewan Roughriders in a battle for second in the West Division. The Riders will be coming off an impressive 30-16 win over the Toronto Argonauts.