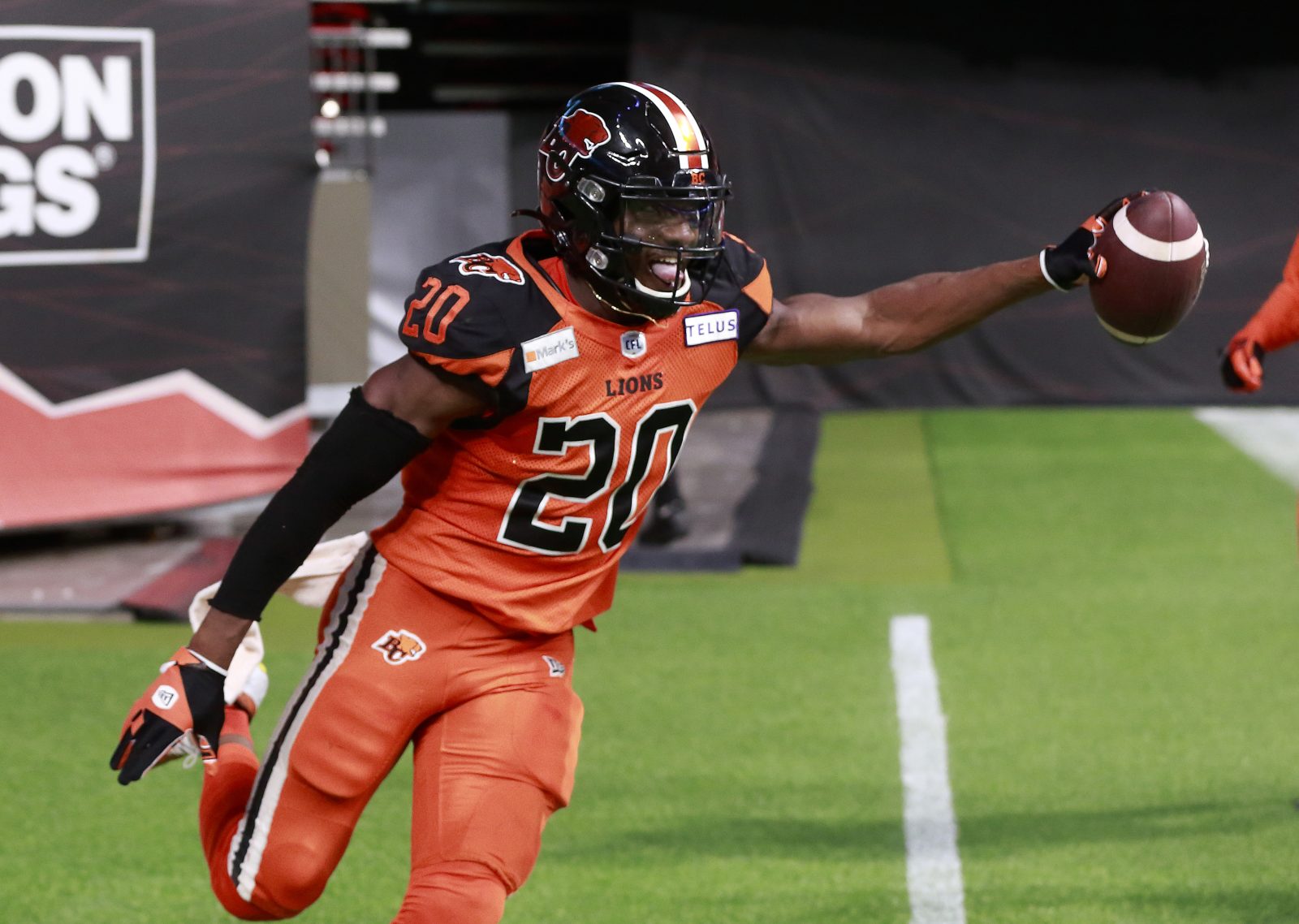 We can all agree that Bo Lokombo plays with a purpose on the field. One of his biggest motivations is playing for his kids and family. Fatherhood has given him a whole new perspective to draw on.

As the Lions prepare to host the Calgary Stampeders this Saturday, the club will also dedicate the game to encourage families to come down to BC Place to celebrate Family Night. With 2021 winding down, the club wishes all families to create new family memories with the Lions making a run towards the playoffs.

Lokombo enjoyed a wholesome moment with his sons, Maleek, who turns two in November and Makai, who was born this August. They came to watch Lokombo play at BC Place for the very first time on September 11th, against the Ottawa REDBLACKS. And when Lokombo scored off a pick six, Maleek got to keep the ball.

With his kids and partner, Terin in the stands cheering him on, it meant the world to Lokombo.

“We picked his [Maleek] outfit. We picked out his jersey that we ordered online. It was a big moment for me because I wanted him to come to a game and be able to experience coming to a football game,” Lokombo recalled.

“I’ve been trying to get him into basketball right now, just sports in general. He’s almost two-years-old, it’s a pretty good time for him to get acclimated to sports. I don’t know if he’ll remember but it’s good to start those habits of coming in every weekend to watch his father play. Maybe one day, he’ll become a football player, too.” 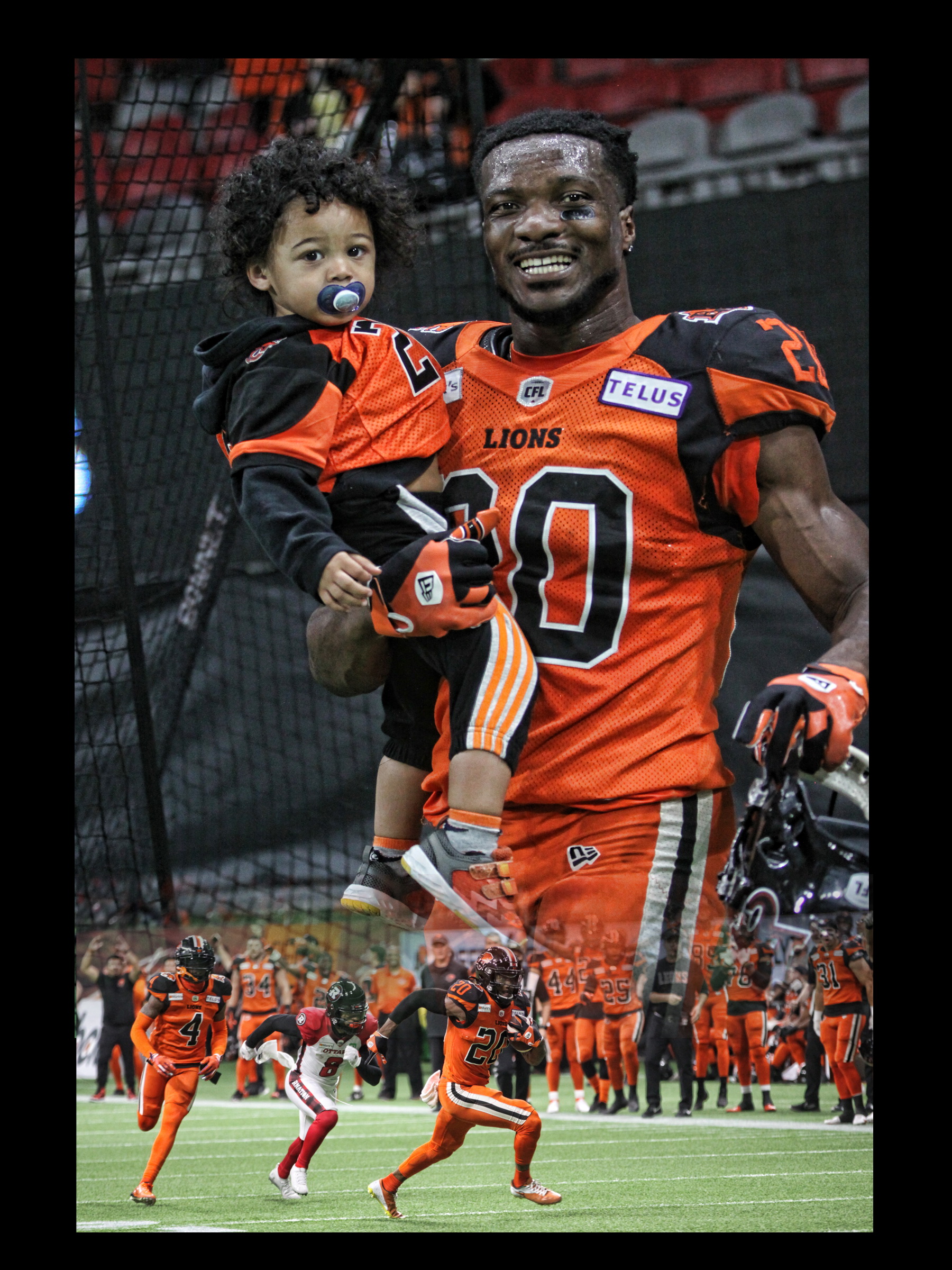 Lokombo said although it took Maleek some time to find number 20 in orange and black, his face lit up once he realized his dad was underneath the helmet and pads.

“I think he was a little shy at first, but he was really into it. We usually bring like iPad for my kids in case it gets a little too crazy, but he was watching the game the whole time, he was focused, he was clapping. He had a good time,” Lokombo added.

A lot has changed for Bo since entering fatherhood. One of the biggest differences is being selfless as he now has two little ones who depend on him. Before fatherhood, he went with the flow on his own time. Now the priorities are his family.

“No kids, no partner, I would say my priorities were all over the place. I didn’t really have a set schedule. When you become a father, you have more responsibilities. You have to plan things ahead, keep things in order. You have to make sure everybody else is taking care of, you have to be selfless,” he said.

“It’s a beautiful feeling and it’s something that I am really grateful for.”

The Lions’ priority after a well-rested bye week will be squaring off against a rejuvenated Stampeders team, who came off back-to-back wins against the Saskatchewan Roughriders.

Although the Lions’ defence came away with four interceptions during the last meeting against Calgary, the Stampeders’ gritty performances in the last two weeks proved they’re a different team. While the Lions will try to defend home turf as the second half of the season begins to wind down, every game becomes more crucial for the hopes of punching playoff tickets. 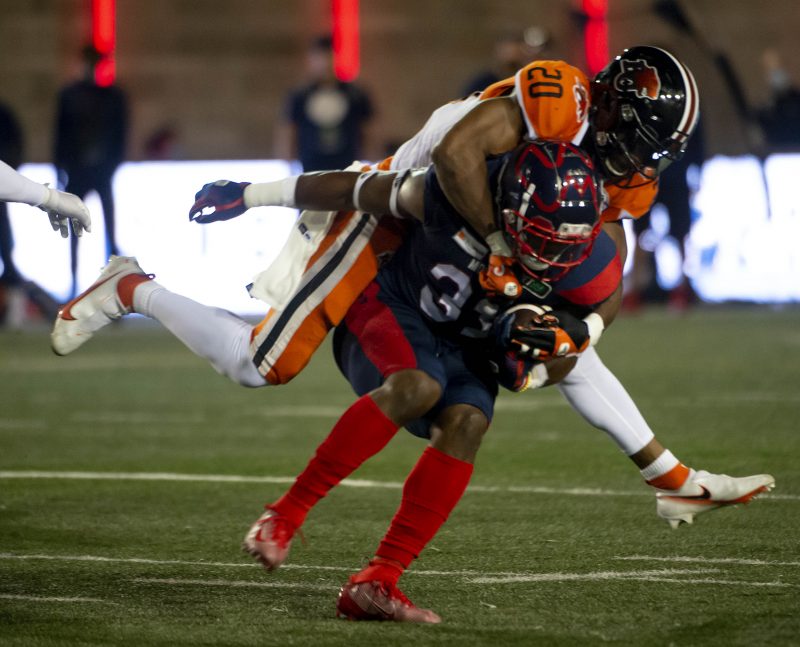 Lokombo said the bye week came at the right time. A couple of injuries were holding the team back from their fullest potential.

“These next six games are super important. They’re going to define us and if we’re going to make the playoffs and how far we are going to go. We have two tough opponents coming up. We have a couple of away games on the East (Toronto Oct. 30 and Hamilton Nov. 5), that are never easy to play. We have a solid roster with some guys banged up. But after this week, guys are rested to take on the remaining schedule,” he added.

With Lucky Whitehead out of the lineup for at least this next game, the club will rely on the likes of Bryan Burnham, Lemar Durant, Shaq Johnson, Keon Hatcher among others. Keep in mind that Burnham is still himself on the field, he has been targeted 50 times for 38 receptions and 566 yards so far this season — he’s still on track to climb the club’s all-time receiving yards ladder.

On the defensive side, Marcus Sayles and KiAnte Hardin missed the Winnipeg game on Oct 1st due to injuries. They should be on track to rejoin the team at practice this week. Lokombo and fellow linebacker Jordan Williams have been a dynamic duo so far this season. Through Week 10, Lokombo is tied with several in the league with three interceptions and has racked up 44 tackles so far. Williams is off to a stellar rookie stary with 56 tackles and counting.

The push for playoffs won’t be an easy task, but Lokombo is looking forward to the upcoming challenge.

“The last couple of games, we’ve been beating ourselves because of self-inflicted mistakes. If we can eliminate the big plays and keep everything simple, keep everything in front of us, we’ll be playing like we were in the first half of the season,” he said.