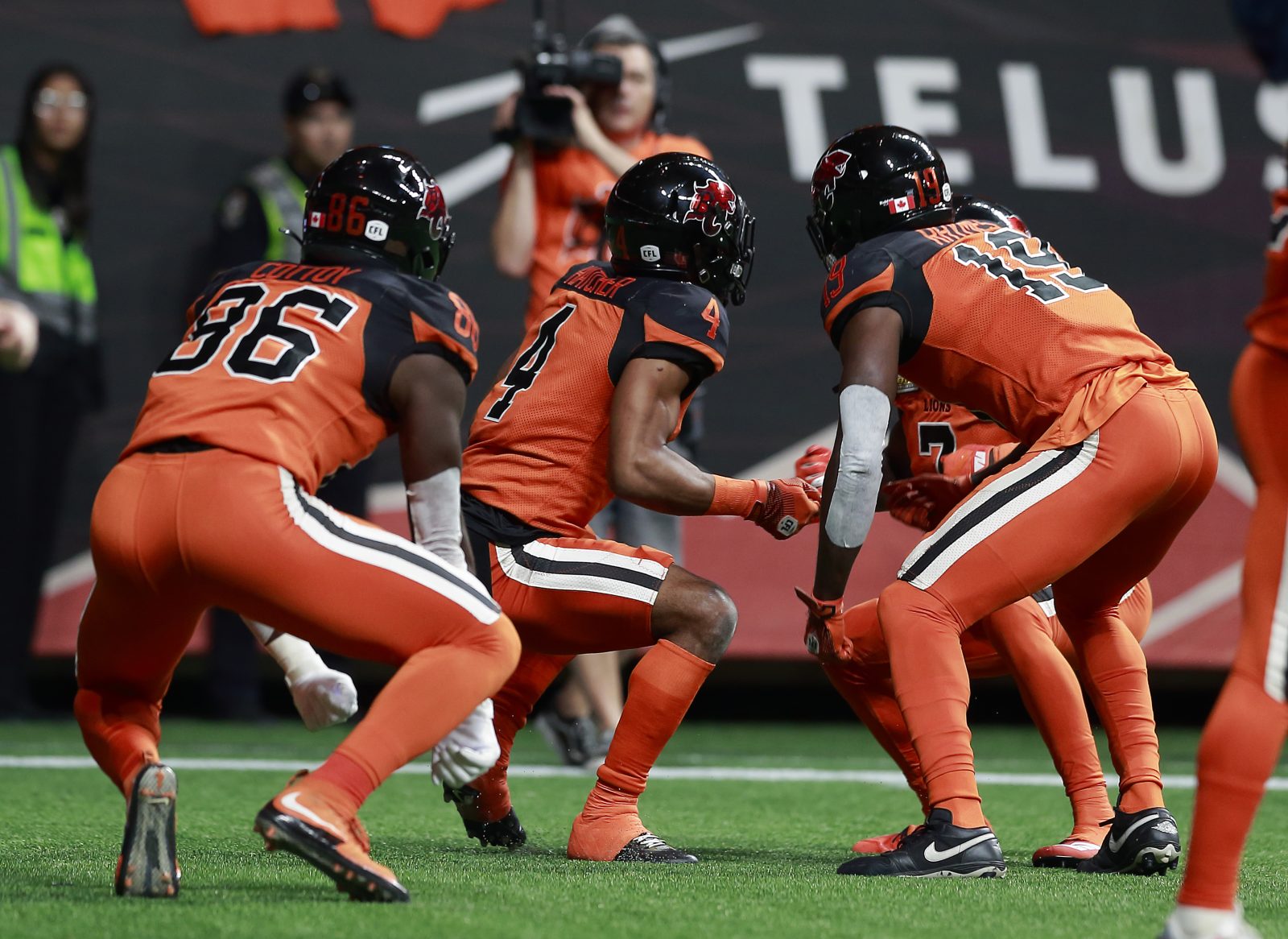 VANCOUVER, BC - SEPTEMBER 30: The Ottawa Redblacks play the BC Lions in their CFL game at BC Place September 30, 2022 in Vancouver, British Columbia, Canada. (Photo by Jeff Vinnick/BC Lions)

The BC Lions have improved to 10-4 and assured themselves of staying on the Western side of the Grey Cup playoffs bracket. This after an impressive 34-19 win over the 3-11-0 Ottawa REDBLACKS on Saturday night at BC Place, a bounce back they were seeking after a lacklustre outing against Calgary last week. Now for some game takes from Matt Baker as the Lions remain in sole possession of second place in the Western Division.

Fast Out Of The Gates

From an offensive standpoint, there was plenty to like from Vernon Adams Jr. and the Lions, particularly in the first half. Adams engineered three touchdown drives in the opening 30 minutes, hitting Keon Hatcher and James Butler for his first two touchdown passes as a Lion while Dominique Rhymes stretched out for a big reception that set them up inside the five before Antonio Pipkin punched one in.

Also impressive was how they handled a 12-second series before halftime. Instead of kneeling it down after a Lewis Ward field goal, Adams aired one out to Hatcher for 39 yards which set up Sean Whyte’s field goal at the final whistle before the break. It gave the Lions a 24-6 lead and they would never look back.

“The guys were locked in this week, pissed off about the loss (to Calgary),” said Adams Jr. following the win.

“Short week, but we knew what we had to do. We knew that was a good defence over there and like I said, we were just clicking pretty much on all cylinders and I don’t like the way I finished but we’ll get better, we’ll watch the film and get better from there.

The second half brought a second field goal from Whyte on the opening drive and another touchdown run from Pipkin to help salt it away. Adams Jr. battled through despite getting sacked six times by an aggressive Ottawa front. He finished his night 17/20 for 205 yards, the two touchdown passes and also added three carries for 38 yards.

“It feels awesome to get a win in front of the home crowd,” added the quarterback. 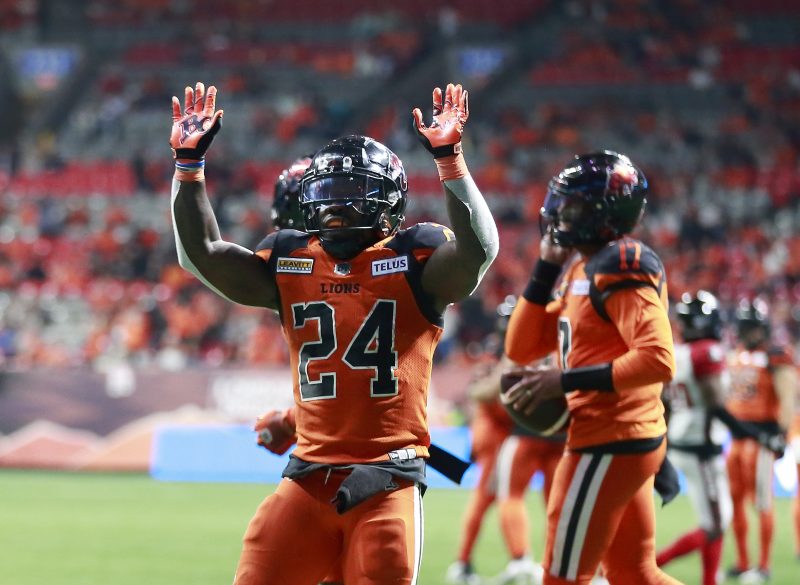 ‘Bend but don’t break’ was the theme for an opportunistic defence in this victory as they forced Lewis Ward to kick four field goals after drives stalled inside the 30. David Menard sacked Nick Arbuckle on two occasions while Garry Peters recorded the only takeaway of the night; a fourth-quarter interception.

There will be some things to go over on film no doubt, but the unit can be proud overall for their performance.

“I thought our defence did a lot of good things,” said head coach Rick Campbell.

“I know there were some plays though that I thought we could get off the field, we’re going to watch this tomorrow, I think it’s good to learn some situational football of what they’re trying to do, what we’re trying to do and you’ve got to play this thing all the way; 60 minutes. They made some good plays but at the same time, I think there were plays that we could have made to get us off the field and not be quite as stressful as it needed to be.

Arbuckle hit Tevaughn Smith for Ottawa’s lone touchdown with 2:05 to play. That close to a touchdown-free game on defence.

Added Menard: “When the team is able to extend drives (on offence) and give us a little break, obviously we go on the field and we run to the ball a little faster, we faster, the DBs cover tighter. Everything is better when the offence is extending drives, right? You saw it tonight. Hopefully, it gets better.” 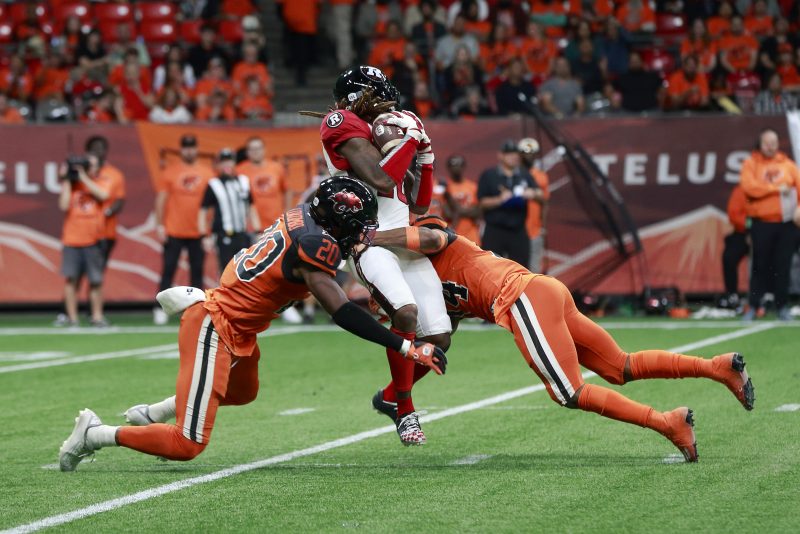 10- the Lions have hit double-digit wins and assured themselves of their first winning season since 2016 when they finished 12-6 and second in the West Division. No doubt a nice feather in their cap but the goals remain much bigger than that.

455-431- the Lions held only a brief edge in total yards as Ottawa was able to move the ball consistently before settling for the four field goals on five scoring drives. Nick Arbuckle was  27/36 for 336 yards, one major and an interception served up to Peters.

1,165- a CFL-best receiving-yards total for Dominique Rhymes after racking up 105 in the win.

119- combined yardage for James Butler: 89 rushing and 30 receiving. His touchdown reception came courtesy of some tough yards after the catch.

The Lions hit the road for a tilt against the Toronto Argonauts next Saturday, October 8 at BMO Field. Kickoff is 1:00 pm Pacific Time. The 8-5-0 Argonauts visit 9-5-0 Calgary on Saturday evening to wrap up week 18.