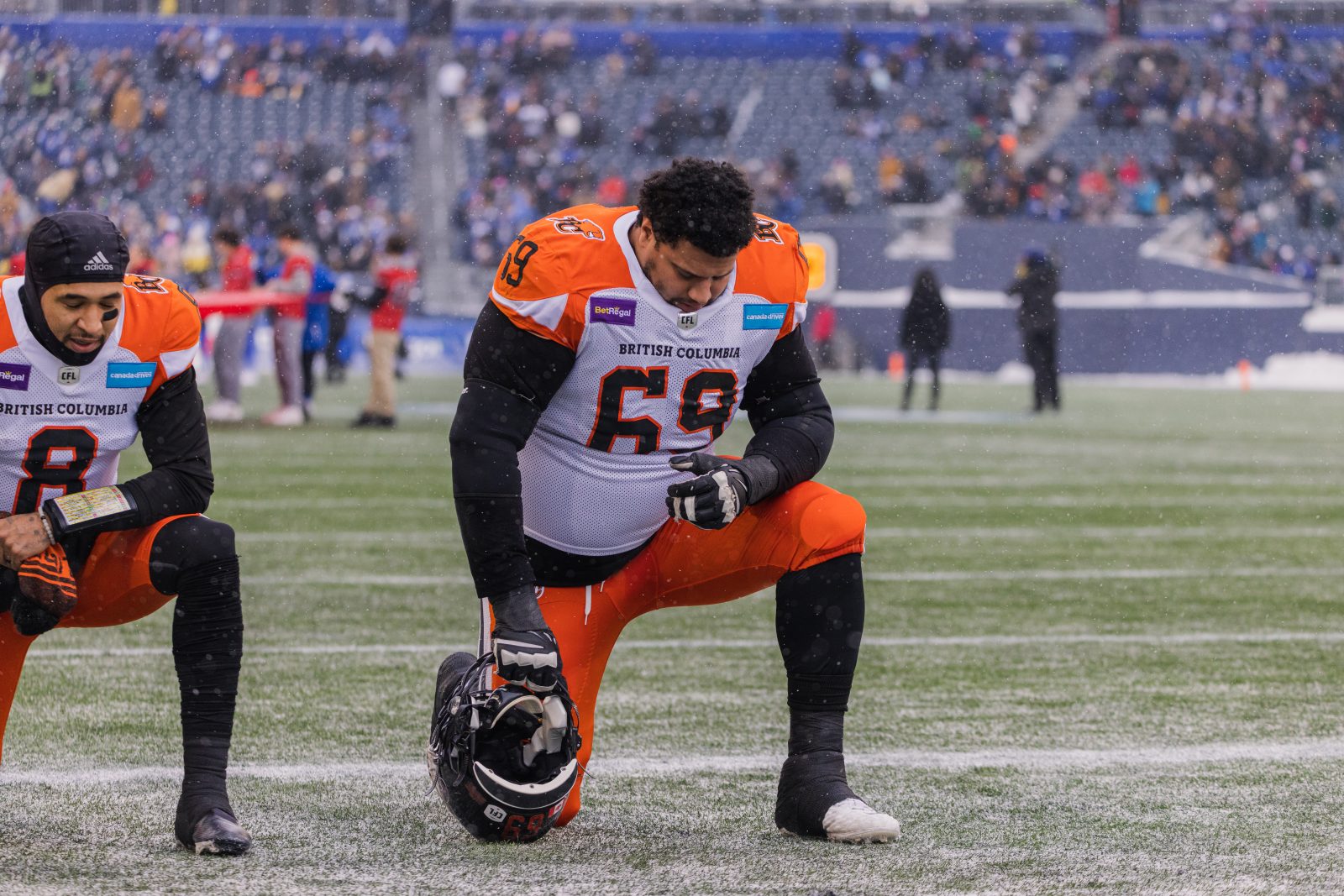 If there’s one thing Jarell Broxton learned from playing college football, it would be to be more open-minded and play multiple positions. The offensive lineman who played two seasons at Baylor University emerged in the second half of the 2022 CFL season as part of an exciting BC Lions team. A little fun fact about Broxton is that the 325-pound offensive lineman had converted from a defensive lineman to the opposite side on the line of scrimmage.

Before the beginning of his second year at Lackawanna College in Pennsylvania, his coach from junior college sat him down and informed Broxton that he was going to play offensive line going forward.

As a promising defensive player at the time and prior, all Broxton could think about was making tackles and forcing fumbles. Although he left his coach’s office very confused that day, little did he know that decision would pay off in the long run.

“I’ve never played offensive line. I didn’t even know if I’m going to be good. So come springtime, it was a transition but it was pretty good. I was going in as a starter then I ended up getting hurt before week one,” Broxton recalled.

“But coming back, my mind was at a better place knowing I’m about to try to get recruited. Surely enough, I started getting a lot of offers and a lot of looks. I think before the season, I ended up committing to Baylor after I visited them. My top two schools were either Baylor or Wisconsin.”

Broxton excelled at playing as an offensive lineman and was named the most valuable player for Lackawanna College in the 2013 season.

While reflecting on those three years at junior college, Broxton said he had to grow up quickly because students have to provide everything on their own from living situations to filling up their own fridges.

“It humbles you in a lot of ways. The grind at junior college is very different. You had to do a lot of growing up on your own. When I went to Baylor, everything was at ease, it was just being responsible. All I had to worry about was school and just play,” Broxton recalled. 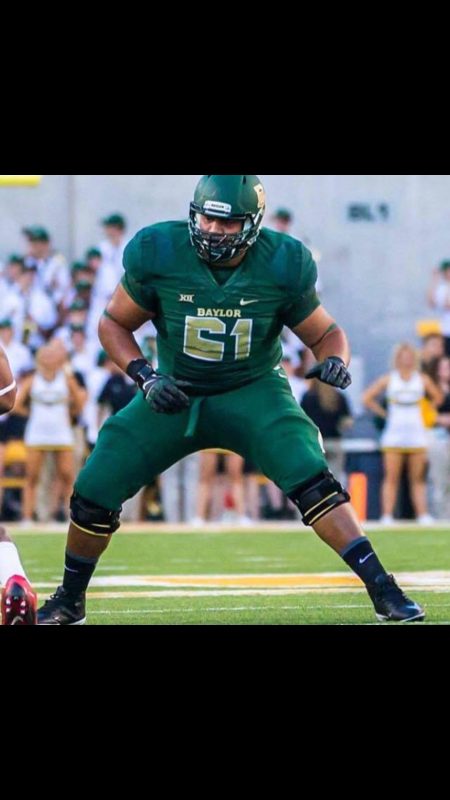 During Broxton’s first season at Baylor University, the fifth-seeded Bears were only one spot away from the college football playoffs during the 2014-15 season. Either way, the entire week leading up to the Cotton Bowl Classic was an unforgettable experience for him.

“We stayed at a nice hotel. Everything was included. We got bowl gifts and all that stuff. That game was something I’ll never forget,” Broxton said.

The Bears finished 8-1 in the Big 12 Conference in 2014 and were on their way to face Michigan State for a chance to hoist the Cotton Bowl on New Year’s Day of 2015.

During Broxton’s two years at Baylor, he played alongside a few prominent players in both the CFL and NFL today. Like fellow offensive lineman, Kyle Fuller who now plays for the Seattle Seahawks, Pro Bowl cornerback Xavien Howard for the Miami Dolphins and 2022 Grey Cup champion Shawn Oakman of the Toronto Argonauts.

“We started the game hot. We were doing trick plays and threw a touchdown to a 400-pound tight end. We were good. And just a few plays that we’ve had that cost us that game. We lost by one point. Just a few things that put Michigan State in a position to win. But it was a bittersweet experience,” Broxton recalled. 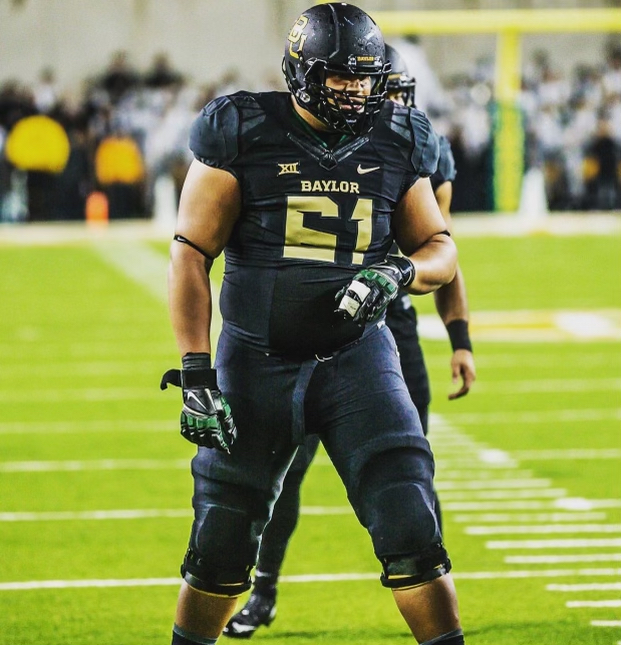 Broxton said he went back to re-watch the game. It was a cringe for him to see a Bowl victory slip by despite helping his college quarterback Bryce Petty to throw for 550 yards.

The Michigan State comeback wasn’t the only storyline of that night. The touchdown to the 400-pound tight end, LaQuan McGowan and Oakman’s iconic coin toss picture still surface on the internet every now and then.

“It was loud. It was kind of a home-field advantage for us because it was an hour away from us. That was a great Bowl game,” Broxton said.

He and the Baylor Bears redeemed themselves the next season when they faced the North Carolina Tarheels in the 2015 Russell Athletic Bowl. Broxton said the Bears had lost two of their starting quarterbacks heading into the bowl game. Despite the challenges of missing key pieces on the offence, Baylor set an all-time bowl rushing record with 645 yards in a 49-38 win over North Carolina.

“Our team just decided that we were going to run our running backs for most of the game. We ran the ball the whole game and we won like that. It was so crazy,” Broxton recalled.

Five Baylor players combined for a total of 645 rushing yards, including running back Johnny Jefferson, who ran for 299 yards and took three to the house.

“The O-Line was very dominant and we won by running wildcat. Just imagined having our quarterbacks because we were ranked number two for two weeks in my senior year,” Broxton added.

While going up against a North Carolina team who faced the Clemson Tigers in the 2015 ACC championship, Broxton and several senior players at Baylor had to finish their college careers in style.

“It was a good North Carolina team. I felt like I needed to end my senior year off with a win because we ended up losing to Texas in the last game of the regular season,” he recalled. 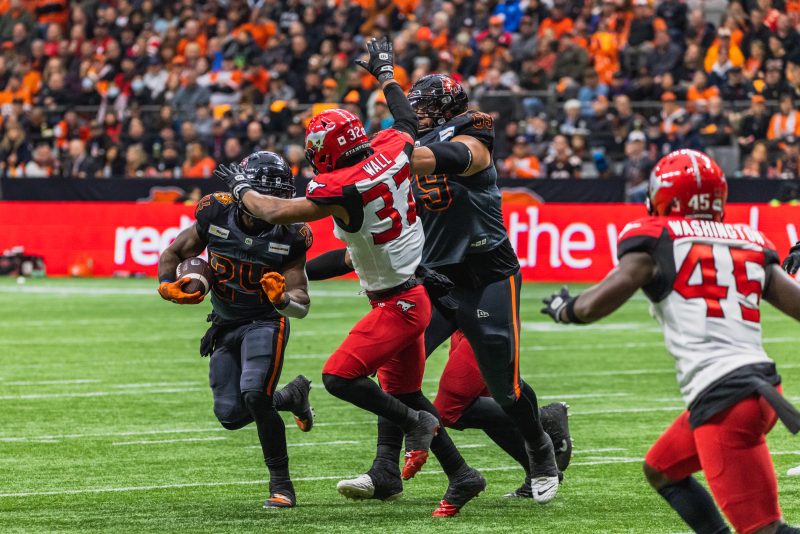 After college, Broxton and his teammates may have gone their separate ways, but college football was some of the best times in their lives. Broxton saw his role grow in the past two seasons playing for the Lions. Now he feels like he can compete with everyone else in the CFL.

And seeing his college teammate Oakman making Toronto his new home in the last two years, Broxton said he was rooting for Oakman to win the Grey Cup after all the adversity he had been through.

“I asked him and he was like, ‘Toronto is love.’ I’m just happy for him that they won the Grey Cup,” Broxton said.

As for Broxton himself, 2022 was a huge confidence boost and he would like the O-Line to be more dominant going forward.

From a defensive-minded player to a converted offensive lineman, Broxton would tell his younger self to be more understanding and willing to learn.

“I felt like if I had a chance, I could also play O-Line in high school. If you have the chance to play both, do it. The more film the better. Also, I would take school more seriously when I was in high school,” Broxton added.

“Junior college was a real grind. It helps you prepare for the real world. If any high schoolers want advice, junior college is a great way to get a second chance if you don’t get recruited in high school.”