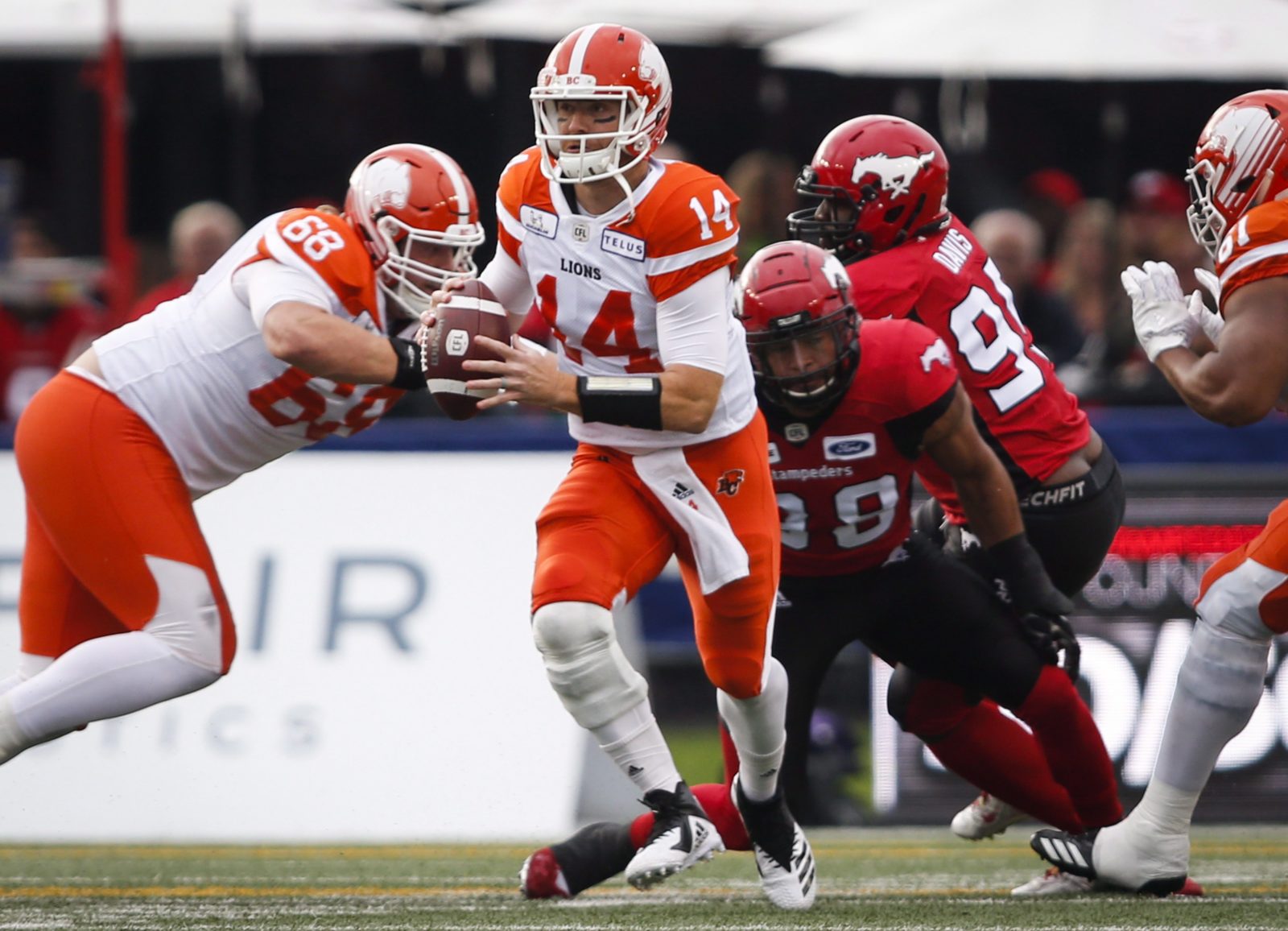 Tyrell Sutton has been waiting for this opportunity. Two weeks after he was brought over in a trade with the Montreal Alouettes, a move GM Ed Hervey publicly stated was made for games like this, the bruising back is ready to scratch a big item off his CFL bucket list: the playoffs.

A veteran of 76 regular season games, the product of Northwestern has yet to strap on the pads in post-season play- ironically, Brandon Rutley started in his place the last time Montreal qualified; 2014 when they took down the Lions 50-17 in the Eastern Semi-Final- and now Sutton has a chance to change that.

The first mountain to climb may resemble that of Everest as Sutton and the Lions (7-7-0) visit the CFL-best Calgary Stampeders (12-2-0) on Saturday night. After a few lean years with the Alouettes, Sutton is ready for the change of pace down the stretch.

“I’m excited as hell to be here,” exclaims the running back.

And what a performance those big boys up front have to build on. Their work in the trenches allowed Jeremiah Johnson to run for 118 yards in last week’s victory over the Toronto Argonauts. Facing a Stamps defence that boasts a couple of beasts up front including Micah Johnson (second in the CFL with ten sacks) and elite linebackers Alex Singelton and Jamar Wall, they know a similar outing must be in the cards.

“It was the first 100-yard game we had all year. I just want to continue doing that,” explains Sutton.

“The biggest challenge is for us to be consistent, be physical and to play our game. It’s not about Calgary. It’s about us. We’ve had a lot of mistakes that we’re correcting in practice so as long as we take that attitude and formula into the game, we’ll be good.”

The intriguing piece to this backfield puzzle is Jeremiah Johnson. The third-year Lion is staying on the roster and will be used to complement Sutton, while also contributing in the return game. What few people may realize is the two running backs have crossed paths before, including when they were both members of the Carolina Panthers in 2010.

“It’s a little reunion over here, I’ve known JJ for a good ten years. We met at the (NFL) combine ten years ago, crossed paths again in Carolina and now we get to do it again. We’ve been friends ever since then,” says Sutton.

“I’m only here to enhance. I know that his niche isn’t necessarily being the power physical back and that’s all I wanted to bring in here. I just want to bring that force, that power and put a little bit of fear into the defence.”

Never one to balk at a change in his role, even if reduced, Johnson is excited to suit up with his old friend

“It’s most definitely going to be an ugly monster,” states Johnson.

“You’ve got two guys that’s willing to run the ball very physically and that’s what we’re all about. Tyrell and me are all for it. If it was up to me we’d be on the field together every single play, giving those guys a dose of 13 and 24, keeping guys like Singelton off their feet and having them scratch their heads, wondering what we’re doing. We just want to do everything positively and make sure we don’t leave any meat on the bone.”

One common goal in mind: getting back to the playoffs. Thankfully, fate is in their hands and they know they have a great opportunity ahead of them.

“Absolutely. The guys around here understand the situation that we’re in taking it to heart,” adds Sutton.

“These are the type of guys that were brought here for this situation.” 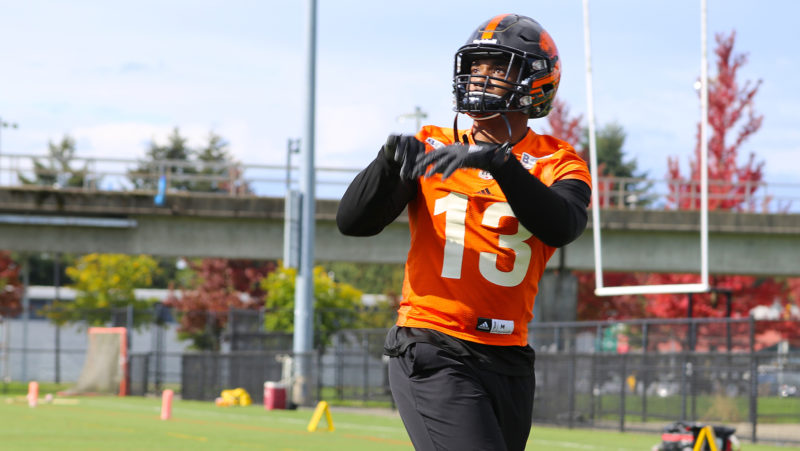 Stampeders last result: a 12-6 win over Montreal on October 8th.

Gameday weather forecast: a few flurries with highs of three degrees Celsius and lows of minus 4. 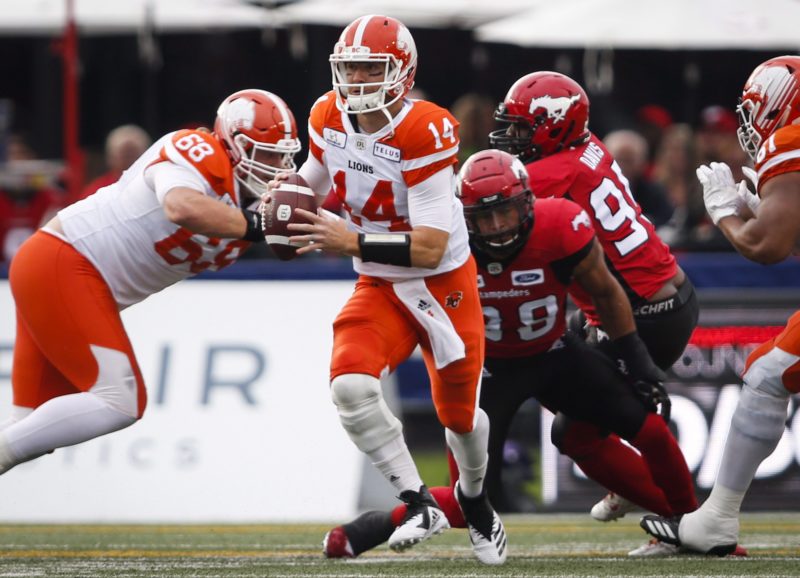 Cowtown swan song? The CFL’s all-time leader in coaching wins is hoping to be back in a few weeks. After all, this is a team that has playoff aspirations and the road to the Grey Cup through the Western Division goes through Calgary for a seventh consecutive season.

Yet, Wally Buono is dealing with the inevitable questions regarding the final regular season game in the stadium he ruled from 1990-2002. Never a fan of making this season about his supposed farewell tour, Buono is taking the ‘business as usual approach.’

“Again guys, I’ve been there a million times,” reminds Buono.

“Every park has memories, but we can’t live in the past. It’s time to move on right?”

As you might expect, his main focus remains trying to solve yet another stingy Stampeders squad that continues to win games despite not looking quite as electric as in years past.

“As long as the nucleus as there, as long as the principles are held up to, they’re going to succeed. They do it their way and their way has been very successful.”

Including his 24 visits as head coach with the Lions, Buono has an overall record of 103-37-1 in regular season games at McMahon. Interestingly enough, the lone tie came in the Lions’ best regular season record in team history when they finished 14-3-1.

The Stampeders have locked up a home playoff date for the seventh consecutive season and need just one more victory and a Saskatchewan loss to clinch first place and a bye to the Western Final.

Playoff scenarios: as we broke down this week, the Lions can potentially lock up a playoff berth if they win in Calgary, then take care of Edmonton next Friday at home. Winning both would guarantee the Lions cannot be caught by the struggling Eskimos based on the season-series between the teams, which is currently even at one game. Four Western clubs are assured of making the playoffs in 2018.

The Lions can still finish as high as second place and earn home field for the Western Semi-Final, although it is a long shot. Here are the two scenarios that can result in a 2nd place finish: they would have to win their remaining four games, while defeating Saskatchewan by at least four points on October 27th, have the Roughriders (10-5-0) lose one of their other remaining two games and Winnipeg Blue Bombers (8-7-0) finish with no more than 10 victories. It can also happen if the Lions beat Saskatchewan by at least four, win just two of their other three contests, have the Riders lose their remaining two games and have the Bombers finish no higher than 9-9-0. The Lions have lost the season series with Winnipeg and must finishg with a better record to earn a higher playoff position. Get all that?

For Calgary, the stakes are also huge this week. A victory against the Lions or a Roughriders loss in Winnipeg and they would lock up first place in the division and a bye into the Western Final on November 18th. The Stampeders are assured of hosting a playoff game for the seventh consecutive year. A loss Saturday combined with a Riders win sets up one heck of a showdown when Saskatchewan invades McMahon next week.

Home cooking: the Stamps are a perfect 7-0-0 at McMahon this season, and have only dropped three of their last 34 home contests dating back to the start of 2014. Including playoffs, the Lions have dropped their last seven trips to Calgary, the most recent victory coming on August 1st, 2014. You get the sense that’s due to change.

TSN 1040 has you covered, beginning with the pre-game show at 3:00 PM with Lowell Ullrich and Chris Burns. Bob Marjanovich, Giulio Caravatta and sideline reporter Karen Surman bring you the action at 5:00 PM. Viewers can watch on TSN 1, while Lions fans south of the border can stream it on ESPN+. Fans in the UK and Ireland can watch on BT Sport.