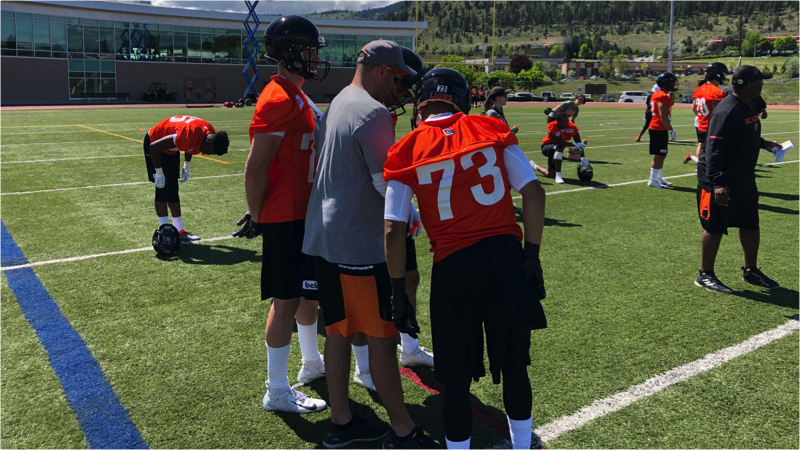 The CFL’s relationship with Mexico may still be fresh and hard for some to get used to, but it’s been 27 years in the making for Gerardo Alvarez. When asked in a chat with bclions.com when he first experimented with “American” football, we had to confirm it was in fact that version of the game he was talking about.

“I was three years old when I first stepped onto a football field,” claimed Alvarez following his first mini-camp practice in Kamloops.

“My Mom Sylvia would always take me to the field. I have been dreaming a long time for this to happen.”

Dedication has indeed paid off for Alvarez. He is now at Lions mini-camp with fellow countrymen Fernando Richarte and Octavio Gonzalez. The trio is also joined by French receiver Benjamin Plu as part of commissioner Randy Ambrosie’s CFL 2.0 initiative designed to gain a foothold in both Mexico and various countries across Europe.

Richarte and Plu will work with Alvarez in the receiving corps while Gonzalez joins an already deep contingent of defensive lineman that will all be on display come Sunday when all hands on deck will be on display in the Tournament Capital of Canada.

If the first day of mini-camp is any indication, the four players have demonstrated they at least have what it takes to stick around for the next couple of weeks. 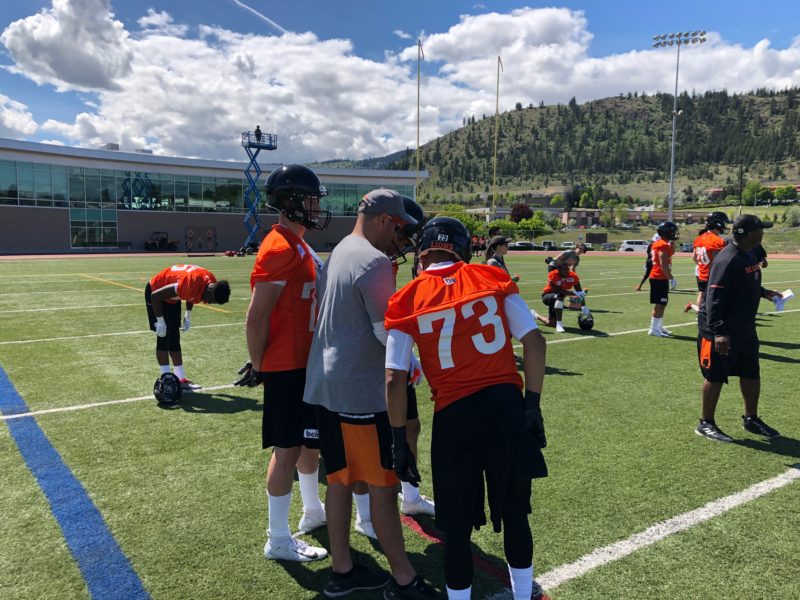 “I’m thankful to both God and the organization for giving me us an opportunity to show our talent. They have told me how great it is going to be to share the field with a QB like Reilly and a lot of receivers I have been already watching in the CFL.”

This marks the second straight Lions camp with an international flavour. Kicker Jose Maltos was in Kamloops last season and made two field goals in a pre-season win at Calgary. He is now with the Ottawa Redblacks. Guest coaches Carlos Rosado of Mexico and Lars Carlsen of Denmark was also on hand in 2018. Rosado returns this year to help get the international players accustomed to the pros.

All three Mexican players bring solid credentials from their home country. Alvarez was named Liga de Futbol Americano’s (LFA) top receiver in 2017 and had the fastest 40-yard dash (4.65) at January’s CFL-LFA combine in Mexico City which preceded each club’s drafting of three players.

A teammate of Alvarez’ with Dinos of LFA, Richarte racked up 275 receiving yards and an average of 10.6 yards per reception in 2018. On the other side of the ball, Gonzalez was a major threat to LFA quarterbacks in 2018 with 7.5 sacks and also blocked a pair of extra points for his Fundirores squad last season. He will have to wait a few days to practice as he recovers from a broken bone in his foot suffered in LFA action five weeks ago. Still, with plenty of depth on the defensive line, Gonzalez hopes to show he can provide the nasty edge head coach DeVone Claybrooks and defensive coordinator Rich Stubler wants that group to play with.

“I bring all of my heart to my team and I’m a winner,” said Gonzalez.

“I hate to lose so I put all of my strength and speed to the test. I like to play physical and pancake my opponents.”

Like Alvarez, he started playing the game as a young kid and was just hoping for the chance to play it for a living.

“I was about six years old and pretty big for my age,” he added.

“I started as a fullback for this team, the Hawkeyes, in Monterrey. I have liked running people over since I was young. Once I take the pads and helmet and put them on, that transforms me into a completely different person.”

In European draft pick Plu, the Lions have a receiver with experience on this side of the pond. The native of Le Mans, France played the 2016 U SPORTS season with the McGill Redmen before turning heads with the Central European Football League’s Thonon-leis-Bains Black Panthers. Plu had a European-best time in both the shuttle and three-cone drill at this year’s CFL Combine in Toronto.

“I’m thrilled to be here and to help show France is developing as a football nation,” said Plu.

“We need to expand our talent into the United States and Canada.  I know this is a very good team and I am very proud to be here. Playing at McGill was probably my best year of football. The university competition allowed me to improve my skills and also practice my English (laughs). It was very great for me. ”

And what about the chance to catch passes from some guy named Mike Reilly in a couple more days?

Commissioner Ambrosie isn’t shy when talking about his mission statement with CFL 2.0. He’s right when he reminds observers that pretty much every other pro sports league took a giant leap of faith when originally testing the waters for international players. And it worked out just fine.

And as we have already learned: it’s not like all of these players just decided to pick up the game yesterday.

“A lot of times sports interest comes from our fathers, but it was my mother who first took me to the field and developed my passion for football,” added Alvarez.

“We can’t wait to experience this as a family.”

The prospects will be back on the field in Kamloops for two more sessions. Both take place from 8:30 AM- 10:20 AM on Thursday and Friday at Hillside Stadium. Main camp gets going Sunday morning at 8:30 AM. All practices are open to the public. You can view the entire 2019 training camp schedule HERE.