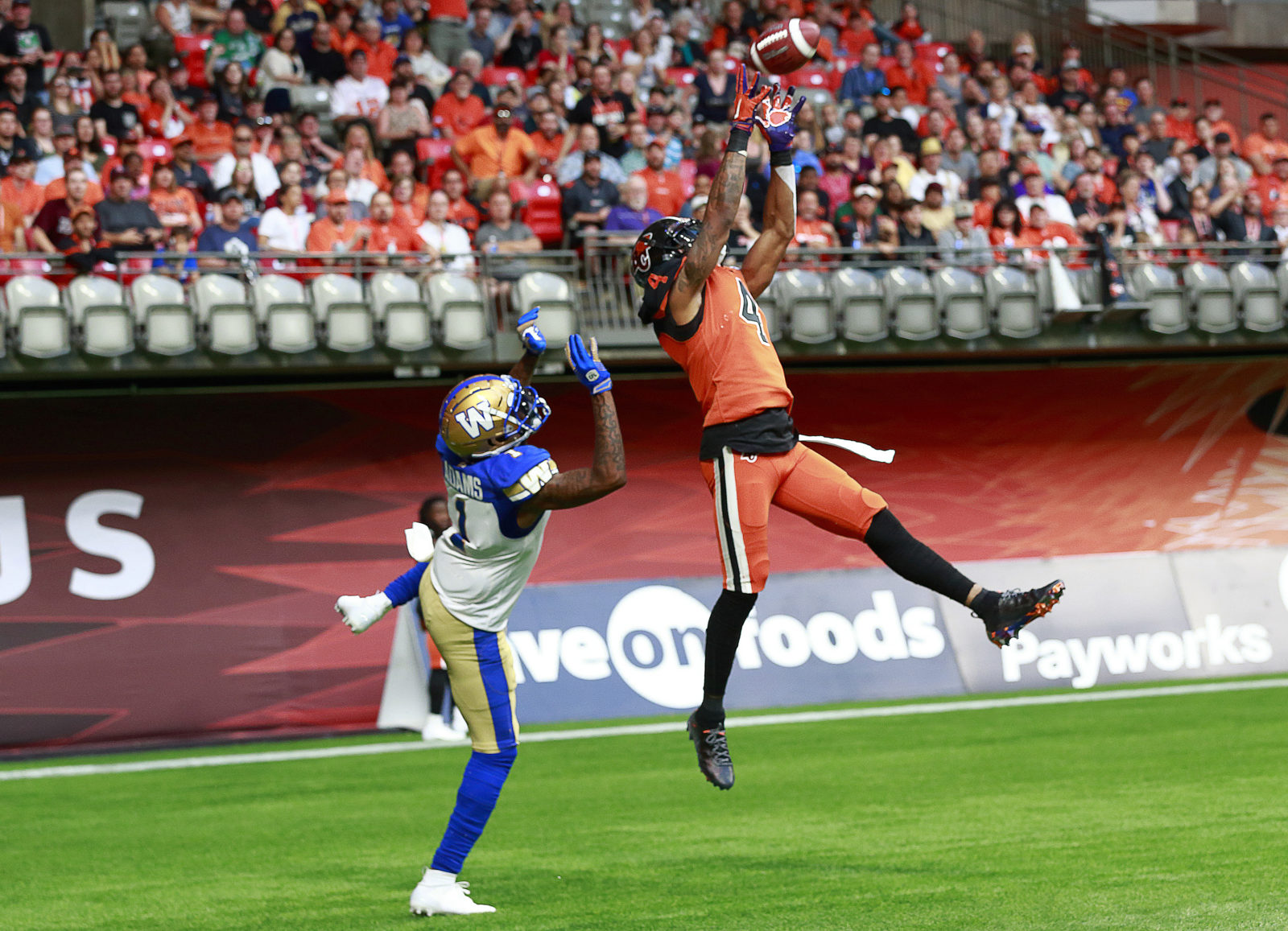 It’s a word general Manager Ed Hervey has spoken several times when talking about the building of his 2020 BC Lions….

Sure, this is a team that went 5-13 and missed the playoffs in a 2019 season that came with such high expectations. But you can look down the list of veterans that have been signed to new deals and understand the importance of what Hervey is preaching. Garry Peters represents just one example.

“We had a sour taste in our mouths last season and there was no way I could go and sign somewhere else,” explained Peters who inked a two-year deal hours before the February 11th free agency period opened.

“Ed has brought in a few new key pieces that combined with those of us who are back should make us a much better squad.”

Yet, as Peters and his returning teammates learned last year, it means nothing to make such proclamations before the calendar even turns to March. They have to go out and earn it. When you look down the roster at the list of returnees, it’s hard to not understand the excitement. Fellow veteran defensive backs Aaron Grymes and T.J. Lee are also back for two more years. Victor Gamboa, a raw rookie defensive back who saw action in seven games in 2019, is poised to play a bigger role in the defence this season. 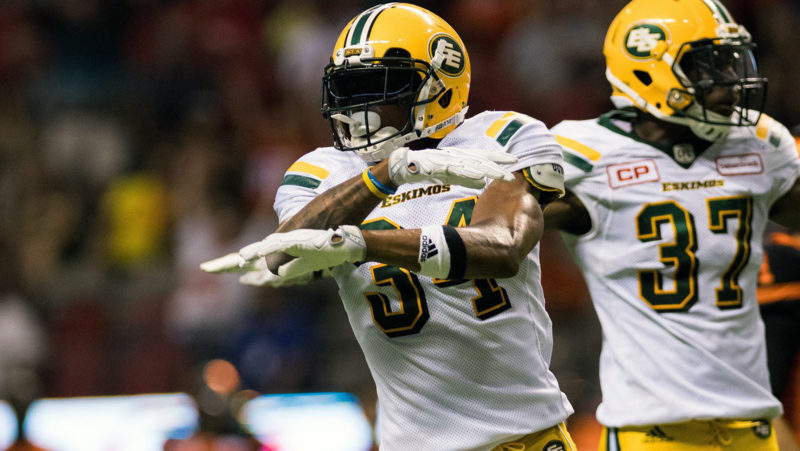 Garry Peters (front) and Kenny Ladler (37) are reunited with the BC Lions after two seasons together in Edmonton.

Peters also played a huge role in this week’s signing of Kenny Ladler, a fellow Georgia native whom Peters knew well in advance of their time together with the Edmonton Eskimos from 2016-17.

“I’ve played with him since we were six years old,” said Peters, “I probably recruited him the hardest. The thing about me is, I want to be around the best players. A guy like Kenny on our team means everything. After we played schoolyard ball we always trained together. I talk to him every day.”

“It’s crazy how we started out playing together as kids, then we became opponents in middle school and ended up back together in Edmonton,” Ladler told bclions.com.

“Garry has been one of my good friends my entire life so it’s amazing how he was able to help get me there to BC. He has told me a lot about the team and how we’re going to have a real good chance to win the Grey Cup. It was a no-brainer. We’ll just let our play do the talking.”

The Peach duo now joins the Seattle Grunge trio of Lee, Grymes and Gamboa as this Lions defence looks to turn things around in 2020.

“I’m ready to help us finish what we have started,” adds Peters.

“I talk to those guys all the time. I’m constantly in their ear, seeing how they’re feeling and what their opinion is on certain things. Playing with TJ and Grymes here as well as with Grymes in Edmonton, it’s comforting going up to a guy and not being afraid of what to give them in terms of feedback. We know each other so well that making sure we can all be better is going to help us in the long run.”

In conversation with bclions.com for a feature that ran last month, Grymes also spoke highly of the continuity at their position while referencing the relationship he and Lee have shared since they were teammates at West Seattle High School.

“We talk about it all the time, just how crazy it is after all these years that we’re on the same defence together,” said Grymes of playing with Lee.

“It’s not just about football with us but hopefully we can be together for the rest of our careers.”

Now the organization is banking on the overall continuity playing a role in their expected turnaround.

A Man on a Mission

Peters is also in a different state of mind going into his third season in orange and black. After hitting the free agent market and not agreeing to a new Lions deal until February 15th of last year, Peters entered training camp on a mission.

The former Clemson star recorded a career-high four interceptions that tied him with Lee for the team lead while his 63 defensive tackles were good for fourth overall on the squad. The increase in production earned him his two-year extension before the free agency period began this time around.

“It’s never easy when you’re not under contract but I knew BC was still where I wanted to be all along,” explained Peters.

“Part of that process is seeing where other guys are leaning and trying to convince other guys to join us. That (last year) was indeed kind of stressful, but I’m just glad it all worked out. RP (defensive backs coach Ryan Phillips) really zeroed in on me. With him, it’s all about watching the film, making sure I had my keys down and getting the little things off the film that carry over into the week. I’m going to be watching even more film this year.” 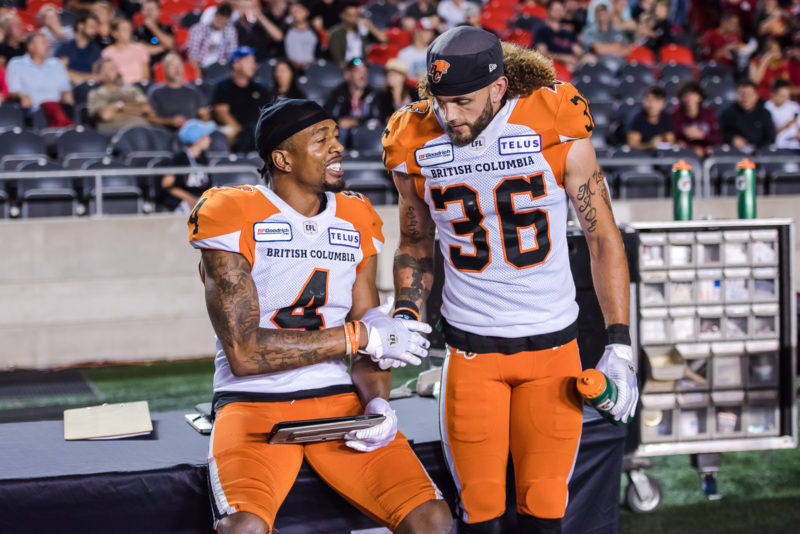 Garry Peters and Aaron Grymes during a BC Lions victory in Ottawa in 2019. Photo: Roch Lambert/Marc Bourget.

“Being able to watch those guys work and look at their technique is only going to make my game better,” claimed Peters.

“I’ve always been around elite guys. A future Hall of Famer like Eric, you want to soak up all you can from him.”

And of course, the overall focus will remain on the present day. Let the prognosticators forecast what they think will happen in November.

“That’s the mindset I share with all the guys on our team. It’s cliche, but it’s one day at a time, one game a time. I feel going into this year we have a real formula, a real identity. It helps that all of us that are back all no each other. Now we have to focus from day one.”