Who was the best player to wear number 16 in BC Lions’ history? That’s the question we will try to answer today. There have been a number of quality candidates to choose from, but we have decided to nominate our current number 16, Bryan Burnham, and two former quarterbacks in Buck Pierce and Matt Dunigan.

The fans will be making the final decision, so please make sure you scroll down to the bottom of this article and cast your vote.

Bryan Burnham’s path to CFL stardom has had a few twists and turns. It took a little while for the Tulsa University alum’s career to take flight, as he toiled on the Lions’ practice roster and spent much of his first two seasons in a reserve role. However, that all changed in 2016, as Bryan became a household name catching 79 passes for 1,392 yards and three touchdowns.

The Leos may have struggled collectively last season, but for Burnham, 2019 was a year for the ages. His first season working with Mike Reilly proved to be his best as a pro. He put up gaudy numbers, registering an even 100 receptions for 1,492 yards and 11 touchdowns. All of these figures represent career highs, and he was the Lions’ nominee to be the CFL’s Most Outstanding Player. 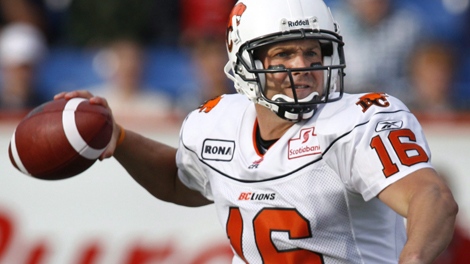 The former New Mexico State star joined the BC Lions ahead of the 2005 season. Buck began his career buried behind Dave Dickenson and Casey Printers on the depth chart, but he ended up seeing significant playing time in each of his first two seasons thanks to injuries. Buck impressed while filling in for an injured Dickenson in 2006 and 2007, opening the eyes of Coach Wally Buono in the process.

The 6’1” signal caller ended up beating out Jarious Jackson for the starting job in 2008 and went on to have his best season as a Lion. Pierce threw for 3,019 yards and 19 touchdowns across 18 appearances (11 starts) en route to leading the Leos to the West Final. Additionally, he set the Leos’ all-time record for completions in a single game with 38 connections against the Montreal Alouettes on August 29, 2008.

Buck made 91 appearances with the Orange & Black, including 35 starts across six seasons in Vancouver. His career was derailed by injuries, but he still managed to accumulate 8,964 yards through the air, 51 passing touchdowns, 1,033 rushing yards and nine majors on the ground with the Lions. He signed with the Winnipeg Blue Bombers following the 2009 season. Buck spent the better part of four seasons quarterbacking the Bombers before returning home to BC for one final tour of duty with the Leos. Buck started the final game of the regular season in 2013 before calling it a career.

The 38-year-old made the switch to coaching in 2014, signing on to mentor the running backs in Winnipeg. He has since had a meteoric rise through the coaching ranks, becoming the Bombers’ offensive coordinator and quarterbacks coach in 2020. Known for his football acumen and toughness, it surprises no one that Buck has made a name for himself in coaching. 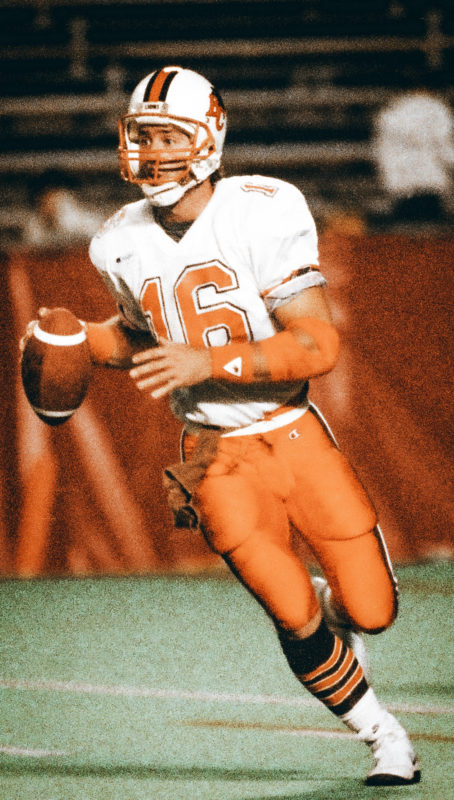 Succeeding Warren Moon as Edmonton’s starting quarterback in 1984, the Louisiana Tech product proved to be a star for Edmonton. Dunigan led the Eskimos to the Grey Cup in 1986 and 1987, winning the title in ’87. He was pushed out of town the following season to make room for Damon Allen, and the Lions were more than happy to take the talented signal-caller off Edmonton’s hands.

The BC Lions acquired Matt Dunigan from Edmonton in a blockbuster, eight player trade ahead of the 1988 season. The gunslinger arrived in BC to much fanfare. Dunigan and the Eskimos beat the Lions to advance to the Grey Cup in 1987 and the Leos were hell bent on exacting revenge in ’88. The hard-nosed veteran had a phenomenal season for BC, earning a CFL All-Star selection after throwing for 3,778 yards and 26 touchdowns. The Lions got the revenge they so desperately wanted when they beat Dunigan’s former squad to advance to the ’88 Grey Cup. They ultimately came up just short in their quest, but it was one of the most memorable seasons in franchise history.

Dunigan spent one more season in Orange & Black before being shipped off to the Toronto Argonauts in 1990. Across 35 appearances with the Leos, he compiled 8,287 yards through the air, 53 passing touchdowns, 898 rushing yards and 16 rushing touchdowns. His time in the dome might have been short, but it was certainly memorable.

Matt played with a charisma that has carried over into his current profession as a broadcaster for TSN. Something about his southern drawl fits perfectly on the TSN CFL panel, and his knowledge of the game adds to entertainment for fans. The Calgary Stampeders lured Dunigan away from TSN in 2004 to be their head coach and general manager, but his time with the organization was short-lived and he made a return to TV in 2005. Matt has also entered the world of publishing, as he wrote a cookbook entitled Road Grill in 2008.

So, who’s it going to be? This is a tough decision and you can’t go wrong with any of these players. For my money, I would choose Bryan Burnham. His career with the Lions is far from over but he has already established himself as one of the top pass-catchers in franchise history. Buck had a great career and Dunigan is a CFL legend, but Burnham wore number 16 the best for the BC Lions.