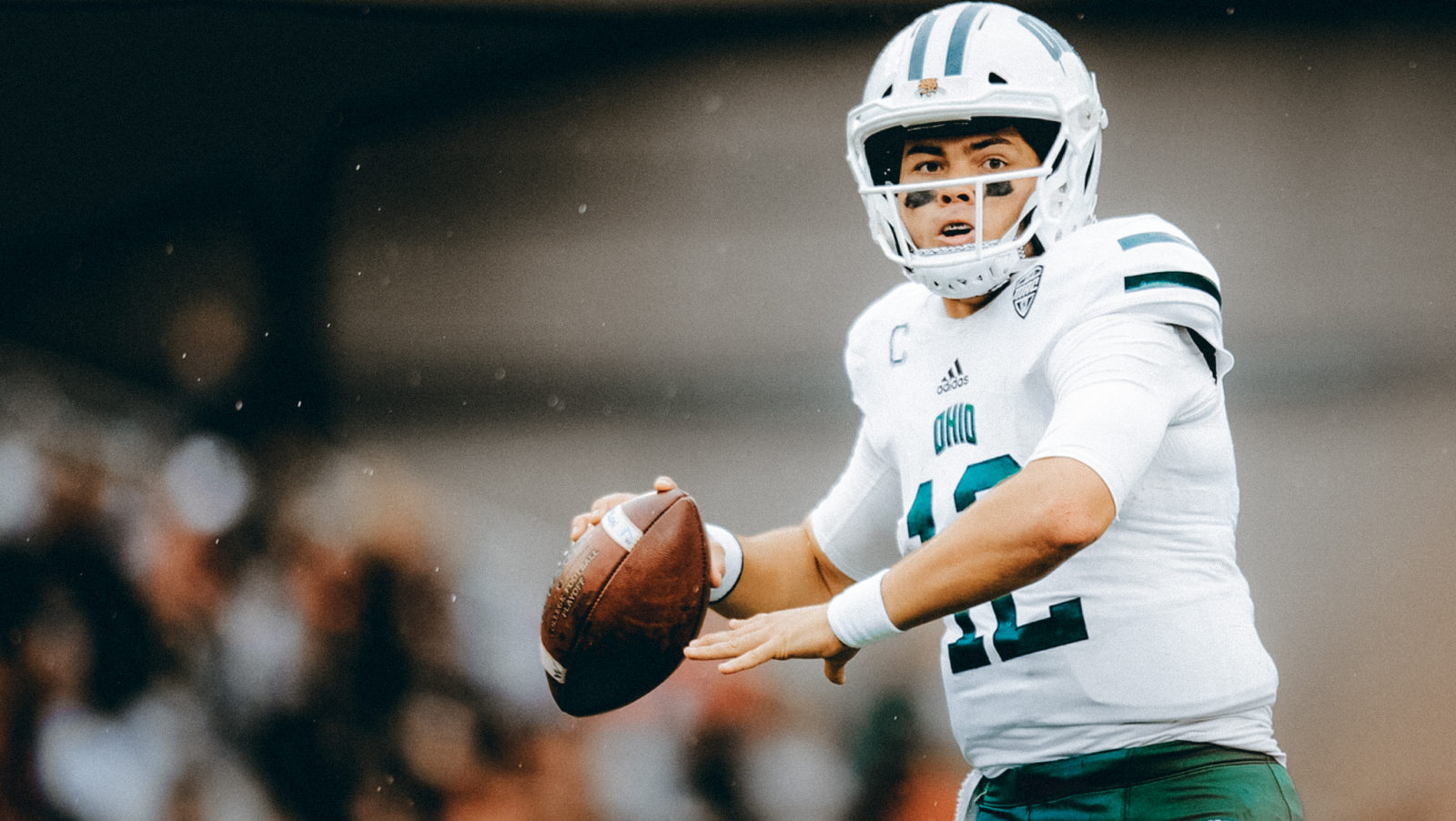 Lions’ second-round draft pick Nathan Rourke has experienced them all. From the glitz and glamour of Division 1 football to the grind at junior college, the former University of Ohio and Fort Scott Community College quarterback recalls his college highlights.

To chase after the NFL dream, Rourke chose to move across the border to learn about the American game. He attended Edgewood Academy in Alabama for his senior year of high school, where he threw 59 touchdowns for 3,779 yards in an undefeated season and capped off the year with a state championship. But none of that was enough to catch any Division 1 school’s attention.

“It was for two weeks and extremely tough. They were trying to get people to quit because they had so many guys. I just remembered being physically exhausted by the second or third day,” Rourke said.

He only spent six months at Fort Scott Community College, yet it was quite memorable. The program was featured in one of the episodes in Season 3 of Last Chance U, a Netflix series about the reality of junior college football. Rourke said his experience two years before the exposure of that particular season was very similar.

“Everything there about junior college, you really find out if you like football or not,” he added.

“The town is extremely small, not a lot going on. So, we had to focus on academics and athletics if you’re really going to be able to make it out and have an opportunity to go somewhere else.” 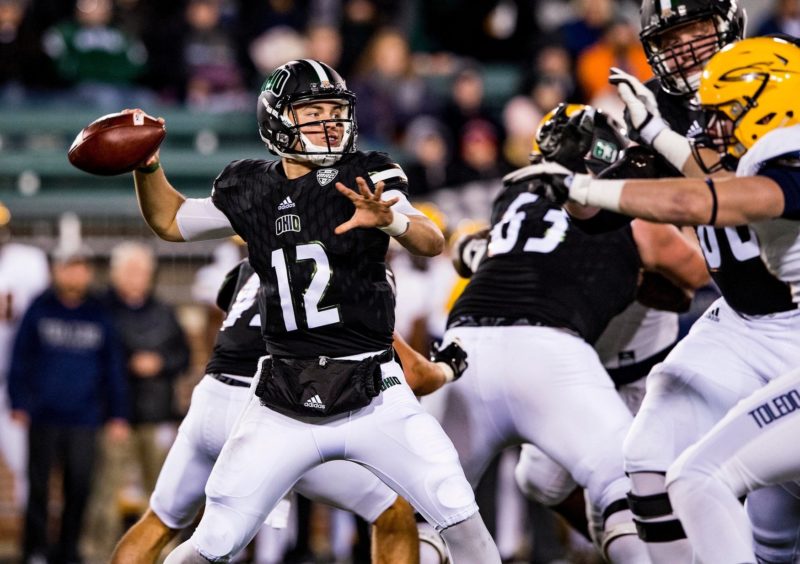 Rourke was able to add more game tapes into his highlight and move onto Ohio the next January. Just like any other junior college player wishing to receive an offer from Division 1 schools, Rourke was dialed in to compete and carried that mindset over the following years.

Once he arrived at Ohio, Rourke said it wasn’t smooth sailing either because he wanted to get the starting job — all for the better good of the team.

Rourke entered the University of Ohio as a sophomore, having to compete with the previous quarterback who led the team to conference championship the year prior. Rourke said the competition got the best of each other.

Even when Rourke won the starting role, he and fellow quarterback Quinton Maxwell were battling each day to see who had the edge to lead the offence.

At the end of Rourke’s sophomore season, a rotator cuff injury slowed down his offseason workouts and he missed spring ball. The two quarterbacks were challenging each other for the starting role in the next season. In the end, Rourke was able to win his job back, but not without the constant push from Maxwell.

“I don’t think I would have developed the urgency to get better every single day, I may have been a little bit more relaxed. I was really fortunate for him to be pushing me whenever I’m feeling comfortable,” he said.

In three seasons with the Ohio Bobcats, Rourke threw for 60 touchdowns, ran for 49 on the ground and caught two scores in his colligate career. Not to mention the former All-MAC first-team quarterback led the team to three straight bowl victories from 2017-2019.

But one of Rourke’s favourite games was against Northern Illinois University in 2019, where he had two passing touchdowns, a rushing touchdown and a receiving touchdown off a trick play.

The identical trick play is more commonly known as the ‘Philly Special.’ Rourke said other college teams had run the play before it got famously executed by Nick Foles and the Eagles in Super Bowl LII. Rourke and the Bobcats first pulled it out of the playbook in 2017 and it resulted in Rourke catching the ball in the end zone.

“It was a play that we had run in my sophomore year and it had worked against Akron. We practiced it all week and the easiest part was the execution. Like I’m going up and audibling a play, then we snapped it while I’m at the line next to the tackle,” said Rourke on breaking down the trick play.

“Just focusing on making sure that operation was right and everything. The receiver got hit as soon as he threw it to me so it was a little low. I had to make sure I secure the catch. It’s one of those plays that you’re really glad it worked because if it didn’t then you’re going to look like a fool.” 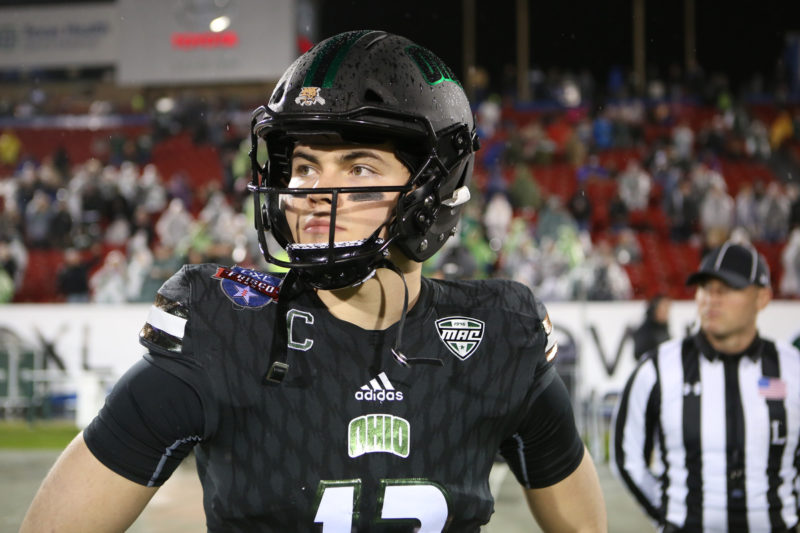 Rourke recalled the time when his team had just lost a heartbreaker to rival school, Miami University in Oxford, Ohio by only two points. The Bobcats were mathematically eliminated from the conference championship in 2018, but they still showed resiliency the next week against the University of Buffalo who would go on to play in the MAC Championship.

“Buffalo was leading our division, they were the frontrunner to make the MAC Championship. It was a midweek game, we came out and absolutely destroyed them,” he said. “I was really proud of that team effort, not giving up even though it didn’t mean anything for us to really put on a show in front of a national audience.”

Despite losing to Miami University 30-28 the week before, the Ohio Bobcats didn’t let the last few games of the regular season go to waste. As Rourke said, the team ran over their division leader Buffalo the next week with a score of 52-17. The Bobcats would conclude the 2018 season raising the Frisco Bowl over San Diego State with a dominant 27-0 win.

As the Victoria native now makes his transition to the pros, he and Lions fans everywhere will count on that big game college experience coming in handy.