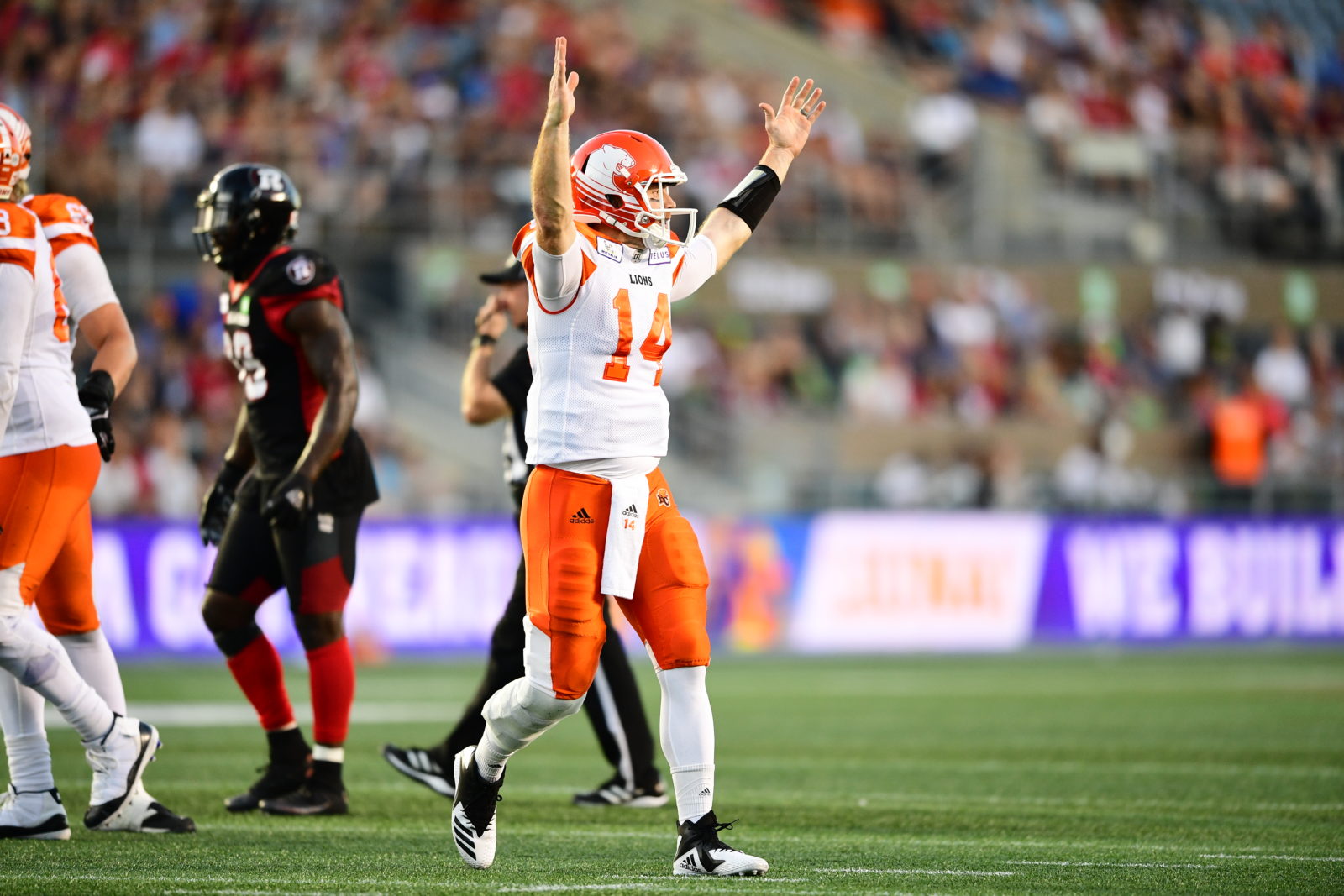 With Labour Day in the rear view mirror and the summer barbeques coming to an end, it serves as an abrupt reminder that the autumn leaves are about to fall and the beautiful downtown Vancouver skyline will soon be blocked by clouds and mist.

Ironically, some may use the darker weather as a way to describe the BC Lions’ 65th season to date. As a proud Seattle native, defensive back TJ Lee is used to that bone-chilling rain. His response? It’s time to embrace it.

“The receivers are going to be a bit more cautious of the ball. It’s going to be slippery, obviously not at home, but we just have to make sure the weather doesn’t alter how we want to play. As far as the weather goes, it’s the best time of the year. When it rains, the games are much more important.”

With a 3-6-0 record and four points separating them from a playoff spot heading into Saturday night’s home clash with the Ottawa Redblacks (6-4-0), Lee knows the second half must be memorable. The veteran halfback is confident they have the horses to go on a run.

“It will come down to how hard we work,” explains Lee.

“It may not look like it, but we’re detail oriented and we work hard. I feel like most teams when they get to the second half lack those fundamentals or details. We have those, as well as the athletes in this room.”

As one of the elder statesmen in that secondary, it is refreshing to know he still has sky-high hopes for 2018. It all starts tonight against a hungry Ottawa Redblacks squad trying to pull away from the pack in a tight East Division. Quarterback Trevor Harris has some elite weapons at his disposal including running back William Powell and a solid two-headed monster at receiver in Greg Ellingson and Brad Sinopoli. Lee and the defence is expecting one of their big tests yet.

“Yeah, it is,” agrees the former Eastern Washington Eagle.

“We know how they play. They’re going to take what we give them in terms of the short routes and stuff. We need to be more stout on second and long and then on first down make those tackles. We need to generate some kind of turnovers and a short field for our offence. It’s a confidence booster when you can play at home. You don’t want to disappoint your fans. That should give you more of a push to get a win.”

As a member of the 2015 Redblacks team that got hot after Labour Day and went on to an appearance in the Grey Cup, running back Jeremiah Johnson is ready to prove the doubters wrong.

Bring on the misty weather: autumn is truly where the champions are born.

Lions latest result: a 24-21 loss to Saskatchewan on August 25th.

Redblacks latest result: a 21-11 loss to Montreal on August 31st.

Last meeting: William Powell‘s touchdown run in the final minute gave Ottawa a 29-25 win over the Lions at TD Place on July 20th.

Gameday weather forecast: a mix of sun and clouds with a chance of showers and highs of 19 degrees Celsius.

Vegas odds: the Lions are listed as two-point favourites.

Fan Poll
The Lions have nine regular season games left. How many of those will they win?
Between 7-9
Vote
Between 5-7
Vote
Between 3-5
Vote
Submit View Poll Results

LB Micah Awe– he had a week to observe following a bye so we expect the recently re-signed Awe to live up to his ferocious reputation. Awe practiced at middle linebacker for most of the week with Jordan Herdman getting reps in the SAM spot.

RB/KR- Travon Van–  the biggest roster move this week comes at the expense of Chris Rainey as Van will handle the return game and perhaps be utilized in the backfield. In two appearances this season Van has recorded 95 yards on five punt returns and scored a big rushing touchdown to kickstart the comeback in a win over Edmonton on August 9th.

WR Bryan Burnham- with Emmanuel Arceneaux out for at least the next six games, Burnham represents the Lions’ top playmaker at receiver. Number 16 should be embracing his chance to lead the group. 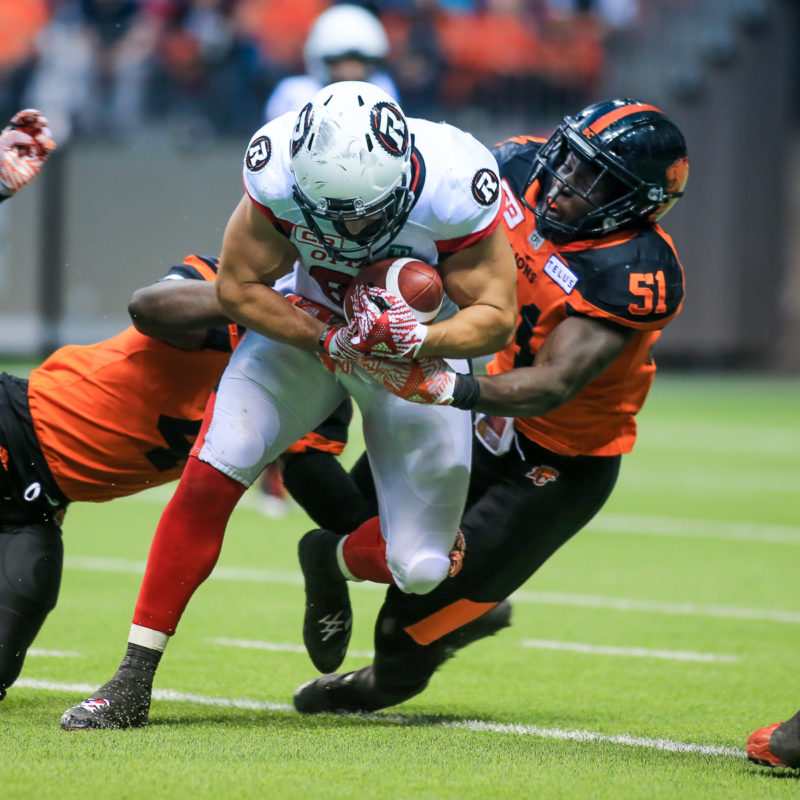 Linebacker Micah Awe makes a tackle during a matchup with the Ottawa Redblacks on October 7th/2017. Photo: Paul Yates.

Three Keys To The Game

Six, Not Three- After having to settle for five Ty Long field goals against Saskatchewan, three of those attempts from inside the 25-yard line, finishing those scoring drives will be a big factor.

Contain the Redblacks Receivers- Ellingson and Sinopoli boast one of the league’s best dynamic duos on offence. It will be a nice test for Lee and the Lions’ opportunistic defence.

Early Statement- coming off their final regular season bye of 2018, they’ll be best served to shake off some rust by starting fast against a hungry opponent.

A couple of tidbits from Wally Buono’s pre-game media availability on Thursday at BC Place.

On what Awe will bring to his defence: “He’s motivated because one, he enjoys football, being physical is a part of his game and that’s something we preach every week about being physical, being smart and knowing what you’re supposed to do. Football, like any professional sport, there’s a certain physicality that has to be a part of the game and the more physical you are, the more opportunities you’re going to have to win.”

On the importance of Friday and not focusing on what’s down the road: “As I said before, you can’t worry about what’s left, you have to worry about what’s ahead right? Friday night’s game is going to be, I think, a critical game for both teams. Obviously Ottawa, they want to keep their position as first in the East, we have to win the games that we have in hand and we have to win the next game because we know the nine games ahead of us are going to be critical.”

Stats of the week: time to give the placekickers some love. Ty Long has made good on all 12 of his field goal attempts at home this season and has made 21 straight at BC Place dating back to last season. The Redblacks’ Lewis Ward is 30/31 on attempts this season and recently broke a record for consecutive field goals made by a rookie (23). Overall, he has made 27 straight since week one. Lee leads all CFL defenders with ten pass knockdowns, three more than any other player so far. How long before we consider Harris one of the league’s elite quarterbacks? Some will say not until he has success in the playoffs, but he currently leads the league in completions (259) and is third overall in passing yards (3,005) behind only Mike Reilly and Jeremiah Masoli.

Since becoming the CFL’s ninth franchise in 2014, the Redblacks have split their four visits to BC Place Stadium. Prior to 2015, the last Ottawa team to win a game at the venue was the Rough Riders on October 6th, 1990. After the Riders folded in 1996, the shortlived Renegades franchise went winless at BC Place from 2002-05.

These Redblacks are the only Eastern team to have a winning record against the Western Division this season (3-2).

Down to the wire again? The narrow result on July 20th was only a continuation of the recent theme when these two teams get together. Overall, each of the last five meetings with Ottawa has all been decided by seven points or less.

Speaking of close games, here’s an interesting nugget from the CFL Stats guru Steve Daniel: Since the start of 2014, the Lions have played in 14 games that were decided by four points or less. The record in those games? Four wins and ten losses.

TSN 1040 has you covered, beginning with the pre-game show at 5:00 PM PT with Lowell Ullrich and Chris Burns. Bob Marjanovich, Giulio Caravatta and sideline reporter Karen Surman bring you the action at 7:00 PM PT. Viewers can watch on TSN and RDS while Lions fans south of the border can stream the game on ESPN+. 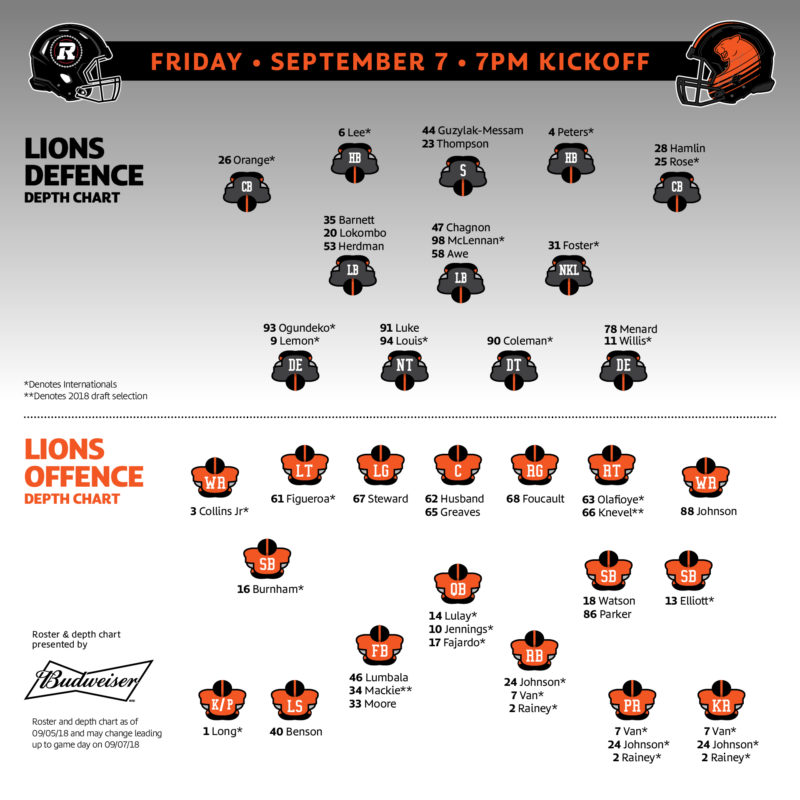