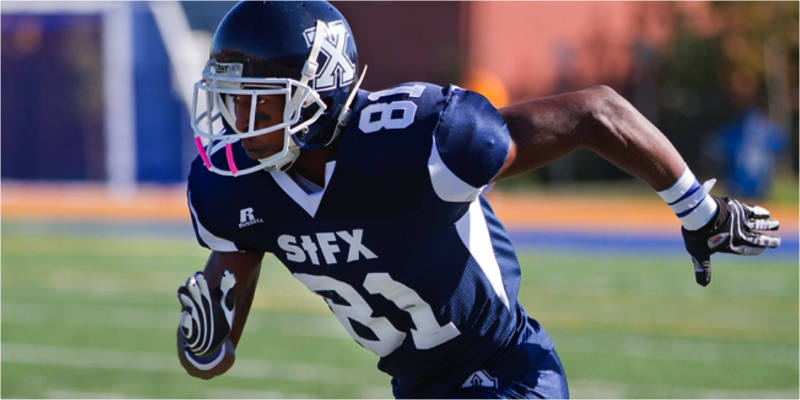 One of Devon Bailey’s fondest moments playing for the St. Francis Xavier University X-Men was scoring in front of his friends who drove from Mississauga to Nova Scotia a few days before his birthday. It was for the annual homecoming game against Acadia University.

The former X-Men standout receiver signed a one-year deal with the Lions back in February, and the 29-year old said it took some convincing from fellow StFX alumni Henoc Muamba and Akeem Foster to persuade Bailey to commit to the school initially.

“It was more so towards the middle and end. I had offers throughout Ontario and the west side of Canada as well. But Henoc and Akeem played a major role in my decision to go to StFX. It really just bound to the lifestyle that was out there, the community and the environment,” Bailey added.

Antigonish, Nova Scotia would then be his home for the next four years.

Competing in Atlantic University Sport (AUS) meant that Bailey would face the same opponents multiple times in one season. Therefore, the games were often closely contested. Teams headed into each week as if they were playing their rivals.

Because the competition was so evenly matched, playing at home would give the team an edge and sometimes even a morale boost. From 2010 to 2013, Bailey was a part of an X-Men team that was rebuilding. While the gameday experience was a blast, they missed the Loney Bowl in those four years.

“When I was there, we lost quite a few games. Like that homecoming game, I told you I had a good time at, we lost that one too,” he recalled.

It allowed Bailey to develop an urge for success. As for the team’s setbacks, they managed to transform into a winning culture under head coach Gary Waterman in the following two seasons. In 2015, StFX captured their first AUS Loney Bowl since 1996 and had won the conference three times in the last five seasons.

Although the X-Men failed to capture the AUS title from 2010 to 2013, Bailey played a significant role on the team. Especially in 2013, the six-foot-five playmaker led the conference with five touchdowns and ranked second among yards and receptions. 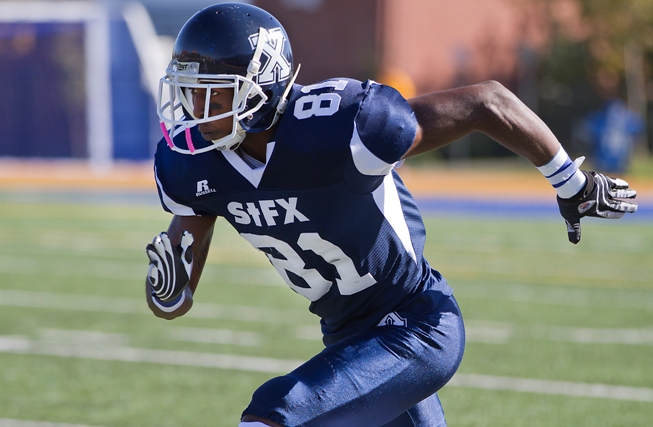 “I was a receiver that wanted to win. Especially in those early years where you’re just hungry to win. When you’re losing and wanted to leave and go somewhere else to a winning squad. But StFX allowed me to develop a passion for hunger,” he said.

“Being motivated by the lack of belief. It gave me the opportunity to establish a mentality of forward in terms of you just got to keep going despite the losses.”

Following an impressive senior season and an appearance at the East-West Bowl, Bailey was listed as one of the top CFL prospects in the 2014 draft.

But he said it was never a dream of his to play professional sports until acknowledging the potential within him.

“It was really just a piggyback ride to go to school, I had no urge to necessarily leave Mississauga. It was more a realization towards my third and final year of university. So when it was happening, it was pretty surreal, to be honest,” he recalled.

“It was very new to me in terms of people approaching me, calling me and asking me about my interest. It was essentially university recruiting trips all over again.”

Despite not getting his hands on the Loney Bowl (AUS Conference Championship), Bailey still cherished the camaraderie in Antigonish, where he learned to thrive as a player, as well as be surrounded by a community that values tradition.

Bailey finished his X-Men career with 87 catches for 1,160 yards and six touchdowns along with AUS All-Star nods in both 2011 and 2012. After consistently being pegged near the top of first-round draft rankings through much of his final college season, he was selected sixth overall by Ed Hervey and the Edmonton Football Club in 2014. He earned a Grey Cup ring with Edmonton in his second pro season and eventually moved on to Saskatchewan from 2017-18 before landing with the Lions in free agency. 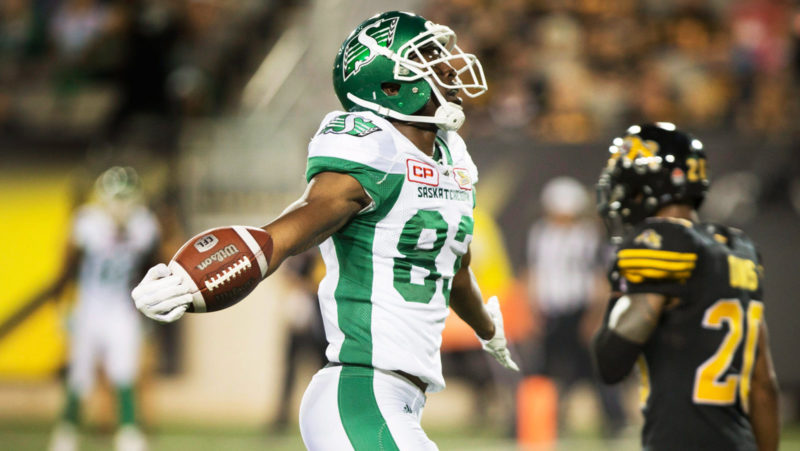 Bailey’s first homecoming game was also his first touchdown wearing the X-Men helmet. To him, homecoming is beyond a typical celebration.

“For a lot of people, it’s just partying. For me, homecoming was special at StFX and I saw it in a good light. Just because StFX as a whole is a very community-based town, where you do see a lot of familiar faces you don’t necessarily talk to. Homecoming gave you no choice but to engage in conversations. It’s really just more so than your meet and greets but an opportunity to create bonds,” he added.

Although Bailey spent the first half of his day prepping for the game, he and his teammates liked to let loose before the tension rises.

A typical game day ritual for Bailey would consist of Kanye West or Kid Cudi before breakfast. Sometimes the church would also be a destined spot to focus on the game.

“Usually eggs are a go, messing around and joking around to get my mind right with one of my great friends Ashton Dickson, rest in peace. Jahmari Bennett, my quarterback. Pretty much music, breakfast, church, friends, game time, touchdown,” Bailey recalled.

“The relationships that I’ve made was definitely something I wouldn’t exchange for anything,” he added.

When Bailey’s CFL teammates asked him where he’s from or which school did he attend, he couldn’t bother but to bring up StFX, where the majority of his teammates thought it’s in the U.S.

He would reply, “No, man. Canada, Nova Scotia.”